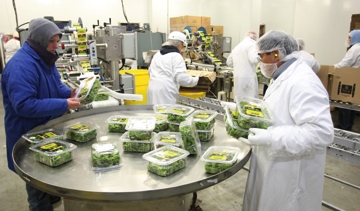 Sometimes buying swampland really does pay off. Dutch immigrants Peter and John Van Winden were studying agriculture in Sherbrooke, in Quebec’s Eastern Townships in 1952 when they bought eight acres of land in Sherrington. After discovering that it was a good place to grow vegetables, Veg Pro International was born. Peter’s son Gerry Van Winden now runs the company, which specializes in processing and packaging baby lettuce and spinach. About 10 years ago, Van Winden saw an opportunity to break into a market where baby lettuce was trucked in mostly from California. Today, Veg Pro is one of the few companies to grow mesclun in Quebec, and its “Fresh Attitude Fraîche” brand is sold in major grocery chains in Québec, Ontario and the Atlantic regions, as well as the East Coast of the United States.

The company has received considerable attention in recent years. In August 2007, Veg Pro International signed a deal with Florida-based Publix Super Markets Inc. to sell its salads in the chain’s grocery stores. And this April Veg Pro International won the 2010 Canadian Export Business Award at the SIAL Canada trade show in Montreal. Then in May it won the award for the Best New Product at the Canadian Produce Marketing Association’s annual convention and trade show for its new, Fresh Attitude brand ready-to-eat salads.

Partnerships with companies in the U.S. and Mexico have also helped the company develop an international presence and its ability to supply grocery chains with lettuce year-round. “In order to have a contract and do business with chains and be able to supply them year-round we had to find a partner on the East Coast,” says Sylvain Racette, Veg Pro’s vice-president of Sales and Marketing. The company began producing baby lettuce in Florida in 2001 in partnership with an American company. “Once we had a foothold in Florida, it was natural to develop those markets as well [as the ones in Canada],” recalls Racette.

Veg Pro’s facility in Napierville, Que. burned in June 2006, but like a phoenix rising from the ashes, a new 40,000-sq.-ft. plant opened in 2007 in Sherrington, 60 km south of Montreal. The $11-million processing and packaging facility prepares salad mixes and pre-washed vegetables in a year-round, seven-days-a-week operation that employs 500 people. Baby greens are packaged within 48 hours of being picked. The company grows lettuce in Quebec on nearly 7,000 acres from May to November. Then it switches to growing lettuce on 1,400 acres in Belle Glade, Florida for the winter. Veg Pro also has a 12,000-sq.-ft. facility in Florida and works with Mexican producers to feed the demand for fresh lettuce and vegetables throughout the winter.

Its Fresh Attitude pre-washed salad mixes include Spring Mix, San Marino, Oriental Mix, Baby Spinach, Baby Romaine and Arugula. Racette says the company used freshness and the clamshell packaging, for which it became known, as selling points with supermarkets. “Given that we are vertically integrated from field to fork, we don’t have three days of transport from California for the product,” he says. “Also, consumers don’t touch the salad as much and break the leaves as they do when it’s in a bag.”

Last spring, Veg Pro launched four ready-to-eat salads in transparent, recyclable packaging with a re-sealable film that allows consumers to see what they’re buying. “It’s more visible than a bag, re-sealable and they can see that the leaves are not damaged,” Racette says. It’s also a Quebec-made product, which, he says “helps with people who want to buy local.” Veg Pro grows lettuce in Quebec on nearly 7,000 acres from May to November; then it switches to growing lettuce on 1,400 acres in Belle Glade, Florida for the winter

The kits include condiments and healthy dressings free of preservatives. “One of the problems with salads is that dressings with added sodium can make it less healthy,” Racette points out. Plastic separates the salad from the condiments and dressing. “When we did focus groups, we discovered that people didn’t want to have the salad dressing in the kit placed in the bag because they didn’t know who put the dressing in the kit.” Veg Pro also wanted to show some originality with its condiments. “It wasn’t just about putting out a salad kit like everyone else,” says Racette. “We have apples, cranberries, pineapples, which seems exotic to consumers.” The Spring Mix features a blend of diced apples, walnuts and dried cranberries; Baby Spinach comes with pineapple cubes, crispy noodles and sliced almonds; and Caesar has the usual croutons, grated Asiago cheese and imitation bacon. The lesser-known Arugula shows up with mandarins, flax crackers and Asiago cheese.

Racette admits that introducing new types of greens that are unfamiliar to consumers, such as arugula, is tricky business. It’s useful to show customers how to properly appreciate the new flavours with appropriate seasoning. For this reason, the company added arugula to its San Marino mixed salad before creating arugula salad mixes on their own. “Consumers didn’t necessarily know how to eat some salads,” explains Racette. “For example, you don’t eat arugula with a Ranch dressing. It’s important to match the condiments so that they’ll have a good experience eating arugula.” Racette says that’s one reason Veg Pro started on familiar territory. “People knew about caesar salad, so we started with that for people who are really conservative – the kind of people who have the same hairdresser for 10 years.”

After testing their products for two years, Veg Pro International launched the four salad kits at the same time to achieve sufficient critical mass to draw consumer attention in stores. “You have three or four seconds to attract a consumer’s attention,” Racette says. “There are lots of SKUs out there, so if you introduce all four of them at once, you have better visual attention.” Reaction to the products has been positive, and as a result the company is now equipping its plant to double production.

Growth is good, but keeping up can be a challenge. “We’re in an industry that depends on Mother Nature in the fields, so we have to be sure when we do promotion and have clients that we are able to supply them with produce,” says Racette. Land in Florida and partnerships with Mexican suppliers have helped the company weather the changing seasons and be in a position to supply their products throughout the year. “We’re a vertically integrated business, so we control our product from A to Z, to the retail store shelves,” adds Racette. “This ensures food safety and quality.”