The annual Food Price Report 2015 is out and says Canadians should expect increases of between .3 per cent and 2.4 per cent in the coming year 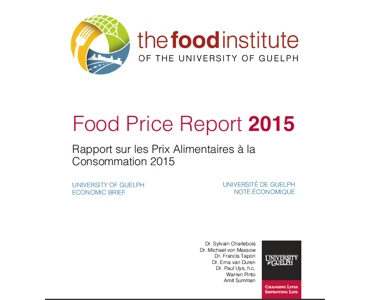 Guelph, Ont. – Overall Canadian consumers can expect to pay a little more for their groceries in 2015, says a recent report.

The Food Institute at the University of Guelph’s annual Food Price Report 2015 says retail food prices will increase between .3 per cent and 2.4 per cent, growing faster than inflation.

The authors of the report say they expect prices for grains, fruits, and food from restaurants to be relatively stable in the coming year.

Consumers have supply management and food packagers to thank for this stability.

The report says dairy and eggs are expected to remain the same price as in the last fiscal year, again due to loss leadership strategies within fierce retail competition.

The impact of droughts and climate effects in 2014 will continue to be felt in 2015, with imported vegetables expected to rise above three per cent in price for Canadian consumers.

Due to the nature of produce imports, Canadians will notice the increase in vegetable prices in the winter months, or perhaps later in the year.

With decreased feed and fuel prices expected in 2015, meat prices will stabilize and will not soar as in past years; and meat is expected to cost Canadians no more than an extra five per cent this year. Pork prices are not expected to experience spikes as they did in 2014. For one thing, the damage of PED on the hog supply is fairly short-term and prices will abate by mid next year.

Sylvain Charlebois, a Marketing and Consumer Studies professor in the College of Business and Economics, says these price increases could lead to some changes inside stores.

“Consumers become more strategic when prices increase, and so do food distributors; since they don’t want to lose market share, they look for better bargains to offer to consumers,” he says.

“Stores and processors may procure from places around the globe they hadn’t considered as much before. They also hedge against the currency as much as they can. In processing, packages and portions will likely continue to shrink.”

Last year’s report said that meat prices would skyrocket, jumping 12.4 per cent. Fish prices also jumped by 5.9 per cent, and are expected to go up again this year as sustainably minded consumers look for specific products. Bacon-loving Canadians felt the price increases the most as prices jumped by 25 per cent. Ham and pork chops climbed by 18 per cent.