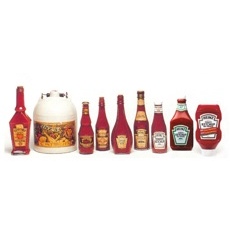 Toronto native Rachael Czutrin is Canada’s Heinz Ketchup Fan of the Century and winner of the $25,000 grand prize. Heinz Canada announced the winner in December.

Heinz Canada celebrated its 100th anniversary this year. To help mark the milestone, the company asked consumers to express, in 100 words or less, why they should be named the Heinz Ketchup fan of the century. More than 20,000 consumers entered.

From weddings to tattoos

According to the company, submissions ranged from the nostalgic to the strange. Consumers wrote about using Heinz Ketchup on toast, popcorn, rice, pickles, soup and even holiday turkey. Others talked about keeping bottles of Heinz Ketchup in lockers and glove compartments, giving bottles as hostess’ gifts and serving it at their weddings.

Other stories told of Ketchup bottle tattoos, bottles delivered by Santa on Christmas morning, and about Heinz Ketchup being included in care packages for those in the military. Reportedly the bottle even accompanied some Ketchup lovers into the great beyond.

Some other notably facts coming out of the contest included:

• 454 people say they carry Heinz Ketchup with them at all times, either in their purse, pocket, or car.

• 115 people who had Heinz Ketchup play a role at their wedding (including one Ketchup fountain).

• Two people claimed they named their children “Heinz” due to their love of the condiment.

As for Rachael Czutrin’s entry, Heinz Canada says she was chosen for her utter devotion to a brand for which she has been an unofficial ambassador her whole life. She enjoys Ketchup on a wide variety of foods, not just the typical french fry, hot dog and hamburger. “I love Heinz Ketchup on pizza,” she wrote.

Heinz Ketchup is something that she just can’t do without – a bottle even traveled with her across Europe. Her passion for Heinz is so well known among friends and family that she has received three “I put Ketchup on my Ketchup” T-shirts from three different people. According to Rachael, “Heinz Ketchup is not a condiment, it’s a way of life.”