Moose Jaw, Sask. – B.C.-based Donald’s Fine Foods is delivering on an announcement it made in August — with the help of a federal government investment.

Donald’s Fine Foods will refurbish the Thunder Creek Pork processing facility using a $1.7 million repayable federal investment. Donald’s will use the investment to purchase new slaughter and meat processing equipment, allowing the company to increase its capacity and meet the demands of an expanding market.

Donald’s Fine Foods made the initial announcement this summer; the federal investment was announced Dec. 3.

The investment will reintroduce a federally inspected pork processing plant into the province, which will create 221 direct jobs. Indirect jobs, reports Farmscape.ca, will include those related to pork production and trucking.

Saskatchewan is responsible for approximately 10 per cent of Canada’s swine production. Donald’s Fine Foods expects to process approximately 300,000 hogs per year at this facility, which is scheduled to open in January.

“We are very excited about our first venture into the Province of Saskatchewan,” says David Pruim, CFO of Donald’s Fine Foods.

“This program has many benefits as it allows us to expand our processing capacity, provides producers a local market for their high quality hogs, and creates jobs in the community.”

In a story on MeatSite.com, the Saskatchewan Pork Development Board says the province has been without any major pork processing plant since 2007 when Mitchell’s Gourmet Foods closed its plant.

The board went onto explain that while the Moose Jaw facility is relatively small, it’s still very significant for Saskatchewan. It also provides another processor that will be providing meat products to the wholesale and retail sector in Western Canada. And it opens doors for producers to consider or at least have a significant player now or in the future. 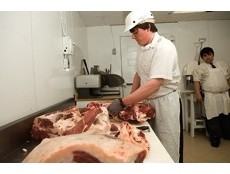