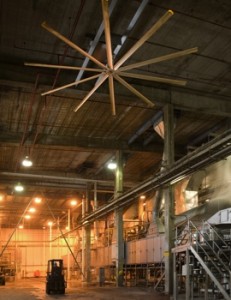 Many food manufacturers dread the costs of keeping their workforce comfortable and product temperatures consistent in spacious workplaces every winter. In other spaces, cold storage condensation can cause product loss and safety concerns. It may seem counterintuitive, but for many facilities the answer to both these issues is most known for its summer cooling abilities: ceiling fans. More specifically, large-diameter, low-speed overhead fans can save facilities a surprising amount on their winter heating bills, with food manufacturers reporting savings of 35 per cent. The air movement from fans also clears condensation and accompanying safety and product integrity problems.

Unlike smaller ceiling fans that struggle to send air to the floor and only create insignificant small portions of air movement, large-diameter, low-speed fans gently mix air to stabilize air movement without creating a draft in winter, using patented airfoils and winglets to allow the fan to operate in the forward direction without causing a draft.

In the winter, stratification occurs because hot air is approximately five to seven per cent lighter than cool air in a space and tends to rise to the ceiling. Large-diameter fans can be used to destratify this heat by moving large volumes of warm air downward, away from the ceiling, without creating a draft. The continuous mixing of air creates a uniform temperature throughout the space, which can help the heater to maintain the same thermostat set point in a space but with less effort. The result is a serious reduction in operating costs.

It’s easy to assume cold storage is elementary – seal and insulate the walls, install a heavy door and turn the thermostat low. However, there is much more involved in maintaining a well-chilled storage facility. Sometimes even the most carefully designed facilities can encounter problems including dead spots and ice buildup. Introducing air movement has proven to be an effective way to curtail these issues and provide a more uniform cold storage environment.

“We have different air pressures in the factory. In the process area you have very moist air that is at higher pressure than the air in the freezer. What happens is that moist air comes down through the freezing tunnels and out the conveyor holes in the wall and infiltrates the freezer,” explains chief engineer Geoffrey Aitchison.

A 24-ft. diameter Big Ass Fan proved to be a simple solution. “After two weeks the ceiling was completely clear and it has been ever since,” says Aitchison. “The air is circulating, plus we’re warming the ceiling to the same temperature as the air, so the frost isn’t going to stay there.” With great success in its freezer, McCain Foods added another 24-ft. fan to its processing area, where condensation was forming on the ceiling above a processing tank and constantly growing mould. Just like in the freezer, the tremendous air circulation abilities of the fan kept the ceiling and air temperature consistent, preventing the moisture buildup that allows mould to form.

Along with reducing condensation and creating consistent temperatures, Big Ass Fans also aids McCain Foods’ energy efficiency plans. Since the installation of their first fans in 2007, McCain Foods Canada has installed additional fans in other locations. “Our Big Ass Fans are a tremendous solution to the problem we had concerning energy conservation and satisfying the CFIA requirements,” says Aitchison.