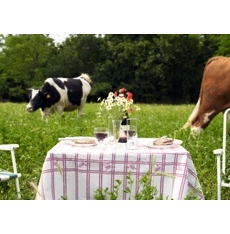 To help boost the beef industry, a group of farmers in B.C. is testing out a new niche market: wine-fed beef. A story on Canoe.ca reports that one of the producers, Southern Plus Feedlots in Oliver, B.C., is trying to produce a beef product that is equivalent to Japan’s Kobe beef.

The owner of Southern Plus, Bill Freding, says he began feeding wine to cattle to supplement their grain diet last November.

The beef was then served at a special event at Government House in Victoria, B.C., where a food writer said the beef was “equivalent or even better” than Japanese Kobe, American Kobe or the American Wagyu.

Freding describes the beef “as a little more tender compared to other products, including the Alberta Black Angus beef.”

He says it has a brighter red colour and does have a different flavour, almost sweeter, though he wouldn’t describe it as a wine flavour.

Along with their diet of mainly grain, the cattle are fed one litre of wine per head, which Freding says works out to about the same as a person having a glass a day.