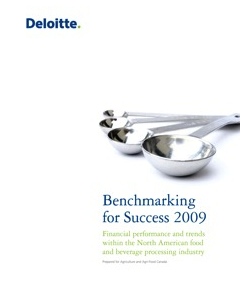 A report from Deloitte & Touche LLP has found that Canadian food and beverage manufacturers have closed a longstanding margin gap compared to their counterparts in the U.S. In the report, entitled, Benchmarking for Success 2009, the authors say “Canadian and American processors now perform about equally on EBITDA as a proportion of sales, whereas U.S. organizations enjoyed a sizable advantage in earlier studies.”

The 2009 report analyzes industry data for the fiscal year ending in 2008 for 76 food and beverage companies in Canada and the U.S. Approximately one-third of those companies are Canada-based.

Since the report was last published, in 2002, the authors write there has been a significant amount of consolidation in the North American food and beverage processing sector.

The report notes that there were 147 publicly traded companies in North America primarily engaged in the food or beverage processing business. By 2009 that figure had fallen 17 per cent to 122, despite total revenue increasing by nearly 50 per cent over the time period.

In Canada that figure was even more pronounced where the number of these processors decreased from 35 to 25 in the time period, a drop of nearly 30 per cent.

The Deloitte report notes that through its findings and other surveys, food safety has gained prominence across the globe.

Among Canada’s food and beverage processors the concern is also widespread. The study reports that 50 per cent of respondents took concrete measures toward a recognized safety certification and/or process improvement in 2008.

Research from AMR and a Deloitte survey also found that:

• 83 per cent of consumers can name a product that was recalled in the last two years because of safety concerns;

• 57 per cent of consumers have stopped eating, either temporarily or permanently, a particular food because of a recall; and

• 76 per cent of consumers report they are more concerned today than they were five years ago about the food they eat.