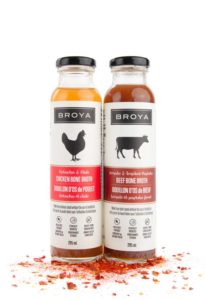 In just four years, explains the Canadian Foundation for Innovation , Toronto-based Broya has grown to an established food company with distribution in major grocery stores. It all started with a freezer full of meat and the recognition that research could help the business grow.

In 2015, Broya’s founder, Tim Sotoadeh, decided he wanted to eat healthier, higher quality meats, so he stocked up his freezer with cuts bought directly from an organic farmer. At that time, bone broth was starting to take off as a health food trend in the United States. It is marketed to improve everything from digestion to sleep. Bone broth is similar to stock, Sotoadeh explains, but it is made by simmering the bones of animals for 10 to 24 hours. It can be sipped as a warm drink or used in soups or gravy.

After some initial product development, Sotoadeh turned to Niagara College’s CFI-funded Canadian Food and Wine Institute for help to make his beef broth tastier and give it a longer shelf life.

Since bone broth is a niche product, he also wanted to branch out to create new flavours for greater mass appeal. The food scientists at Niagara College helped him come up with two new flavours: Tomato & Smoked Paprika Beef Broth and Sriracha & Chili Chicken Broth.

“They have the food safety and regulations know-how, the packaging know-how, and that’s something they need to teach me, because I’m not a food scientist or a recipe developer, or anything like that,” Sotoadeh says. “I sent them product from competitors in the US that I felt I wanted to emulate in some ways. They would deconstruct that product, and almost reverse-engineer it, and understand what was needed to come up with something similar.”

With direction from Sotoadeh, culinary science students at Niagara College tested 100 different recipes. Together, they fine-tuned a dozen of the recipes, then winnowed them down to the two new flavours. Broya products are now available in 300 stores across Canada including Metro, Farm Boy, Whole Foods, Sobeys and Healthy Planet.