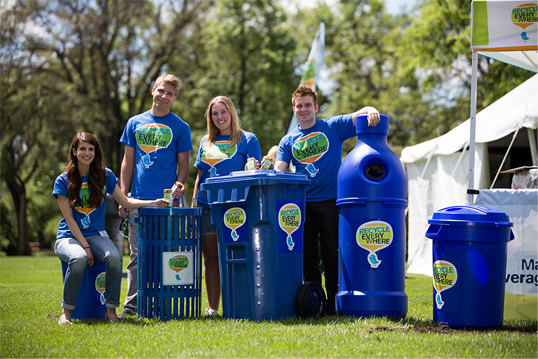 Canadian Beverage Association (CBA) President Jim Goetz and Ontario Environment Minister Jeff Yurek have announced the release of the draft Blue Box regulation. Goetz made the following statement at the event to highlight the association’s support for the proposed beverage container diversion targets of 75% by 2026 and 80% by 2030:

“The beverage sector has long played a leadership role in advancing convenient recycling programs throughout Canada. In Ontario, our member companies were instrumental in establishing the Blue Box program on a province-wide basis. Since then, we, along with other Ontario companies, have made significant investments to support the province’s Blue Box program. In fact, since the current Blue Box program started in 2004, businesses have contributed roughly $1.5 billion.
We now believe it is time to build on the success of the Blue Box by transitioning Ontario’s roughly 250 individual municipal recycling programs into one, province-wide system funded and operated by companies that sell packaged goods and paper products (referred to as producers).
Given the beverage sector’s longstanding support for the Blue Box, we plan to continue collecting beverage containers from homes across Ontario through the Blue Box collection system. To meet the higher diversion targets in the draft regulation, our sector plans to introduce a new, comprehensive beverage container recycling program that will complement the Blue Box collection system with convenient public space recycling at parks, public buildings and special events.
With as much as 40% of beverage products consumed away from home (depending on the beverage container type), it is essential to not only have effective, convenient collection for Ontarians at home, but also to have convenient public space recycling away-from-home. We have seen across the country that increasing access to recycling, along with clear effective promotion and education, leads to higher recycling rates, reduced contamination of recyclable materials and less litter.
With our experience from across Canada, our sector has the expertise and the plan to reach the proposed beverage container diversion targets through a combination of a more effective, modernized Blue Box system, and a public space recycling program modelled after the very successful Recycle Everywhere program in Manitoba.
We look forward to reviewing the draft regulation in more detail and providing our feedback on it – and working closely with the government on helping Ontario move toward a more circular economy.
The Canadian Beverage Association is the national trade association representing the broad spectrum of companies that manufacture and distribute the majority of non-alcoholic refreshment beverages consumed in Canada.”