Canada and the European Union have reached a consensus on the Comprehensive Economic Trade Agreement. Agri-food in Canada has given the deal mixed reviews

Brussels, Belgium – Canada and the EU have signed a tentative deal on a comprehensive trade agreement – and Canada’s processing industry has had a mixed reaction to the news.

The tentative Comprehensive Economic Trade Agreement (CETA) will drop nearly all import taxes on products from food to cars, reports CBC.ca. Canada will also have preferential access to more than half of the world’s economy and the EU’s more than 500 million consumers.

Canadian workers in every region of the country – including in sectors such as fish and seafood; chemicals and plastics; metal and mineral products; technology; forestry and value-added wood products; automotive; advanced manufacturing; and agriculture and agri-food – stand to benefit significantly from increased access to this lucrative 28 country market which currently generates $17 trillion in annual economic activity, says the federal government.

The CBC.ca reports that the deal will increase the number of countries in free-trade agreements with Canada from 14 to 42.

According to a joint study, says the CBC.ca, bilateral trade will increase by an estimated 20 per cent, add a $12-billion boost to the Canadian economy and create 80,000 new jobs.

Other agri-food industry highlights include:

• Full access to EU markets for Canadian fresh and frozen fruit and vegetables, or processed foods.

• No more tariffs for many seafood products, including cooked and peeled shrimp, live lobster, frozen lobster and frozen scallops.

• Canadian beef producers will be able to sell an additional 50,000 tonnes of beef – the current quota is 15,000 tonnes.

• Canadian pork producers will be able to export 75,000 tonnes, a substantial increase to their current 6,000 tonne quota.

In Quebec, reports CBC.ca, dairy farmers say the deal would endanger their livelihoods. The Quebec dairy industry says farmers in the province would lose up to $10,000 a year because of reduced quotas. Quebec cheese makers produce nearly three-quarters of all fine cheese in Canada.

Speaking in Brussels, says the CBC.ca, Prime Minister Stephen Harper said the system of supply management that supports the dairy industry is protected.

The B.C. Seafood Alliance on the other hand says the agreement is good news for the seafood sector. Seafood is B.C.’s most valuable agrifood export commodity worth about $1 billion annually. Wild seafood accounts for almost 2/3 of that total.

The alliance says seafood consumption is growing in the EU and its consumers are prepared to pay high prices for it. B.C. has exported canned salmon to Europe for more than 100 years, but high tariffs have made it difficult to increase exports. The alliance adds that the agreement means new market opportunities for fishermen and processors across the province.

Canada Beef says it is also celebrating the news of the agreement.

The CBC.ca reports that the negotiations aren’t yet done. Some parts of the agreement are still being drafted, while others need fine-tuning. But the most contentious points have been settled. The agreement text then has to be drafted, run past lawyers and translated into 22 languages for 28 EU countries to examine. Full ratification of the agreement is likely two years away. 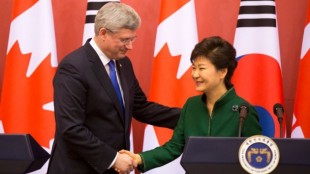