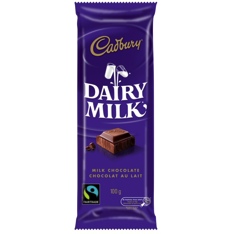 The initiative is part of the company’s 10-year, $80-million Cadbury Cocoa Partnership to support cocoa farmers in countries such as Ghana, where Cadbury sources most of its cocoa.

Cadbury, part of Northfield, Ill.-based Kraft Foods Inc., launched its fair trade Dairy Milk bars in Britain and Ireland last year. The bars have been available in Canada since June. According to the company, approximately 22 million Dairy Milk bars are sold in Canada annually.

As part of the new campaign, Cadbury is featuring a redesigned website, at www.dairymilk.ca, print and online marketing, and even murals designed by a Ghanaian artist, all promoting the benefits of fair trade. Some of those benefits include improved education, better healthcare and access to clean water for more than 40,000 farmers in Ghana, their families and their communities.

Visitors to the site also have the chance to win a trip to Ghana by describing what they think would be a “fair trade” for the trip. Other visitors then vote on what they believe is the most fair trade. The grand prize draw will be held Oct. 6.

The global fair trade process is managed and audited by the Fairtrade Labelling Organizations International and its member organizations. In Canada, Ottawa-based TransFair Canada oversees licensing of products.