The winds of change

Although it’s difficult to predict exactly how climate change will affect Canadian agri-food production, producers can take steps to bolster resilience in the face of the potentially significant changes ahead 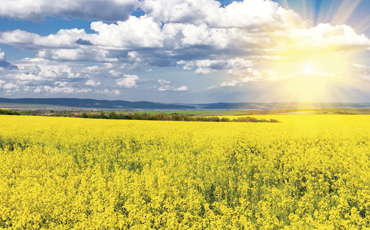 Although it’s difficult to predict exactly how climate change will affect Canadian agri-food production, producers can take steps to bolster resilience in the face of the potentially significant changes ahead

Climate change: those two words are often viewed as scary, overwhelming and perplexing -— not to mention an inconvenient phenomenon that some people would prefer to simply ignore.

But according to Barry Smit, a geography professor with the University of Guelph, ignoring the potential impact of climate change on agri-food production would be a big mistake for Canadian agri-food producers. “Overall, climate change represents a serious threat to world food supplies globally as well as to producers in many parts of Canada,” asserts Smit, who notes that climate change isn’t just about a gradual rise in global temperatures — it’s also characterized by “changes in moisture, and changes in the frequency and severity and timing of extremes: droughts, intense rainfall, floods, the times when you get frost, and so forth,” he explains. “As with any environmental change, there will be some winners and losers; and in Canada there will be some winners in the short term, but overall, this represents a serious risk to production.”

When it comes to Canadian “winners,” wine production may be poised to benefit from climate change, at least in the short term. “With more heat and a longer season, they may be able to grow the higher-value varieties more readily, like the Cabernet Sauvignons and the Merlots and what have you,” says Smit. That said, “in that sector, there are still potential problems with water supply and extreme conditions — intense rainfall can be very problematic for the grape and wine industry.”

Another “winning” area could include certain types of farms in Eastern Canada — Ontario, Quebec and the Atlantic provinces — where “the increase in the growing season could allow producers to use more high-yielding varieties, or maybe grow some different crops, and that’s already evident,” says Smit. “In Atlantic Canada there are some farmers who are already producing some grain corn in areas where they couldn’t do it reliably before. So there are opportunities, but overall they’re outweighed by the risks, particularly those that come with reductions in available moisture and increases in variability.”

An ample moisture supply will be key, as increasingly frequent droughts could become the “new norm” in Canada. So what can farmers do to mitigate the risk? They could switch to a crop that is more likely to thrive in drier or warmer climates, or adopt more effective water storage systems. “Some people buy more water rights, trying to improve their access to water. Others change their operations so they don’t rely so much on crops that are very dependent on moisture,” says Smit. According to Patrick Girard, senior media relations officer with Agriculture and Agri-Food Canada, “the sector’s resilience can be enhanced by information on existing and future risks and opportunities so that informed production choices can be made. Knowledge of climate-resilient management practices and private and regional investments in climate-resilient infrastructure (such as drainage, irrigation, flood protection, water treatment and cooling systems) allow the sector to operate under a range of conditions.”

Evan Fraser, also a professor at the University of Guelph, adds that it’s all about “sensible agronomy to maintain soil health. So not a lot of bare soil in the winter — that’s a bad thing to do because it tends to erode quickly. Decent crop rotation, integrating manure into your nutrient management; not plowing up and down contours, but plowing with contours…these are practices farmers have known about since the dustbowl years as being sensible practices. And then there are low-till practices, cultivating the soil as little as possible. All these things build up the soil…and that has the effect of reducing the impacts of drought. Or floods, for that matter, as heavy rainfall can be very damaging.”

While Fraser believes Canadian farmers should definitely prepare themselves to adapt to the potential effects of climate change, he isn’t overly panicked about the effects on Canadian agri-food producers. “I don’t see climate change, for Canada, as being a game changer in terms of our agricultural system,” he says. “I’m very concerned about these issues in the global south, but I’m less concerned about them in Canada.”

In places like Africa, for instance, Fraser says “they’ve got so little capital and so little ability to adapt, and they’re using such poor quality seeds, and no access to manure…everything goes wrong there. And they’re going to experience more extreme weather changes than we are, so that becomes your perfect storm of problems, and there, I’m far less optimistic.” In Canada, on the other hand, “it’ll be an issue for some farmers, other farmers will see opportunities, we’ll keep investing in technologies…and as long as commodity prices stay relatively stable and farmers use sensible management practices, we’ll be relatively well-buffered from problems,” Fraser explains. “And then even if they really have a bad year, we’ve got crop insurance programs and social security.”

As Fraser points out, the 2014 Intergovernmental Panel on Climate Change (IPCC) report projects that overall, globally, total crop yields may drop by two per cent per decade during this century as a result of climate change — a number that encompasses the parts of the world that stand to fare better in the coming decades (Smit points to Russia, for instance, as one of the potential global “winners” of climate change, agriculturally), as well as the tropical and developing nations that are expected to suffer tremendously. “Generally speaking, that [two-per-cent drop] is less than what we’ve been adding overall in terms of improved economy and better science and technology,” says Fraser. “We are producing more food per person today than we ever have in the past. So the technology and innovation growth is greater than the projected declines due to climate change on an aggregate level.”

That said, on the Canadian side of things, Smit feels that farmers who are reluctant to believe that climate change is having any real impact here — those who think the increased droughts in recent years are just a normally occurring anomaly, for instance — may be in for trouble. “If they choose to believe that this is just an aberration and things will go back to normal soon, well, good luck to them, I hope they’re right. But the scientific evidence points to something else. It’s saying that the increase in the frequency of droughts, the lack of moisture, and the increase in these extremes is going to continue over the next decades,” says Smit. “So if you’re a producer who says, ‘Oh, I don’t believe in all that stuff,’ then I guess you’re just going to have to live with your consequences.”