Why we knead sourdough

Sourdough starter from Blackbird Baking Co. is the first Canadian sample to be inducted into the Puratos Sourdough Library in St. Vith, Belgium 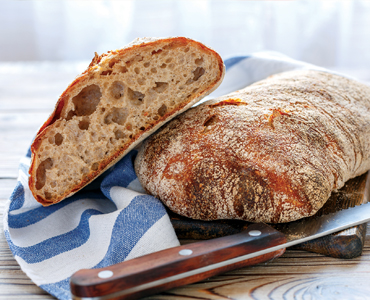 Toronto’s Blackbird Baking Co. is now part of a prestigious group. Let’s call it a culture. The bakery’s sourdough culture, or starter, is the first Canadian sample to be inducted into the Puratos Sourdough Library in St. Vith, Belgium. The library is the brainchild of Belgium-based Puratos, a company that supplies the bakery, patisserie and chocolate sectors.

According to Mississauga, Ont.-based Puratos Canada, this means a sample of Blackbird’s sourdough starter is now housed in the library in a glass jar at 4°C. Library staff refresh the starter regularly with ingredients sent by Blackbird Baking.

Karl de Smedt is the Communication and Training manager for the Flavours and Specialty Ingredients unit at Puratos in Belgium. He’s also the sourdough librarian. De Smedt explains that through the library, which launched in 2013, Puratos is trying to safeguard the world’s sourdough starters, especially those that are disappearing or could disappear, and the microorganisms that reside in them. “We compare [the library] to the seed bank, the Svalbard Global Seed Vault on Spitsbergen,” he says. “If bakers stopped making their sourdough starters, they’re then lost, and we want to prevent that.”

It’s also an insurance of sorts for bakeries and bakers. If anything were to go wrong with their starters, they’ll always have their sample at the library.

What’s so special about sourdough starter?

Sourdough starters are a way of producing bread that goes back at least 5,000 years. Commercial yeast, says de Smedt, only arrived on the scene 150 years ago. He compares the discovery of yeast at that time to other “disruptive technologies” today — those that transform life, business and economies — such as Uber and Airbnb.

Using sourdough starter is a slow, artisanal way of making bread. “The most important ingredient in bread or baked goods is time. By using commercial yeast, you speed up the fermentation process tremendously,” notes de Smedt. “And you remove a lot of flavour and texture. You can do so much better with sourdough starter.”

It also has some remarkable samples of starters. Two of the oldest include one from Japan from 1875, and another from Switzerland from 1886, which comes directly from the bakery that was established at the same time. In some cases, the dates are best guesses, as none of the samples arrive with proof.

There are also some interesting variations of starter, as not all bakers stick to just flour and water. Some add grapes, strawberries, fennel and licorice. According to De Smedt, there’s a sourdough starter from Mexico that includes beer, lime and eggs, and one from Japan made from cooked rice.

Another treasure will be on its way from Canada in May. De Smedt is heading to Whitehorse to meet Ione Christensen, Whitehorse’s first female mayor and a former Yukon senator. Christensen has a sourdough starter from her great-grandfather that dates back to the 1890s and the Klondike Gold Rush.


Related Stories
Health Canada recommends amendment to regulations
Canadian bread producer invests in the U.S.
Which bread is healthier? It may depend on you, says a new study