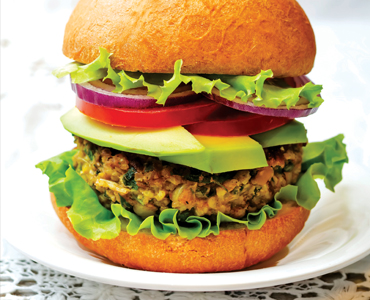 There was a time when consumers seeking packaged, ready-to-eat vegetarian meals had precious few options (think pallid veggie burgers and grey, spongy veggie loaf). But that has changed dramatically, as manufacturers have upped their game and now offer a wide array of frozen, RTE options catering to the growing market for plant-based choices.

Communications at Nature’s Emporium, a Toronto-area mini-chain of health-food stores. “There is growing awareness and interest amongst our customer base, both due to the recognized potential health benefits of skewing toward a plant-based diet, and the environmental benefits of consuming plant-based foods. This is driving interest in these foods not just amongst vegans and vegetarians, but increasingly amongst traditional meat-eating individuals who are embracing trends like meatless Mondays and assuming a ‘flexitarian’ (or more part-time vegetarian) approach.”

According to the executive summary of a report, Ready and Prepared Meals, produced by market-research firm Mintel, 86 per cent of Canadians ate one or more frozen RTE meal in the six months leading up to March 2015, and 55 per cent of Canadians said “RTE meals allow them to try different foods and flavours,” with 53 per cent “agreeing that ethnic-inspired RTE meal options are more adventurous.”

Burnaby, B.C.-based Indianlife produces a line of frozen vegetarian or vegan frozen meals that can include chutneys, rice and flatbreads. Options include Banglore Beans – Kidney Bean Curry, and Vegetable Korma with white and wild rice and naan. The newest additions to the entrée line are Shahi Paneer (green peas and cubes of paneer cheese with brown basmati rice) and Palak Paneer (paneer cheese in spinach sauce with basmati white rice). Adding to those are Indianlife’s Masala Wrap with Chickpea & Wild Rice, and Naan Wrap with Kidney Beans & Brown Rice. There’s also Metro supermarket’s Irresistibles Chana Masala. “The vegan and vegetarian categories of our private brands business (Irresistibles and Selection) is definitely growing,” says a Metro spokesman.

Representing Asian influences are frozen meals such as Irresistibles Life Smart Vegetable Chow Mein, and Amy’s Thai Red Curry (with jasmine rice and vegetables) and Pad Thai (rice noodles and tofu). Eastern Europe gets its due with Cheemo potato/Cheddar, potato/mushroom and potato/cream cheese/dill perogies; and, from Ontario-based Sarafina Fine Foods, Cabbage Rolls with Quinoa, and Stuffed Peppers with Quinoa.

And then there’s pizza, an entire category unto itself. The selection is dizzying, ranging from traditional pies and flatbreads to vegan and gluten-free creations. In the former category, options include Stone Baked Mediterranean Flatbread and Stone Baked Pizza (five cheese and tomato/cheese/basil) from Longo’s private label; Whole Foods’ 365 Vegan Pie and Thin-Crust Pizza with Goat Cheese and Pesto; Loblaws PC Thin & Crispy pies (spinach, for example, and in the PC Blue Menu line, spinach with roasted veggies and goat cheese); and from Metro, Life Smart Thin Crust Multigrain with Spinach & Vegetable, and La Pizza Thin Crust Pizza with Raised Edge (Broccoli, Spinach & Kale). Toronto-based Tandoori Oven, which launched its frozen RTE line in October 2015, counts two naan-based pizzas (veggie and cheese, both made with garam masala-spiced tomato sauce) in its repertoire.

Gluten-free pizza options (“gluten-free or wheat-free continues to be a driver in interest across all sub-categories,” says Dennis) run to Duo Cheese, and Spinach & Feta, pies from Glutino. Covering gluten-free, as well as dairy-free, is Daiya, whose line, made with mozzarella-style shreds, is available in varieties like Spinach & Mushroom; Margherita; and Supreme (with onions, red and green peppers and meatless sausage). Sarafina’s gluten-free line includes Spinaci Funghi, on multigrain crust; Quattro Formaggi, on rice crust; and Vegan Pizza, on sweet-potato crust. Sarafina, which launched its gluten-free pizza in 2013, has been growing “on average 60 per cent each year,” said vice-president John Daniele.

Trending, too, are meat-replacement meals, typically made with soy protein. “We’re seeing an overall strong interest in this category, driven by health and environmental concerns, but also encouraged by an increasingly broad selection of innovative products offered by companies like Field Roast, Gardein and Sophie’s Kitchen,” says Dennis. “It’s easier than ever to find convincing meat substitutions, and people are willing to experiment.”

Tofurky, a U.S. brand of turkey replacement made from a blend of wheat protein and organic tofu, numbers Slow Roasted Chick’n (in Thai basil, sesame garlic and barbecue flavours), hot dogs and sausages in its RTE roster.