The future is automated 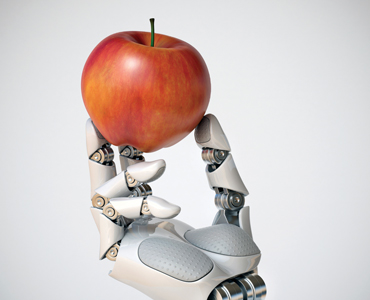 When Flow Water was planning its new 21,000-sq.-ft. plant in Aurora, Ont., the company went all out on automation. The new facility, which opened in May 2017, is home to a state-of-the-art Tetra Pak A3/Flex filling machine that produces 7,200 bottles of Flow spring water an hour. The company also invested in TetraPak’s latest innovation in closure technology — the DreamCap — a screw-top lid made from sugar cane.

“The Tetra Pak machines are extremely automated and robotic,” says Nicholas Reichenbach, CEO and founder of Flow Water. There are only four people working on the line, producing two units per second. “It’s faster than anybody could ever humanly work and the quality output of that is consistently monitored with computers. So our quality levels are extremely high.”

Flow Water originally co-packed its product, but a booming business necessitated having its own facility, according to Reichenbach. “Secondly, we want to be at the forefront of innovation. To continue to advance biodegradable, renewable packaging with [TetraPak], we would have to buy the latest state-of-the-art-machines, so we made that choice.”

Investing in automation is a choice that an increasing number of food and beverage manufacturers are making. “Large companies are going to have various levels of automation in their plants, but small- and medium-size manufacturers are facing the same competitive pressures,” says Mary Burgoon, market development manager at Rockwell Automation in Milwaukee, Wis. “That’s inciting them to look at ways to increase their productivity, reduce their cost and improve their product quality. So they’re driving full speed ahead towards automation.”

One small food company that’s investing in automation is Kitchener, Ont.-based Henry’s Tempeh. Last October, the company moved into a new 2,500-sq.-ft. facility, and with seed funding from Bioenterprise, implemented automation technologies such as packaging and labelling machines. The company is seeing big increases in efficiencies: two people can package a unit in four seconds, down from 15 seconds. Factoring in the labelling, “what used to take us 70 minutes now takes us 18 minutes,” says Jason Jurchuk, one of three co-owners of Henry’s Tempeh.

Automation also helps the company expand while keeping costs reasonable. “I would love to have a staff of 40 people doing

everything manually, but there’s just no way that would work. Our product would be overpriced and nobody would buy it,” says Jurchuk. “We’re trying to offer a good-quality, vegetable-based protein source at an affordable and accessible price, and automation helps us keep our prices lower.”

In the future, Jurchuk thinks there will be a lot more automation in the food sector as a whole. “It’s the key to expansion, both for food quality and consistency, and to be able to meet demand,” he says.

Robotics is another emerging area for the food and beverage sector. According to the Ann Arbor, Mich.-based Association for Advancing Automation, the North American food and consumer goods industries increased orders for robots by 32 per cent in 2016. Robot sales were also up 17 per cent in the first half of 2017 compared to the first half of 2016. Robots in these industries are used in a variety of functions, including improving food safety, and packaging tasks such as tray loading, case packing, bagging and palletizing.

“There is definitely a spike in the sector, but it’s still a relatively small part of the market at only five per cent,” says Bob Doyle, director of Communications at the Association for Advancing Automation. “However, we see it continuing to grow because more and more food and beverage companies are realizing the benefits of automation. [In addition], new technologies are helping to meet and exceed the requirements that are necessary in the food and beverage market.”

As an example, Doyle points to a Boston-based startup called Soft Robotics, which has developed a new class of soft robotic grippers designed for food and beverage manufacturers. The robots can sort and package delicate produce and bakery items, or handle items of varying weight, shape and size, such as dough balls and hamburger patties. “Most grippers are made out of metal or they’re used to grip car parts,” says Doyle. “You don’t want a robot to pick up tomatoes with a metal gripper. It’s just going to destroy them.”

Another newer technology that’s gaining traction is collaborative robots, or “co-bots,” which are designed to work alongside humans. In the past, the robot and the operator had to be separated by a cage because of the risk that the robot could harm the operator, notes Peter Fitzgerald, general manager at robotics company FANUC Canada. The collaborative robots have safety systems and control mechanisms in place so the machines and humans can work together.

“It creates a real shift in how automation is applied,” says Fitzgerald. “It goes to a truly collaborative environment where the operator may do a portion of the work and the robot may do another portion. The operator can make all the decisions as to what needs to get done and the robot can take on all the heavy lifting.”

Dispelling the notion that robots will replace people, Fitzgerald says the technology can allow employees to increase their skills and knowledge, and get redeployed to other positions. “If there is a worker on a line doing a simple task day after day, you can replace that task if it’s suitable for automation,” he says. “That employee can then [learn] how to operate, maintain and apply the automation, which can lead to other productivity gains.”

With an increased need for tech skills, schools like Conestoga College in Kitchener, Ont. are training students on the latest innovations. The college’s Institute of Food Processing Technology has a state-of-the-art food manufacturing pilot plant designed to resemble a real food manufacturing plant. The facility has three complete production lines: bakery, fresh vegetables and beverage. “One area of focus is preparing highly skilled people for the plant floor, anywhere from machine operators to maintenance staff to QA technicians to supervisors,” says Luis Garcia, chair of the Institute of Food Processing Technology.

Another area of focus is applied research, which involves conducting projects with industry partners that want to find a technical solution to a specific problem. The institute works closely with other Conestoga College students in programs such as engineering and robotics. In 2012, students worked with a food company to develop an application for a robot to pick up cupcakes from a mould and place them in a tray. Garcia says students are currently working on a hyper-spectral technology to assess the quality of food products, and recently completed a project on automation for a green bean packing facility.

As factories become more digitized — incorporating “smart” technologies, data and cloud computing — employees are going to need more of a technology background, says Rockwell Automation’s Burgoon. “They may not need to have an engineering degree, but they have to have experience with digital operations, so that’s changing how companies hire.”

The technology is also changing the nature of factory work, allowing employees to be more autonomous and to make decisions that affect production. “Manufacturers are leaning towards the operator to be more in tune with what’s going on on the line and giving them more criteria to work with,” says Mike Mokros, industry manager for Food and Beverage at Rockwell Automation’s Toronto office. “They’re looking for them to provide input and take more actions as the technology allows it.”

While there is a labour shortage in the food and beverage sector, higher-tech positions could potentially help companies attract employees. Burgoon says many companies (including Rockwell) are working to build the STEM workforce of the future by talking about manufacturing programs with elementary and high school students. “The nature of manufacturing is perhaps not what people think it is — that it’s dirty and unsafe,” she says. “This is not your father’s manufacturing facility. It’s a lot sexier than it used to be.”