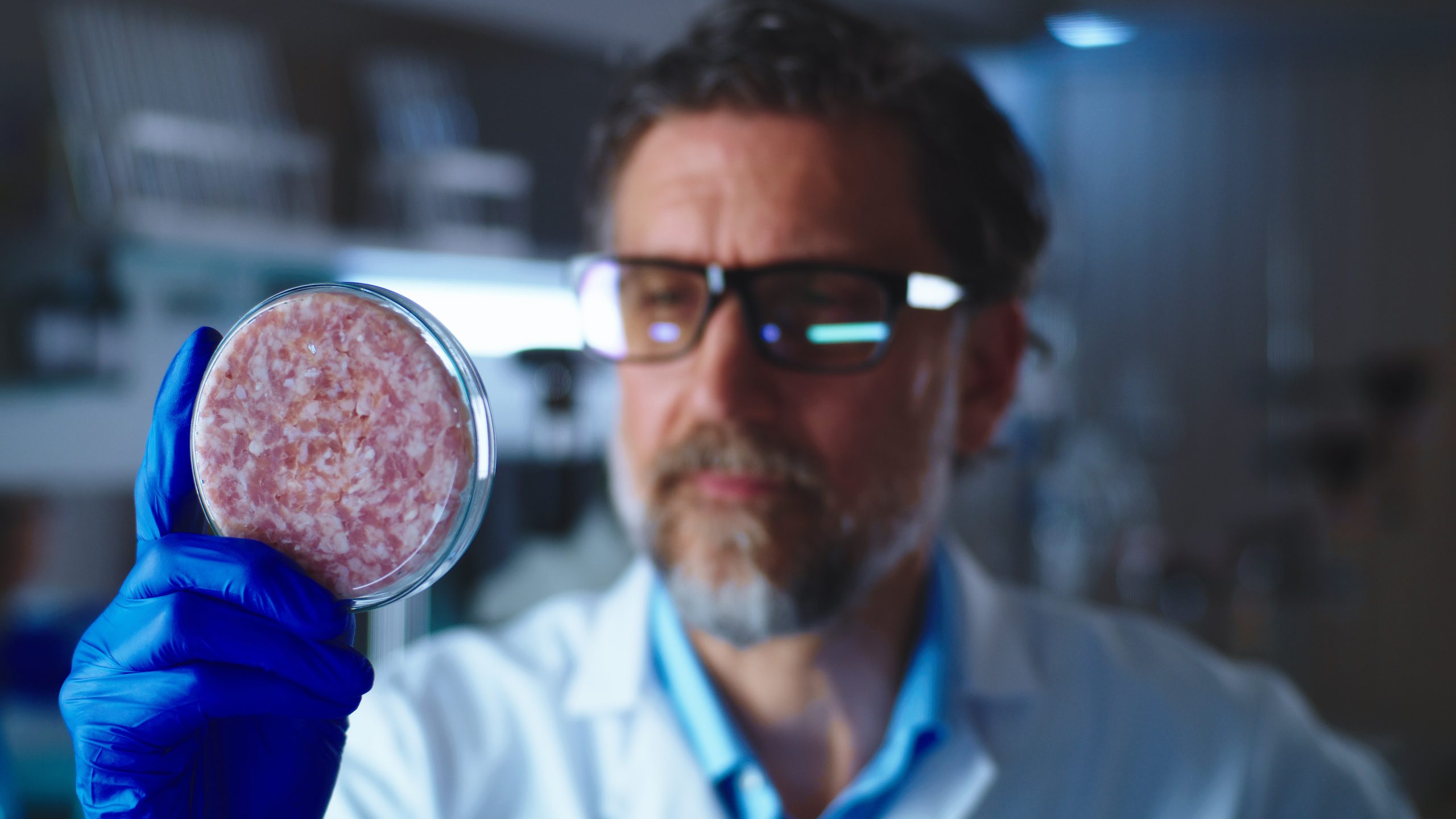 Data gathered on the environmental impacts of food production indicate that beef production has the highest global average of greenhouse gas emissions in the food industry. Despite this, Agriculture Canada’s principal research scientist recently noted how our national beef production system currently enjoys some of the lowest greenhouse gas emissions per kilo of beef in the world, but is this enough for sustainable intensification?

Canadians agree that timely action is needed to advance positive food systems change. Plant-based foods are quickly rising in popularity as a response, but some Canadian companies are seizing the opportunity presented by cellular agriculture, not just for meat, but also for seafood and pet food. As advancements in biotechnology move lab-grown meat closer to restaurants and store shelves, consumers have much to look forward to from these protein options.

What is lab-grown meat?

Cell-based meat (also known as lab-grown meat, cultured meat, and synthetic meat) refers to a process of in-vitro cultivation of animal cells as an alternative to sourcing meat directly from slaughtered animals. It works by taking stem cells from donor animals, which are then immersed in a growth serum. The cells are then placed inside a bioreactor, where they grow in optimal conditions to convert themselves into edible meat. This tissue engineering technology can be safely categorized as a form of cellular agriculture.

There are a number of things to be excited about. Most obvious is the way cellular agriculture can avoid the cruelty animals endure in industrialized agriculture and slaughter. However, the benefits go far beyond moral obligation: the huge global population pressurizes the demand for meat products around the world, posing a problem for the supply chain. For example, consider the huge amount of land dedicated to raising the processing livestock; experts found that cultured meat leads to 99 per cent less land use. Consider also the extreme weather events caused by the climate crisis, like the flooding in British Columbia this winter, which exacerbate these pressures considerably. On top of that, conventional meat production processes are a significant source of greenhouse gas emissions and waste.

At the same time, lab-grown meat is a very recent invention: the first-ever cultured meat burger patty directly grown from cells was produced by Mark Post, professor at Maastricht University, in 2013. There are still significant barriers to this biotechnology at the present stage, such as high costs (Memphis Meats reports that every pound of lab-grown beef costs approximately $2,400), production time, process optimization (from questions around the best growth medium to addressing the current absence of blood vessels), and cultural/social acceptance and preconceptions.

Recent indications suggest that the technology will overcome these challenges as a lower-impact and more affordable solution to producing enough meat to feed the world. Some experts posit that cultured meat products will be cost competitive with traditional meat products within the decade. Funding has begun to flow for research and development (including new research institutes in India and USA) and into startups from the Netherlands to Israel and beyond.

Unlike most food products, the regulatory landscape for cultured meat is still not clear. Since cell-based products are manufactured by a process that has not been previously used for meat or seafood, we do know that the first Canadian producers will have to obtain pre-market approval from Health Canada as a novel food product. The European Union has already clarified that cultured meat products must also comply with the general requirements and principles of food law. Around the same time, the US FDA and USDA announced that they will collaborate in regulating the newly emerging sector, showing how future products will likely straddle multiple regulatory frameworks. We can guess, then, that lab-grown meat products will still be considered meat to some degree and subject to the same controls as traditional manufacturing methods.

Though meat and poultry are considered high risk products, food-borne illness outbreaks are rare because the industry is generally well controlled. Traditional meat producers, as well as their secondary processors, are aggressively audited and inspected due to the extensive number of potential hazards that must be controlled through raising the animals, slaughter, and processing.

Many of the hazards associated with meat production are related to the animals themselves and the wide range of cross-contamination points to monitor, control, verify and record in farms and processing facilities. The Centers for Disease Control (CDC) notes that contamination can occur at any point during production, processing, distribution, or preparation.

A significant number of these hazards would no longer apply when meat is grown in a lab-based environment. For example, the risk of bacterial contamination from food found in the digestive tract of animals brought to slaughter would be completely eliminated. Without animals grazing in a field, there is no possibility of exposure to pesticides. Without exposure to bacteria, there is no need for antibiotics.

The window for risk is also narrowed since cellular agriculture is comparatively faster, translating into less labour, waste, and time for hazards to be introduced, and requires considerably less equipment overall, further reducing potential for contamination. Instead, lab-grown meat producers can exercise very tight control over genetic stock used to seed the bioreactor, allowing them to screen out cancers, genetic diseases, and more.

However, along with the benefits of a laboratory environment over farms, there are also risks. We can expect that there is still the potential for contamination by cleaners, sanitizers, and lubricants needed for processing equipment. Bioreactors operate in an environment containing water, blood, and other materials in which bacteria thrives. There would still be a risk of pathogen growth associated with exceeded time or temperature thresholds, which must be constantly monitored by automation technology and standardized lab testing to ensure safety and quality.

The future of cell-based meat

Overall, it does seem likely that lab-grown meat production will be comparatively safer than the norm today. Cell-based meat products also have the potential to be of higher quality (due to tightly controlled genetic stock) and more nutritious, sustainable, and compassionate.

With the recent launch of the Canadian Food Innovation Network and Ontario Genomics’ Accellerate-ON co-funding competition, we can look forward to seeing more innovations in cellular agriculture closer to home. For these emerging leaders in cellular agriculture, creating a culture around food safety and operational excellence will be essential to earn the trust of consumers. Food companies that maintain the highest standards to maximize efficiency while prioritizing safety and quality finished product will stand out and succeed.