The facts on wheatgrass

Wheatgrass has a lot of healthy attributes, but the research still isn’t there to back it up 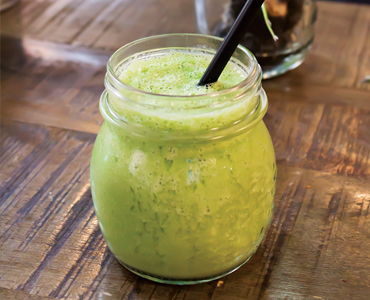 If you search up information on wheatgrass, you’ll either be impressed by it, suspicious of it, or both. There’s an abundance of information out there, touting wheatgrass as a superfood, as a “nectar of the gods,” and as a cure-all of a multitude of ailments.

But it’s not clear from a quick Google search how many of the claims are anecdotal or how many have been proven with scientific research. A lot of the research to date, says Jane Dummer, a Kitchener, Ont.-based registered dietitian and president of Jane Dummer Consulting, is based on rodent and not human trials. But stop in at any juice bar, and wheatgrass will be on the menu.

A bit of history
Wheatgrass goes back thousands of years. Some reports say the ancient Egyptians prized it for what they believed were positive effects on their vitality and health. In the 1930s an agricultural chemist, Charles Schnabel, began documenting the nutrition in wheatgrass. But, says Dummer, it still mostly fell under folklore-type medicine “and hasn’t received the attention of big clinical trials.”

In the 1970s Ann Wigmore of Boston, Mass. made the wheatgrass diet popular. She believed strongly that wheatgrass could cure disease. According to the American Cancer Society, the Massachusetts Attorney General sued Wigmore twice – in 1982 and again in 1988 – for making non-substantiated claims about wheatgrass. In 1982, she said wheatgrass could reduce the need for insulin and in 1988 she said that a wheatgrass-based soup she created could cure AIDS. She was ordered to stop representing herself as a physician.

What are the benefits?
Wheatgrass are the young shoots of the wheat plant, says Laura Iamundo, a nutritionist and customer service representative at Toronto-based natural foods market The Big Carrot. Both wheat and wheatgrass come from the same plant – Triticum aestivum. “Wheat generally refers to the grain, which is what’s used to make flour, while wheatgrass refers to the young grass that grows before the grain is produced,” she says.

Wheatgrass contains vitamin A, E, B12, calcium, selenium, magnesium, iron and 17 amino acids – the building blocks of protein, says Iamundo. It also has vitamin C, and chlorophyll (what gives it the green colour), which contains enzymes and energy. Iamundo adds that while there is no scientific evidence to back this up, anecdotally wheatgrass has been known to help “people with ulcerative colitis and digestion issues. Anything green contains fibre and helps with regularity, too.”

Dummer also notes that alternative medicine practitioners have been saying that chlorophyll “mimics the action of hemoglobin in your blood so it does help to give you more oxygen and that can give you more energy.”

Generally, says the Mayo Clinic, advocates say wheatgrass can boost your immune system, kill harmful bacteria in your digestive system and rid your body of waste. While some advocates say it can treat cancer, anemia, diabetes, constipation, infections, skin conditions, ulcerative colitis and joint pain, “there are few research studies about wheatgrass so it’s difficult to assess such health claims.”

Can you formulate with it?
The Mayo Clinic says wheatgrass is mostly sold as a dietary supplement in tablet, capsule and liquid form. And Iamundo adds that it’s more often consumed raw, in juices or salads. The Big Carrot sells wheat berries, which can be sprouted at home into wheatgrass, wheatgrass that is already growing, and cut wheatgrass. Wheatgrass can also come in powder form she says, which can then be added to smoothies or baked goods. But, she notes, “the best way to get the most nutrients, so that it’s beneficial, is to consume it raw.” Dummer also adds that real devotees of wheatgrass “only have it raw; it’s never to be cooked.” It’s difficult to say, she says, what would happen if it’s added to foods and then heated at a high temperature.

Related
Nutrition Facts Education Campaign to help consumers choose healthier foods
American consumers are steering clear of peanuts but how clear are they on the facts?