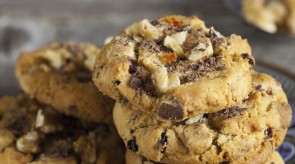 A mix of nuts, seeds and dried fruit has long been many a hiker’s go-to snack. Trail mix punches above its weight, providing sustained energy in healthy fats, protein, fibre, vitamins and minerals. But this portable snack appeals to more than just mountain climbers.

Nuts and seeds are popular snacks internationally. According to the market research firm Innova Market Insights, nuts and seeds accounted for more than 37 per cent of global snack food product launches in 2013, with savoury/salty snacks accounting for the rest.

A key driver in its popularity is health. Media coverage of research indicating that the frequent consumption of nuts and seeds has a positive effect on health overall, and on some chronic conditions in particular, account for the greater interest. In addition, nuts and seeds are now included as a food group in some guidelines for healthy eating, including the DASH (Dietary Approaches to Stop Hypertension) diet. And Innova reports that the interest in the health attributes of nuts resulted in one-third of global launches in 2013 being positioned on a health platform of some kind.

This greater consumer interest has led product developers to capitalize on the versatility of nuts and seeds, creating innovation opportunities like never before.

Though nuts and seeds have been a part of the human diet since pre-agricultural times, nuts and seeds are gaining a reputation as a healthy snack due to the fact that they are high in good fats, and are a source of protein.

Health claims can go a long way in communicatingthe benefits. When, in 2003, the U.S. Food and Drug Administration approved the qualified health claim that eating 1.5 oz per day of most nuts, such as peanuts, almonds, pistachios, pecans, walnuts and hazelnuts (filberts), may reduce the risk of coronary heart disease, consumption levels increased. For instance, the Almond Board of California reports that per capita consumption of California Almonds has more than doubled in the past 10 years and “now ranks as the top nut consumers associate with snacking,” says Molly Spence, regional director of North America.

In Canada, we may see further development and demand for products containing flax seed now that Health Canada has approved the health claim linking consumption of ground whole flaxseed to lowering cholesterol. Kelley Fitzpatrick, director of health and nutrition at the Flax Council of Canada, says Canadians have long-known that flax seed is healthy, but with the health claim it “identifies to health professionals, to consumers, and to the food industry that all this science we have for flax is absolutely recognized as really good science.”

Nuts and seeds are exceedingly versatile in product formulation. Almonds, for instance, can take on 15 different forms, from being left whole to halved, ground, slivered, chopped, sliced, flaked, blanched and diced. They can be processed to make flour, meal, oil, butter, paste or milk. They can even be soaked and sprouted!

San Francisco-based Living Intentions creates eight product lines based entirely on raw soaked and sprouted nuts and seeds. Founder and CEO Joshua McHugh is quoted as saying that soaking and sprouting nuts and seeds minimizes or eliminates numerous enzyme inhibitors which are indigestible and can block nutrient absorption. “By soaking and sprouting, we are releasing the enzyme inhibitors, creating live enzymes and bringing that nut or seed to life.” The products created by Living Intentions include cereal, trail mix, flours, and snacks called Gone Nuts!

Retaining active enzymes and vital nutrients is also the philosophy behind Hippie Cookies, produced by Burnaby. B.C.’s Left Coast Naturals. Instead of flour, eggs and butter, the company’s cookies are made from raw nuts that are put into a food dehydrator for 10 to 36 hours instead of being baked in a conventional oven.

Johanna Israel-Duprey, director of Marketing at Left Coast Naturals, says Hippie Cookies have been well received, as have their award-winning Hippie Snacks Coconut Chips. The chips are not deep-fried, instead the slices of coconut are put into a vacuum-fryer so that the pressure and heat cooks the chips without the use of additional oil. The Coconut Chips were recognized by the BC Food Processors Association with a Product of the Year Bronze award in June.

Sometimes lingering misconceptions prevent innovation. Manitoba Harvest Hemp Foods’ Kelly Saunderson says a stigma around hemp seed has limited consumers and food professionals from experimenting with hemp, “marijuana’s cousin.” But through advocacy and education, fewer people are asking if hemp and marijuana are the same — they’re not — and more likely to want to know its nutrition profile and how to use it, she says.

Chia and quinoa seeds have made appearances in cereals, snacks and beverage categories and their popularity has only really begun. Reports from foodnavigator-usa.com indicate the chia category has already grown by 239 per cent over the course of a year and is expected to be a $1.1-billion category by 2020.

Rally Ralston, managing partner of Salba Smart Natural Products, LLC, says manufacturers are only starting to understand how chia can contribute to their nutritional panels. “Chia on a gram-for-gram basis is one of the most nutrient dense seeds on the planet,” he says. Salba is a standardized nutritionally consistent crop with health and medical claims whereas common chia is not.

Another tiny seed is about to make a big impact. Perilla seeds of the Asian Shiso plant are tiny nutrition powerhouses with reports of a better taste profile and an astonishing ratio of omega-3 to omega-6 fatty acids (six to one). Florida-based Valensa International has developed a new range of perilla-based products in response to growing interest in plant-based omega-3s.

Finally, millet is not just for the birds anymore, even though it is often considered a main ingredient in bird seed. Top trends in food, nutrition and health identified by New Nutrition Business cite product developers looking at millet in creating products delivering “slow release” or sustained energy.