Sustainable shrimp on a commercial scale

Canadians have a big appetite for shrimp, but satisfying this appetite can have a significant environmental cost.

The most recent data from Statistics Canada states that Canada imported just shy of 56 million kilograms of shrimp in 2017. According to Ocean Wise — a Vancouver-based seafood program that provides science-based recommendations on sustainable, ocean-friendly buying decisions to restaurants, markets, foodservice and suppliers — the majority of this imported shrimp is farmed or harvested in Asian countries where there is little respect for environmental protection or consumer health. According to Ocean Wise, since 2012, farmed shrimp production has nearly doubled in Asia, and has resulted in the degradation of one-fifth of the area’s mangrove forests, and regulations on the use of antibiotics, pesticides and other chemicals are weak or largely ignored. Harvesting shrimp from the ocean is often done using dragging nets, which not only harms natural habitats but results in the death of other species, including endangered sea turtles.

Although Canada is home to several sustainable shrimp fisheries in Nova Scotia and British Columbia, they are seasonal and consequently can’t meet consumer demand year-round.

However, one company in Ontario says they have found a solution to the challenge of importing shrimp.

Nestled within a former tobacco warehouse in Aylmer, located in Southwestern Ontario, is Planet Shrimp, an inland shrimp aquaculture company that prides itself on producing clean, healthy shrimp with no impact on the environment.

Growing shrimp indoors in closed-containment (inland) systems allow control of the environment in which shrimp are raised, removing the issues that plague outdoor farmed shrimp operations. Although still a relatively new concept in Canada, closed-containment shrimp aquaculture has been practiced in the United States for nearly 50 years. Planet Shrimp co-founder Marvyn Budd saw potential in growing shrimp inland in Canada, and was introduced to experts from Texas A&M University. The idea really got off the ground with the help of investors and Planet Shrimp chief technology officer Doug Ernst PhD, who is an engineer with an extensive background in shrimp aquaculture in the U.S.

In addition to being only one of three operational shrimp aquaculture facilities in Canada, what makes Planet Shrimp unique is its efficiency.

Planet Shrimp chief executive officer and chief financial officer, Sheldon Garfinkle, told Food in Canada that the company is as much a technology company as it is a shrimp production company.

“We’ve brought the concept of production flow to shrimp farming,” he said. Under the company’s model, they are able to harvest shrimp every 28 days, or roughly 13 times per year, which is more frequent than that what is achieved per year by other shrimp aquaculture operations in North America.

This “model” is the result of skillful planning by a team of aquaculture specialists, engineers, IT and business professionals as well as a proprietary farm management software program that collects over a million data points each day on things such as shrimp weight, water composition, feed dispersion, and oxygen delivery.

Such robust data collection “has helped us to optimize production,” said Garfinkle. He said Planet Shrimp built its first prototype in 2015 and produced its first harvest of shrimp in February of 2018. Garfinkle said the company expects to produce 300,000 pounds of shrimp this year, with plans to expand in the coming years.

“We recirculate ten million gallons of water each and every day,” he said, noting that the facility has 120 tanks with a capacity of 740,000 gallons. Water quality is carefully monitored and such a high level of circulation means that no chemical inputs are necessary, said Garfinkle.

Waste is extracted from the water and pressed into a cake-like product that is a high-value byproduct sold to local farmers who “love its high nitrate content,” he said.

Garfinkle said that in taste testing chefs commented on the “sweet” taste of their product, which he attributes to the low salt content of the water. He said chefs have noted that the shrimp don’t smell strongly as other shrimp and the smell doesn’t get on your hands. “The only thing we add to the water is salt, which is low, resulting in one-third the level of salt found naturally in ocean water.”

Because the water is constantly re-circulated, Garfinkle said the company doesn’t need to discharge water to the township, and takes only a negligible amount, the result of any evaporation.

In addition to clean water, the area housing the tanks is also very biosecure, a “building within a building.” The company’s location, an old tobacco storage warehouse built by Imperial Tobacco and abandoned when that company moved production to the U.S. over 10 years ago “is ideal,” said Garfinkle, because of its 25-foot ceilings which allows for the vertical tank set-up as well as containing the tanks within washable, vinyl walls to help prevent pathogens entering the tank area. Like many farming operations, employees are required to follow strict biosecurity protocols, including the use of footbaths and dedicated footwear.

Currently, shrimp stock (Pacific white shrimp fry) and feed is purchased from the U.S. and specified as pathogen-free. Garfinkle said that Planet Shrimp has formed a strategic alliance with the hatchery and feed company and is using its software program to help those companies better understand how its genetics and feed perform under certain conditions, and Planet Shrimp’s long-term vision is to build its own hatchery for breeding stock as a result of this alliance. “This is another level of opportunity for us,” said Garfinkle. 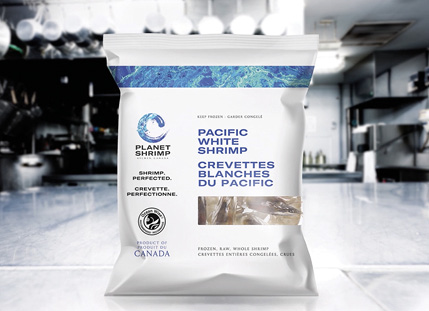 Processing the shrimp is done on-site in a CFIA-approved facility. The shrimp, once removed from the tanks, gently enter a conveyor belt where they are quickly chilled by spraying ice-cold water on them, which kills them. The shrimp are then sorted by size (based on weight), flash-frozen, inspected by X-ray and packed into one-pound bags. The total time a shrimp spends on the belt from the time it leaves the tank until it’s packed is less than five minutes, said Garfinkle. This freshness, in addition to being a clean, sustainable product is “what makes our product so popular with chefs,” he said.

Planet Shrimp has been awarded for its innovative rearing methods and sustainability by several organizations, such as Restaurants Canada and Community Futures Elgin, and has certifications from Ocean Wise and Foodland Ontario. Their product has end-to-end traceability, from the fry to the finished package, which is barcoded.

Currently, Planet Shrimp products are distributed by Gordon FoodService and Export Packers in Ontario and Quebec, but they are looking at expanding into Western Canada. They are also available in select retailers, and in mid-April Planet Shrimp made their product available at their facility for purchase for consumers living in the Aylmer, Ont. area. Garfinkle said that chefs in New York City have inquired about the product, and companies from Japan and the Middle East are interested in their shrimp-rearing technology.

The long-term vision, said Garfinkle, is to expand their own production and help other countries and companies achieve the same type of production using their farm management software. “We get calls all the time from other countries looking to replicate what we’ve done in their own country,” said Garfinkle. “We envision that we will be able to operate our systems for ourselves here in Aylmer, as well as monitor the system of a group in London, England, for example.”

“From our perspective, we see this [indoor shrimp farming] as the future. That’s why for us, the technology aspect is important because it enables us to work closely with other players and to scale the business and grow it. We have that ability,” he said.