Heat and spice isn’t for everyone, but there are enough fans – and growing – to keep the market smokin’ hot 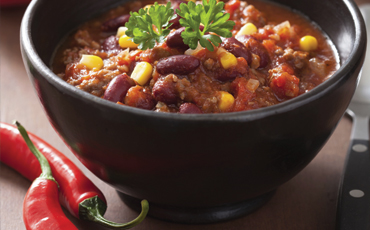 Heat and spice isn’t for everyone, but there are enough fans – and growing – to keep the market smokin’ hot

The hottest pepper in the world, according to Guinness World Records, is the Carolina Reaper, which took its creator Ed Currie almost 14 years to get to market. Currie is the founder and president of Pucker Butt Pepper Company in Fort Mill, S.C.

While Currie is not a scientist, he has a passion for peppers and heat. He believes the capsaicinoids (found in

capsaicin, the chemical responsible for the heat) have huge health benefits. In fact, when he started work on the Carolina Reaper, he wasn’t intending to make it the hottest; his plan was to make a more healthful pepper.

According to Currie, consumers are drawn to heat because of foods they’ve tried while travelling, or through exposure to ethnic foods with heat at restaurants. What brings consumers back to the heat is the endorphins. As Currie explains, “your body releases endorphins to overcome the chemical reaction that’s happening on the tongue that causes pain. The endorphins give you a rush. It’s a pleasurable experience.”

Danise Coon, a research technician for the Chile Pepper Institute (CPI) at New Mexico State University, says one green pepper (whether it’s hot or not) has as much vitamin C as six oranges. One teaspoon of red chili powder has the recommended daily requirement of vitamin A. And capsaicin can help speed up metabolism. In general peppers have a good amount of fibre. Some reports even say chili peppers can both whet and curb your appetite.

In 1912 Wilbur Scoville, an American pharmacist, created the Scoville Organoleptic test, which is now called the Scoville Heat Scale, says Coon. It’s the most accurate way to test the heat of chili peppers. Today scientists use HPLC (high performance liquid chromatography) to count the capsaicinoids and then convert that to Scoville Heat Units (SHUs). On the scale, the Jalapeño comes in at between 1,000 and 4,000 SHUs, while the Carolina Reaper has averaged up to 2.2 million SHUs. Pepper spray can come in at between two to 5.3 million SHUs.

Anil Crasto, a sales manager for Core Compounds in Oakville, Ont., says formulating with hot peppers is – like anything else – difficult “if you don’t know how.” It also depends on whether food manufacturers want to use extracts or fresh peppers.

If food manufacturers want to add heat and ensure that it’s consistent in each batch, they can use oleoresin capsicums (extracts from red hot chilis). These extracts can come in different SHUs, from half a million to one to two million or higher. The lower grades are used in product formulation. “The biggest advantage [of the oleoresin capsicums],” says Crasto, “is that the product is standardized.”

Oleoresin capsicums are oil soluble, meaning that to use in certain products they must be made water dispersible, says Crasto. Typically, manufacturers would have to emulsify the oleoresin capsicum in some type of emulsifier system to make it easier to use in a water system.

Using fresh ground peppers is a little trickier. The issue, says Crasto, “is they’re a raw agricultural product. Depending on where they’re grown, the year in which they were grown, it’s likely the heat level will vary from batch to batch.” Manufacturers can also grind the peppers to add them to food products, but they must assess the heat and how it stabilizes. One advantage to using fresh ground peppers is that they do add a more unique, rounder flavour profile. This can be especially key for strong barbecue sauces or curry sauces. Crasto notes that food manufacturers can also combine fresh peppers and the oleoresin capsicums.