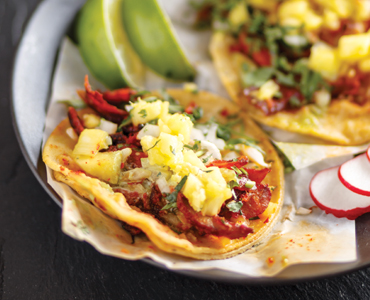 While street food has been around for centuries, its popularity is exploding around the world. In North America, the food truck movement is going strong and consumers are hitting the streets for globally inspired, handheld eats.

“Consumers are using the platform of street food or food trucks to explore and become familiar with new, mostly ethnic-inspired flavours,” says Juriaan Snellen, executive corporate chef at McCormick Canada. “And it’s a low-cost risk they’re taking. On average, an ethnic hand-held item is going to set you back $10 to $12, which is a small price to pay for something you might not be as familiar with. So, it’s a great way to try new and different flavours.”

“Street food is a conduit to experience other cultures, and when you say something is ethnic-inspired, it gives it a sense of

“As the street food phenomenon continues to grow, it’s actually morphing into more of an ethnic fusion blend of different types of flavours,” says Snellen. “People are using familiar carriers and stuffing them with unfamiliar [ingredients]. Or vice versa, they’re using unique carriers but filling them with more familiar flavours. It’s a balance between bringing something unique to the table, but with a familiar twist so that consumers can still relate to it.”

Aside from consumers’ hunger for new flavours, street food is taking off because of today’s busy lifestyles. “[Food] has to be portable so people can consume it on the go,” says Snellen. “In addition, there’s a lot of snacking that’s happening and people are having smaller bites and smaller meals throughout the day.”

Last year, Bento Sushi jumped on the hand-held trend with the launch of three varieties of sushi burritos, which are essentially giant sushi rolls. Each variety contains a different version of Hawaiian poké (such as the Big Katuna Burrito with tuna, mango, sesame seeds and teriyaki sauce), wrapped in sushi rice and nori.

John Hashimoto, director of product development at Bento Sushi, says his company is always looking for what inspires people to try new things. “When it comes to food, a lot of times it’s about bringing different cultures and new experiences to the customers. And the whole street food scene is definitely on trend right now,” he says. “People are realizing that you don’t have to have a fanciful dining experience and white linens to have really good food. You can have it on the street.”

Bento Sushi’s sushi burritos initially launched at major grocery chains across the country, but are now largely sold at universities. “It’s resonating more with younger consumers, who are all about new experiences in life and food,” says Hashimoto.

“Some of the leading flavours in North America today are the spicier, bolder flavours that come from international markets, and that’s where street food excels,” says Michael Delli Colli, retail brand manager at Expresco Foods. “The [ProSticks] flavours are on trend, but the product is also convenient and easy to eat. You don’t necessarily need a knife and fork…It’s something people can just grab and go.”

How else can the street food trend translate to CPG brands? Mintel’s Gregoire says one opportunity for food manufacturers could be in the snack category, as snacking occasions continue to rise. He points to Pringles, which launched a limited-time “Street Food Edition” in the U.K. last summer. The line came in four flavours: Spicy BBQ, Hot Chili Sauce, Mac & Cheese, and Thai Green Curry.

“The one ‘watch it,’ though, when you consider a product like that, is the fear of diluting the authenticity of the food,” says Gregoire. “If you say these chips taste like street food, are consumers really getting that street food experience? So that would be my caution for CPG manufacturers in different spaces.”

McCormick’s Snellen agrees that HMR sections are a good way for food manufacturers and grocers to capitalize on the street food trend. “It’s the perfect platform to feature these types of hand-held items,” he says. “We tend to say that our flavour forecast predicts two to three years out…So I definitely foresee an increase in more ethnic-inspired street foods [across categories].”

Food trucks are on a roll

In Toronto, one food truck that’s mixing it up is The Kathi Roll Express, which specializes in Indian fusion street food. The menu includes Indian Fusion Burritos such as the Butter Chicken Burrito and Piri Piri Chicken Burrito, as well as a variety of Indian Tacos. On the gourmet front, Montreal’s Mobile Europea, from Europea restaurant’s chef-owner Jérôme Ferrer, serves up French bistro dishes such as shrimp risotto and poutine with mushrooms and foie gras at pop-up events and on the streets.

According to IBISWorld, the Canadian “street vendors” industry has been one of the best-performing industries in the foodservice sector during the past five years, with 2017 revenue forecasted to reach $305 million, growing at an annualized 2.9 per cent over the five years to 2017. An IBISWorld Report states: “Entrepreneurial food truck operators have entered the industry to cater to changing consumer preferences that favour gourmet offerings and unique food concepts. As a result of Canada’s gastronomic explosion, traditional street foods, such as hot dogs and poutine, have given way to a diverse range of gourmet street cuisine.”