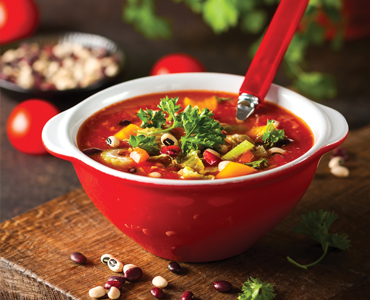 As comfort foods go, soup, especially in the cold-weather months, has few rivals. A piping hot bowl of soup seems to cosset the soul even as it nourishes the body. These days, Canadian consumers are taking comfort in healthier soups made with wholesome, locally sourced ingredients that deliver big on taste.

In 2016, retail value sales of soup in Canada declined by one per cent to $695 million, and the category declined by one per cent in volume terms, according to Euromonitor International’s Soup in Canada report. The report notes that negative consumer perceptions about canned soups (the largest category) being of lower quality and/or too “processed” are hurting sales; however, soups such as chilled and organic varieties, perceived as fresher, have performed well.

Chicken noodle remains the most popular flavour due to its familiarity and perceived benefits as a remedy for colds and flu. Cream of mushroom and tomato follow, according to Euromonitor International’s report.

This holds true at Campbell Company of Canada, where Classic Chicken Noodle, Cream of Mushroom and Tomato remain the most popular varieties, according to Melissa Mendoza, director of Marketing, Soup. “Consumers want their food to be made with recognizable, desirable ingredients” and are “looking for the absence of negative ingredients,” notes Mendoza. All of Campbell’s soups are made without artificial colours or flavours, and almost 70 per cent of Campbell Canada’s vegetable ingredients (by weight) are sourced from farms located within three hours of the company’s Toronto manufacturing plant.

Mendoza says there is a general movement towards health and wellness, and “while consumers are concerned about the level of sodium and sugar intake, they are also concerned about the presence of positives like whole grains and vegetables.” Last year, Campbell’s introduced No Salt Added Cream of Mushroom and No Salt Added Cream of Chicken, condensed soups in popular flavours that consumers can season to their tastes.

Organic soup, “while still a relatively small segment, is also growing, given the heightened, socially conscious movements and

the rise in health and wellness with consumers,” says Mendoza.

Global flavours are also resonating. Tapping into the Asian food trend and the growth in popularity of Vietnamese pho soup, Campbell’s introduced Pho Broth. In addition, Mendoza notes that bacon has “risen as a cultural staple” in recent years and penetrated foodie culture. To meet this demand Campbell introduced Condensed Cream of Bacon that consumers can incorporate into recipes such as mac ’n’ cheese.

At Burnaby, B.C.-based Happy Planet Foods, Inc., “we are seeing growth across many flavours from all corners of the world,” says Kyle Marancos, senior Marketing manager. Popular varieties include Thai Coconut, Tuscan Tomato and Berkeley Butternut. Happy Planet sells chilled soups in organic, gluten-free, dairy-free, vegetarian and vegan options, all made in small-kettle batches and sold in flexible packs.

Consumers, says Marancos, want products made with fresh, premium, natural and certified organic ingredients — “we are seeing strong performance on our organic soups” — and prefer products free of preservatives, artificial ingredients, colourings “or anything that you can’t pronounce.”

Healthy products made with wholesome ingredients is the mission statement of Canada’s Own, which debuted its soups in 2010, enlisting celebrated Canadian chefs Jamie Kennedy and Rob Feenie to create the company’s lineup. Made from ingredients minimally processed and sourced from family farms, its soups are low in sodium and free of dairy, preservatives and artificial colours, and are sold chilled, in pouches.

Producing its soups at a Mississauga, Ont. plant, the company sources “99 per cent” of its products from Canada, with almost all ingredients sourced from Ontario, says founder and president Carole-Ann Hayes. Chicken Noodle is the best seller, and there’s a four-way tie for second best seller — Butternut Squash, Tomato Basil, Kale Vegetable Barley and Red Lentil Dal. “These days, more people travel, and like global experiences,” notes Hayes.

Augmenting the company’s soup lineup are Vegetable Stock and Chicken Stock. “Stocks are a growing, health-based market,” explains Hayes. “Serious home cooks are buying stocks. Sales of our chicken stock spike at holiday times, which makes sense, with all the cooking and entertaining people do during the holidays.”

According to Aashwin Jeyakumar, general manager at RaviSoups, “Customers are looking for something healthy and comforting, and they’re looking for spice and adventure.” The company operates six Toronto restaurants and one food truck, selling soups, sandwiches and wraps. At the top of RaviSoups’ hit parade are Chicken Hot Broth, flavoured with coconut milk, lemongrass and Thai basil (“during the winter, it keeps you going if you have a cold,” notes Jeyakumar), and Corn Chowder, featuring blue crab and Thai spicing.

At Nature’s Emporium, a health food market operating three locations — Vaughan, Newmarket and Burlington, Ont. — “our customers are asking for soups that fit in with the season” says Ryan Dennis, director of Communications. “In summer, they’re looking for light, rainbow-coloured garden vegetable soups made with fresh local produce,” he explains. “In the winter, they’re looking for warming, hearty and wholesome soups, like a rich, spicy organic tomato or a spicy organic Thai pumpkin soup, which provide a little extra energy, helped out with a spice kick for much needed heat.”

At each Nature’s Emporium location a dedicated fresh food team, including an onsite chef, prepares the soups sold at in-store hot tables and soup-and-salad bars. The Newmarket location also makes a line of to-go chilled soups sold at all three stores in one-litre mason jars. “For our customers, it’s all about local. No matter the ingredient, they’re looking to have it sourced as close to home as possible,” says Dennis. “This includes meats — which we source from local producers — vegetables and spices.”

Also trending is a “desire for homemade, wholesome and real ingredients,” says Dennis, adding “our customers are asking for globally inspired.” Nature’s Emporium meets this demand “by anchoring these ingredients with a broad mix of global flavours, be they Eastern European, South American, South African, East Asian or anywhere in between.” All of the company’s soups are “on the low end of the sodium spectrum.”

Dennis notes that Nature’s Emporium’s customers, who hail from a diverse range of backgrounds and demographic groups, have hugely varied preferences, something that reflects the larger soup market. “Some want high fat, such as the Paleo (Diet) crowd, some want low fat, some want gluten free, some want dairy free, some want high protein, others want low protein,” says Dennis. “And some either want all of these in vegan format or traditional meat format.”