Alcohol and spirits are increasingly being used to flavour food products in creative ways, and the trend is showing no signs of slowing down 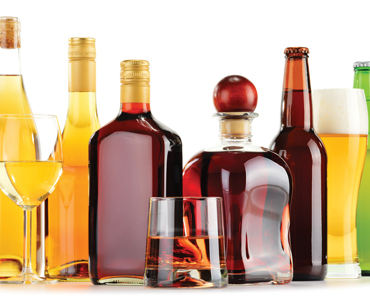 As any stalwart fans of cooking legend Julia Child would know, using wine as an ingredient in French cuisine has always been a

standard. And adding beer as an ingredient in soups, stews and batters is certainly nothing new in the culinary world. Now we’re seeing a broader range of alcohol flavourings and spirits being used innovatively as an ingredient in recipes and food products across North America.

“The trend of adding spirits to recipes is driven by the popularity today of craft cocktails and interest in bourbon,” says Garth Vdoviak, Product Development manager for Mizkan Americas. “Wine, and to some extent beer, has been used in cooking almost as long as it’s been consumed to mellow, deglaze, braise or finish a dish. Today’s rise of spirits in formulations stems from relaxing the hard and fast rules while still following traditional pairing of food and spirits.”

Overall, spirits can be a powerful flavour addition to rich sauces, dishes and desserts, says Vdoviak. “Lighter spirits, such as moonshine or tequila, pair well with lighter foods such as seafood and chicken. Darker spirits like bourbon and rum can really enhance the flavors of dark meats including beef, lamb or game,” he explains. “For desserts, bourbon, dark rum and brandy pair well with vanilla and maple flavours to make decadent sweets including Maple Bourbon Frosting.”

Tricks to keep in mind

For food manufacturers who want to add spirits and alcohol as flavourings, the process can be a bit of a balancing act. “Manufacturers can use spirits to complement and enhance the formulation of a product, yet not overwhelm the final product,” says Vdoviak. “If the final product has a spirit in it, the consumer expects to taste that spirit. The percentage of alcohol that food processors use when producing foods made with alcohol can vary between five per cent and 20 per cent, and manufacturers should be cautious to heat the spirits enough to remove the alcohol, but not the flavour of the spirit.”

Depending on cooking methods and heat exchange systems, manufacturers can decide whether to add the spirit at the beginning, middle or end of the cooking process, says Sackett. “Formulators are mimicking what is happening in restaurants around the country, using spirits in traditional cooking methods, such as brining, braising, reducing, curing, glazing and in batter applications,” he explains. “When producing large-scale food products, manufacturers should use an industrial spirit designed for large-scale production or otherwise risk the flavour profile of their product varying year to year.”

While bourbon and vodka are both among the “rising stars” in alcohol and spirit flavourings for food, they’re definitely not the only game in town. Mizkan sells a whole line of denatured spirits, for instance, and two new recent introductions to its line are Moonshine and Porter Ale.

Moonshine, according to Sackett, is “an unaged whisky and has moved from the backwoods to mainstream in the past few years. It works well in glazes and braises, sauces, side dishes and desserts. It also does well in soups, prepared meals and pretzels. Moonshine pairs nicely with beef and chicken.”

And Sackett describes the Porter Ale as “a pleasing combination of stout and ale – less toasty than stout and less bitter than pale ale. It pairs well with hearty proteins and works well with brats, batters, breads, cheeses, gumbos and soups.” It can be added to braises, BBQ sauces, marinades, stews, soups, condiments and potatoes, according to Sackett, who notes, “Again, the popularity of the craft beer movement is driving the trend for beer as a food ingredient.”