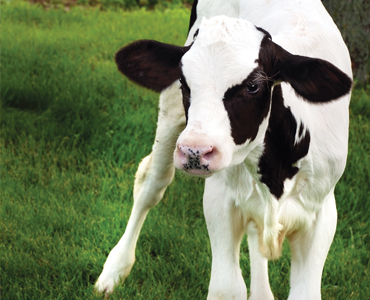 Like foie gras and shark fins, veal has always been a tough sell to consumers.  But that isn’t stopping Mario Maillet from trying –

This month, the company is re-launching its Vivo brand of novel veal cuts and innovative food products, including bacon, ham, smoked meat, and fully cooked roasts. The first product, veal bacon, was initially launched in late 2014 in Métro and IGA stores across Quebec.

According to Maillet, veal bacon sales sizzled from the get go, with weekly production doubling from 500 to 1,200 cases in the first six months. “We were extremely pleased by consumer reaction to the new product, which was the first mass produced veal bacon in the world,” he says.

Both the product and the Vivo line were suspended last summer, however, when the Montreal-area meat processing company that was partnered with Écolait to develop and produce the bacon and other veal products was sold, ending the relationship. But Écolait has found a new partner, Levitts Kosher Foods, a Lasalle, Que.-based meat processor that is part of the Lauzon group of food companies, and the Vivo brand is now set for a return to the marketplace. According to Maillet, veal bacon will start hitting store shelves again this month in IGA, Metro and Loblaw stores in Quebec and Ontario, and in Safeway stores in Western Canada.

A second product, Black Forest veal ham, will begin rolling out in April, with several other products planned for the coming months, all of them low sodium, gluten free and halal quality. “We’ll be bringing out a full range of products this time around,” says Maillet. He is hopeful those products will help to both broaden the appeal of veal and improve the fortunes of a much-maligned, economically challenged niche segment of the Canadian red meat market. “The veal industry is at a crossroads,” says Maillet. “Fresh veal is being sold for below production costs. We need to be more imaginative in the marketplace.”

That was the mindset he brought with him three years, when he was first hired by Écolait, Canada’s leading producer of milk-fed veal. Écolait slaughters some 1,500 mostly bull calves a week from 120 Quebec farms at its slaughterhouse and processing plant in Terrebonne, Que., as well as a cutting plant in upstate New York. It also slaughters and processes roughly the same number of pigs for private-label customers in the United States.

Écolait markets about 40 per cent of its fresh veal in Quebec, where annual consumption is about two kilograms per person. That is roughly triple the consumption rate in the rest of Canada, which is around 700 g. Thirty per cent of Écolait’s veal goes to the U.S., while the remaining 20 per cent goes to other provinces and to overseas markets, notably Japan and the Middle East.

Écolait is a subsidiary of Grober, a Cambridge, Ont.-based company that is the largest integrated milk-fed veal business in North America, with several divisions that do everything from the manufacture of milk replacer to the raising, processing and marketing of up to 150,000 veal calves a year in Canada and the U.S. It is also strategically allied with another Groper affiliate, Ontario’s Delft Blue Food Innovations.

Maillet, an agronomist and former deputy minister of agriculture in New Brunswick who spent a decade as general manager of a pork processing plant for Quebec’s Les Viandes du Breton, and who has worked for Canadian food giants like Maple Leaf and High Life, says the nature and history of veal has made it a traditionally tough sell to modern retail food customers.

Developed by dairy farmers in Western Europe as a tasty and nutritious way to dispose of unwanted bull calves, veal caught on quickly in Canada during the post-war years thanks to immigrant-driven demand and the rise of the Quebec dairy industry.

According to statistics from both the federal government and the veal industry in Ontario and Quebec, which together represent 95 per cent of Canada’s veal market, Quebec accounts for 80 per cent of total national veal production. Most of that production is milk-fed veal, which is popular for its tenderness and pale pink colour. Despite the name, milk-fed veal calves are actually fed a liquid milk replacer that helps to produce their prized pale flesh. Less popular grain-fed calves are also fed hay and grain, resulting in darker, more beefy-tasting veal. Écolait dominates the milk-fed veal market, while Montreal-based rival Montpak does the same in the grain-veal trade.

Regardless of classification, the lives of veal calves are decidedly short, ranging from days for newborn “bob calves” to several weeks or even months for calves sold to veal producers. That tender age, together with the coffin-like confinement sheds that were in widespread use among veal producers here for decades, turned many consumers off veal as a cruel and inhumane source of protein.

Maillet says he’s been working to try and change that perception. One way has been to exploit calf carcasses more like pigs, which he said are similar in size, by developing a variety of veal products like bacon. He worked closely with Bohdan Lozynsky, the Ukranian-born owner of the meat processing company that was sold last year. It took eight months to develop bacon from low-fat veal with the same consumer-friendly profile as pork bacon in regards to texture, smell and taste.

Livetts is now producing the bacon, hams and other products that are being developed and/or fleshed out, including smoked meat and specialty cuts from legs, backs, loins, shoulders and shanks such as veal cutlets, Ossobuco, French racks, and cubes.

In September 2014, Écolait also signed a 10-year partnership agreement with the Atlantic Veterinary College at the University of Prince Edward Island. Under the agreement, researchers are carrying out literature reviews on best-practice meat animal protection and welfare, herd health, housing design, medication trials and meat quality. Training manuals and guidelines are also being drafted for Écolait to use in its dealings with milk-fed veal producers.

Maillet said that many farms are currently being visited and scored according to Kaizen production standards. “We want to establish best-practice protocols to ensure that calves are raised with animal welfare top of mind,” he explains. “Our two main drivers are animal welfare and authentic milk-fed calves.”

Maillet hopes these efforts will lead to a more balanced view of veal production and encourage younger consumers to discover the soft, refined taste of meat that has less fat and more iron and protein than pork, and less saturated fat than beef. That’s the main reason why a fully cooked veal roast and other prepared meats are being developed. “It takes a lot of R&D,” says Maillet. “But veal is not easy to cook for people who are unfamiliar with it, so having prepared meals provides them access to it.”