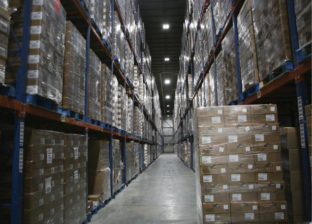 “Your food matters” ­— it’s not only VersaCold Logistics Services tagline, but a reflection of the company’s commitment to ensuring the food produced by manufacturers maintains its quality and freshness from the plant to the retailer, and ultimately, the consumer.

That’s why Canada’s largest supply chain company that handles temperature-sensitive products has made significant investments to achieve the highest standard of food safety. Nearly five years ago, the company began the process of obtaining the British Retail Consortium (BRC) certification for its warehousing and transport sites across Canada. BRC is considered the “gold standard” of food safety certifications and is the first certification benchmarked by the Global Food Safety Initiative (GFSI). Companies with the BRC certification are required to be re-certified every year.

Currently, over 85 per cent of VersaCold’s warehousing sites are BRC certified, making VersaCold the first in this space to have the certification from coast-to-coast. “There are very few refrigerated warehousing companies that have the certification, and we are the only provider that can handle it on a national scale,” says Mark Dienesch, VersaCold’s chief commercial officer.

He says the company is committed to BRC certification not because they felt it was something they had to do, but that “it’s the right thing to do.” Food safety is a 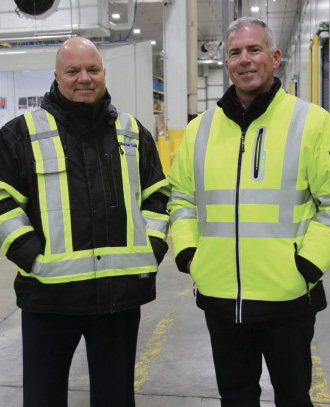 top priority for VersaCold, and is an important component in the company’s goal to enhance their customer’s success.

He says VersaCold’s focus is how it can position itself to best serve clients needs. “Our customers are in business for the long-term, and so are we.” That’s why the company chooses a collaborative approach with its customers to help manage costs and strives to be a one-stop solution.

VersaCold has three business units that work together to accomplish this: warehousing, transportation and integrated logistics. The company has warehouses in every major area of Canada and offers a wide range of storage and distribution temperatures varying from -25 C to 5 C to help customers meet their needs in individual markets. Transportation is all about getting products to market on time and making this as efficient as possible for customers, says Dienesch. In addition to direct to store transport, VersaCold offers LTL (less than a load) transport options where several customers who don’t have a full truckload (for example, a half or a quarter of a load) shipping to the same city can have their loads combined without having to wait to ship a full load. “This is more efficient for these customers, and they can get their product to market and operate on a regular schedule,” says Brian Dove, VersaCold’s marketing manager.

In 2016 the company merged with B.C.-based Coastal Pacific Xpress (CPX) so that it could offer broader North American product handling and delivery of highly specialized temperature and time-sensitive products. With CPX, VersaCold can offer, for example, transport of fresh seafood products from B.C. to the southern U.S., and produce from the U.S. to Canada using a non-stop service where a “sleeper” team of two drivers can run the truck 24 hours a day ensuring that sensitive products arrive at their end destination as fresh and with the longest shelf-life as possible.

A key component of this capability is the use of a state-of-the-art temperature system VersaCold employs amongst its fleet of trailers and warehouses. For sensitive products, the company has three-way multi-temperature trailers, allowing for the efficient shipment of food at three distinct temperatures. For seafood and produce in particular, this is beneficial because fresh fish needs to be stored at 28° F, compared to frozen fish (-20 F) and live shellfish (34 F), and as an example, potatoes and berries require different storage temperatures.

Both the refrigerated trailers and three-way multiple trailers, as well as VersaCold’s warehouses, use Internet of Things (IoT) sensors to monitor real-time temperature, humidity and movement. This provides VersaCold with end-to-end monitoring and is one component of what Dove calls the “brains-side” of VersaCold’s third business unit, integrated logistics.

Having real-time data on temperature and location is not only essential for food safety and quality, but is a helpful tool for Versa­Cold to continue to improve efficiencies, and allows it to share data with its customers. GPS software on the trucks and inventory management software in the warehouses also provides customers the ability to manage their inventory better, says Dove.

Also part of the integrated logistics offering from VersaCold is the company’s team of cold chain assurance experts, who are not only versed in Canadian Food Inspection Agency regulations but with the global supply chain as well. The company has a group that manages 4PL will find a customer the “best, most efficient solution” to get a product throughout North America or around the globe, says Dove. “Be it on a truck or a ship, our team will find a way to get it there.”

Dienesch adds that VersaCold wants to differentiate itself by helping customers model their supply chain, and find ways to optimize in order to reduce costs and improve efficiencies. Part of this, he says, having the space needed for customers to be able to increase production and fill bigger orders, while at the same time offering space for companies that need space for smaller, more frequent orders.

For one of its long-term customers, Nestlé Canada, VersaCold did just that. Wanting to streamline their operations, Nestlé was looking to centralize its frozen category distribution in the greater Toronto area. To make this happen for Nestlé, VersaCold realized it needed to expand its capacity and began searching for a building, says Dienesch.

In 2017, VersaCold found a vacated Sobeys distribution centre in Milton, Ont. that offered over 500,000 square feet of space and easy access to the province’s main highway corridor. Although bigger than what was needed for just Nestlé, Dienesch says VersaCold looked toward future growth and decided to lease the entire building.

While a Sobeys facility the building had both frozen and ambient sections, and to have what VersaCold needed the company had to build a “box within a box,” says Dove, creating a cooler in a frozen environment within an existing building. To achieve this, the building was modified in three phases, which included renovating the pre-existing freezer and including more insulation (particularly in the roof), as VersaCold was running at lower temperatures than had been used previously, says Joe Sammon, VersaCold’s vice-president of engineering. What’s unique about this new facility is that it has doors between sections within the freezer, and can thus be subdivided into different temperature zones.

The Milton warehouse is a “flagship for our customer service,” says Dienesch. In addition to Nestlé, the warehouse has one other large, long-term tenant in addition to smaller ones. The facility operates nearly 24 hours a day, seven days a week to fill orders, which allows a bigger timeline for manufacturers to ship their products. VersaCold has proprietary scheduling, WMS, and TMS software programs that handle all inbound and outbound logistics.