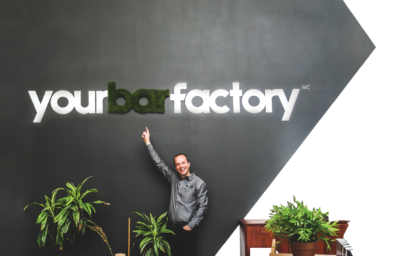 Martin Joyal has come up with a new job title for himself at his food manufacturing company near Montreal. “It’s not on my business card yet but I’m going to call myself the growth, happiness and continuity manager,” says Joyal, owner and operator of Yourbarfactory, a leader in the production of allergen-free bars.

For Joyal, the title neatly captures the things he values and credits most for the success of the business he bought in 2001. Back then, it was named Rapid Snack and was making around a million marshmallow squares that were sold as knockoff brands at local canteens and convenience stores.

Eighteen years, 30 per cent annual growth and one name change later, the company is now making more than 50 million non-allergen bars a year for private labels in 10 countries, including Canada and the United States.

That production is expected to double at Yourbarfactory’s new $15-million, LEED-certified facility the company moved to in January in the off-island Montreal suburb of Chateauguay.

It is there that Joyal puts into practice the particular style of manage­­ment that will soon be spelled out on his business card, which is aimed at spurring growth, keeping employees happy and protecting the life of the enterprise.

“The business has to grow all the time, to give people new challenges,” says Joyal. “When you’re growing it’s a lot easier than when you’re not.”

Growth, he adds, is only possible when employees are happy in the workplace. That’s why Joyal makes happiness an overarching aim and focus for his business’s 75 employees — a workforce that will soon double along with production — and five student interns.

“If you’re not happy, find another job,” Joyal says pointedly. “If not, it’s going to be painful to work with you.” He notably uses a colour code to gauge employees humour and happiness.

“Every week every member of the team is asked, ‘Are you green, yellow or orange or red?’” explains Joyal. “If you’re red, we can dig deeper, get people to help you. You can be yellow, but if you’re red you’re like a bad apple for the others around you.”

Joyal’s third new job title reflects his being ready and willing to protect the company’s bottom line. Sometimes that means making difficult decisions, like the time several years ago when he let go 20 per cent of his workforce during a corporate and brand makeover.

“That obviously wasn’t much fun for the employees who lost their jobs,” says Joyal. “But the decision helped the business survive so it was a good call for the other 40 people who were still here. It’s my job to protect the bottom line because if we don’t have any more money we can’t keep bringing happiness and growth.”

Joyal says he learned and developed those core business lessons during his short but dynamic career working for other companies in the food and retail industries.

It started with a bang when Joyal, a native of Drummondville, Que., studied finance at the Université de Sherbrooke, and took a job with c-store chain Couche Tard after graduating in 1993.

“It wasn’t really what I wanted to do but the job market was hard so I took the job,” recalls Joyal. “It turned out to be a good school with a very entrepreneurial style of management.”

Joyal spent five years with Couche Tard, which then had 120 stores across Quebec. Since then, company founder Alain Bouchard has built it into a multinational behemoth with 15,000 stores.

Joyal worked his way up to regional manager in charge of 12 stores and 70 employees, as well as purchasing and category manager. “I was given a lot of responsibility,” he recalls. “It was like, ‘Okay, you’ve got the key, make it work.’ I’ve kept the same spirit and I use the same approach here in my business.”

“Everybody here is responsible for something, we really turn on that,” adds Joyal. “Everyone knows the principal role for which they are responsible in the organization. That goes from the person at the reception desk, who is responsible for first impressions and brand image, to the people responsible for the plant’s cleanliness and starting on time. That’s a lot more true and motivating than just being called a cleaner.

“And we tell people, if you don’t know what to do, make a decision. We like to say that if you make two good decisions out of every three, then we’ve taken a step forward — but the bad decision, don’t do it again. Learn by your mistakes.

After Couche Tard, Joyal spent two years with Provigo/Maxi, which Loblaw’s had just acquired, where he worked as a bakery purchasing manager for the Quebec-wide chain. “We were buying $100 million a year in product,” says Joyal. “I learned a lot about the retail food industry and got to know a lot of people in the business.”

Joyal left in 1999 to join Humpty Dumpty as a Quebec sales manager. But just two years later he decided to strike out on his own and buy Fast Snack, which was almost bankrupt and available.

“By then I knew pretty much everything about being in business, except as an owner,” says Joyal. “I was always acting as an entrepreneur for others so I decided to do it for myself. I walked the walk.”

The company was housed in a 30,000-square-foot plant in the south-west Montreal borough of Lasalle. When he bought it in 2001 — the same year he and his wife had the first of their two now-teenage girls — Joyal also bought a car and a house nearby.

“It was a big move,” he says. “But I was confident because I know how to manage people, how to negotiate and sell and to talk to bankers. And the factory was easy to understand. I mean, the product they were making only had four ingredients: marshmallows, margarine, Rice Krispies and high-fructose syrup.”

Aware of growing public awareness and consumer interest in healthier eating, Joyal soon began modifying his business’s staple product and producing new ones that were free of fat, trans fat and allergens.

“We were the first peanut-free private label that Walmart accepted,” Joyal says. “Being allergen free has always been our niche. We never do any projects that involve peanuts or almonds or nuts of any kind.”

In 2007 the company started filling orders for private-label grain and cereal bars that were sold across Canada and then in the U.S., two countries that continue to account for 80 per cent of company sales.

Joyal later rebranded and re-baptized the company Yourbarfactory, a name he says is also a statement about the company’s desire to work closely with its customers, which include top-flight North American brands and food retailers, to develop the best possible non-allergen snack products.

“We follow opportunities but we stage gate every one,” says Joyal. “Almost all of our customers are repeat business. Sometimes we do other projects, but must be a good match for us. We have to create things that are delicious but that fall within our parameters. We are known as the allergen-free experts.”

Joyal says Yourbarfactory produces some two dozen new flavour families of bars every year and considers up to 40 new leads a month. The company, he adds, is recognized for being innovative, particularly the award-winning recipe development work of its four-member R&D team of food scientists.

Joyal also continues to sell shares in the company to a handful of senior managers who are now his partners, though he remains the majority owner. “People are more involved if they’re invested,” he says.

Joyal says his main tasks these days at the new company plant in Chateauguay’s industrial park revolve around his new job titles.

“Sometimes I’m the cheerleader or the motivator, other times I help in production or take out the garbage,” he says. “I’m trying to give as much responsibility as possible to the people who do the job. I’m giving them the tools to be more productive rather than telling them what to do.”