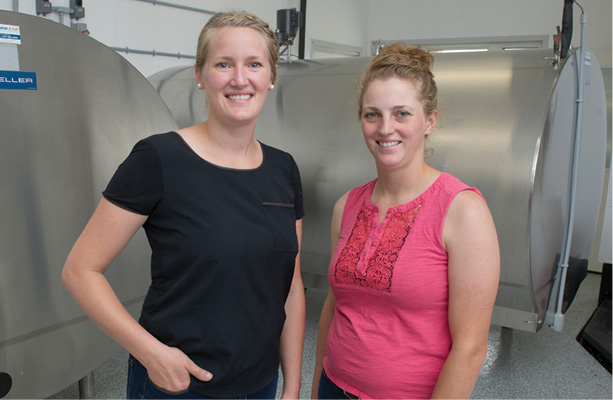 When Emily den Haan returned from a three-month stint on an Australian dairy farm, she brought an idea back for an innovative new product for her family’s farm and milk processing business near Loretto, Ont. That was 2016. And in 2019, Haanview Farms and Sheldon Creek Dairy became the first to produce and market A2 milk in Ontario, and one of only a handful marketing the specialty milk across Canada.

A2 milk is from dairy cows that naturally carry the A2 milk protein (beta-casein). Most commercial milk contains the A1 milk protein, which can cause digestive upset for some people. A2 milk is brand new to the Canadian market and offers an alternative to those who are sensitive to A1 milk.

Emily den Haan, her sister Marianne Edward and husband Mike, along with their parents Bonnie and John den Haan operate Haanview Farms and Sheldon Creek Dairy. They have a total milk herd of about 65 Holstein cows and grow all the feed for their cows on their 500-acre farm. 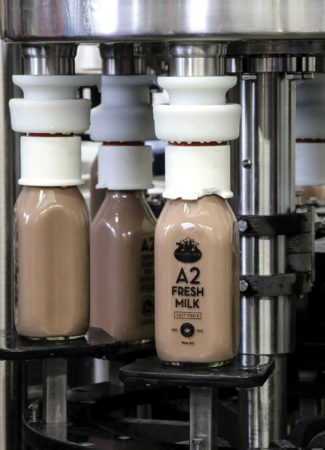 The den Haan’s are not new to the niche milk market in Ontario. In 2012 Bonnie participated in a program about setting up on-farm dairy processing through Dairy Farmers of Ontario. That was the start of Sheldon Creek Dairy, with Haanview Farms supplying the whole, unhomogenized milk marketed under the new brand in returnable glass bottles. “That was quite a process going from dealing just with cows, to operating and marketing a milk processing business,” says Marianne, who manages the Sheldon Creek Dairy side of the business with her husband. “It helped that we’d heard from customers at our sweet corn farm stand that there was interest in buying local, raw cow’s milk.”

With a few years under their belt building a successful line of Sheldon Creek Dairy products — including whole milk, chocolate milk, yogurt, kefir, eggnog and flavoured milk — the den Haan’s began exploring the idea of adding A2 milk to the line.

A2 offers a new niche

“There are a lot of people with sensitivity to milk. They love it but have moved away from it,” says Marianne. “The idea of adding an A2 fresh milk line means that you have changed the lifestyle for people who have avoided milk and milk products. It’s very exciting for us and for the market to be able to offer a product that means people can come back to milk again.”

A new product like A2 milk, in an entirely new category, requires a tremendous amount of education. But that’s something the den Haan’s have great experience with their existing fresh milk line. “When we launched our whole fresh milk in 2012, we decided not to homogenize. The only way to survive is to be in a niche market and provide a product that’s not already on the shelf,” says Marianne.

They knew the flavour from whole milk was so good, and nobody else was selling it at the time. “We did a lot of education with our customers about using a bottle of milk that comes with cream on top,” says Marianne.

That education continues to be an important part of their marketing when talking to people who might be interested in trying their new A2 fresh milk. 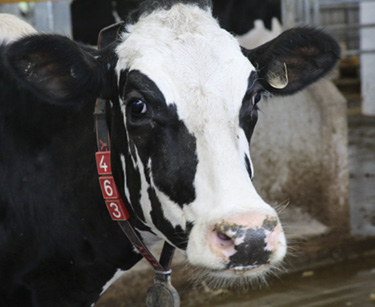 A2 milk, first popularized in Australia, contains a protein that is easier for some people to digest than the protein found in most milk. All dairy cows naturally have two beta-casein proteins — a combination of A1 or A2. A1 is in most commercially available milk and is the component that can cause digestive upset for some people. The A2 protein is generally easier to digest and is similar to goat, sheep and buffalo milk. Every cow has two of these proteins and they can be a combination of A1A1, A1A2 or A2A2. When cows are A2A2, they produce milk that only contains the A2 betacasein protein and can be enjoyed by consumers who may have trouble with A1 milk. Photo: Christina Manocchio

The first step in creating the new line of milk began with genetic testing of the den Haan’s 60 cow dairy herd. With a simple hair sample, they discovered that 30 per cent of their herd naturally contained the A2A2 milk protein needed to produce 100 per cent A2 milk.

“When we realized how many A2 cows we had in the herd, it solidified our decision to add a new A2 fresh milk line,” says Emily, who manages the Haanview Farms dairy herd.

The next step was working with the Dairy Farmers of Ontario (DFO) — the regulating and marketing body for all milk in Ontario — to explore the realities of producing a line of A2 fresh milk. “DFO was extremely supportive of our idea, and we worked closely with them to figure out how to produce pure A2 milk,” says Marianne. “We knew a blend of A1 and A2 wouldn’t work because if we were going to market to people with a milk sensitivity it couldn’t be a blend.”

Around this time, the den Haan’s had started looking at installing a new robotic milker for their herd, primarily to address ongoing labour shortages. “We definitely wouldn’t have been able to add the A2 product line without a robotic system — and the plan to add A2 gave us a stronger reason to go to robots,” says Emily.

The new robotic milker — that lets cows choose when they are milked — also meant they could accommodate two separate streams of milk. While about 30 per cent of the Haanview Farms dairy cows produce A2 milk, the rest of the herd supplies the whole milk used in the main Sheldon Creek Dairy product line. All the cows eat the same food, and the new milking system keeps the two types of milk separated for processing.

That’s why two separate sets of food-grade stainless steel pipelines and bulk tanks were needed to ensure A2 and conventional A1 milk stayed separate throughout the milking and storage process. The den Haan’s applied to the Greenbelt Fund to help cover about 30 per cent of the costs for the “separation” equipment needed with their new robotic milker.

“This funding from the Greenbelt gave us the assistance we needed to take our business to the next level — helping us innovate to be able to add our A2 line,” says Marianne. “Innovating is risky and it takes time and money. It’s great to have groups like the Greenbelt Fund that help small businesses be successful, providing local products in a local market in an innovative way.” 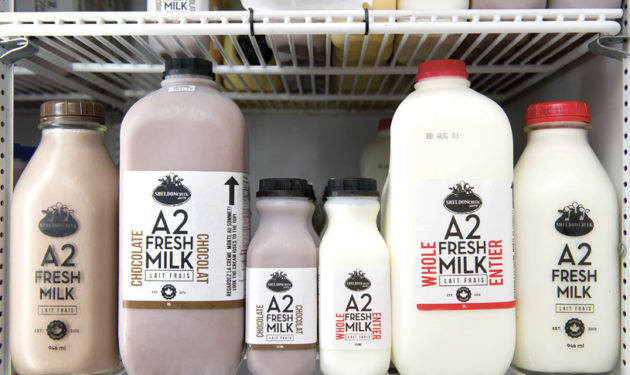 Greenbelt Fund’s investment also helped equip the full herd with neck transponders that identify each cow as conventional or A2 in order to direct their milk to the appropriate bulk tank for processing. The two streams of milk are processed on different days at Sheldon Creek Dairy to ensure there is no cross-contamination between conventional and A2 whole milk.

What they’ve learned about marketing their new A2 milk is that the A2 customer is completely different from the consumer of their other milk. “Our A2 customer has turned away from milk because it makes them feel bad,” says Marianne. “But they miss it. They want milk on their cereal, in their latte. And if they try it, they realize it works and that makes them feel good about milk again.”

They also learned to be patient. “We learned early that controlled growth is the best growth,” says Marianne. “When you have a specialty product like A2 milk, it’s not going to fly off the shelf. It’s going to take time.”

To market their entire Sheldon Creek Dairy line, Marianne focuses on existing retailer markets to add the A2 line of fresh milk. They launched A2 whole milk on Valentine’s Day this year, and A2 chocolate milk on the May long weekend. All Sheldon Creek Dairy products are sold through chain and independent retail markets in southern Ontario, including the Greater Toronto Area, with about 30 per cent sold at their on-farm store and through local farmers’ markets.

“Our biggest challenge to expanding our line with A2 was making sure all our ducks were in a row for the entire production process before we started,” says Marianne.

“But as our mom has always reminded us, you also need to celebrate your successes — it’s got to be fun or it’s not worth doing,” adds Emily.

As for the next challenge, well, there’s a new production facility in the works, and they are expecting the A2 line of Sheldon Creek Dairy fresh milk to become a bigger part of the product line, eventually adding in milk products including yogurt and flavoured milk.