Whether for spreading, cooking or baking, margarine and butter have been cohabitating in our kitchens for decades. 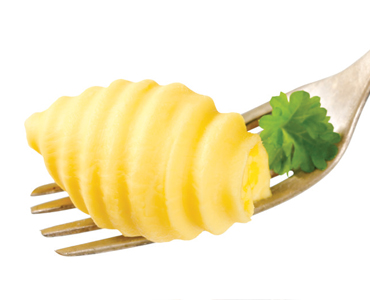 Whether for spreading, cooking or baking, margarine and butter have been cohabitating in our kitchens for decades. While consumption patterns have ebbed and flowed over the years, margarine continues to hold its place as a healthy, spreadable and affordable alternative to butter.

The origins of margarine date back to 1813, when French scientist Michel Eugene Chevreul discovered a new fatty acid he coined acide margarique – from the Greek word margarites meaning “pearly” – to describe the pearl-like deposits it contained. Many years later French chemist Hippolyte Mège-Mouriès would develop a cheap butter substitute which he patented as Oleomargarine.

Over the centuries since, margarine’s existence has been an uphill battle of sorts. Dairy farmers have never been too pleased at the availability of an affordable butter substitute. In fact, margarine was banned in Canada until 1948, and until 1961 in Quebec.

Laws around margarine became the domain of provincial governments in 1950, and largely focused on colour restrictions. Dairy lobbyists argued that yellow margarine was fraudulently masquerading as butter, so in some provinces margarine had to be coloured a very bright yellow, while in others it was sold colourless – a rule which remained in place in Quebec until 2008.

Despite its history, margarine has managed to carve out a competitive place in the Canadian shopping cart. We recently asked 50 females between the ages of 25 and 54 from the Greater Toronto Area to evaluate four unidentified brands of margarine which they self-spread on a piece of bread for tasting. Participants were asked to evaluate the appearance, flavour and texture of the margarines.

Among our taste testers, close to 80 per cent claimed to be regular purchasers of both margarine and butter, with margarine accounting for an average of 58 per cent of their cumulative last 10 purchases. When probed on their main reasons for buying margarine instead of butter, one third stated affordability, while one third claimed it was due to the ease of spreading. The remainder was split among reasons related to health, taste or utility for cooking.

The battle between our four brands of margarine resulted in a split between two strong performers and two weaker ones. The winning brands tended to stand apart, with more enhanced flavour profiles that were slightly sweeter and saltier. Our winners were also rated as very soft and spreadable, which not surprisingly was a key driver of likeability in this category. There were no significant differences in the taste and textural profiles between our two winning brands, but appearance did play a large role in determining a winning spread in this category.

One of the more differentiating aspects was appearance – both in terms of the colour and degree of shininess. The colours of our four contenders ranged from a whitish hue to varying shades of light yellow. Two of our brands had much more appealing looks than the other two in all aspects, including colour, shininess and naturalness. The margarine with the darkest yellow was preferred, while there were few fans of the whitest spread. The darkest yellow margarines were also directionally rated the most natural, revealing an interesting misnomer – consumers may believe that a darker margarine is more natural because its colour is more akin to butter. One brand was significantly glossier than the other three, which most participants did not find appealing.

Margarine has a well-established footprint in the dairy sections of Canadian grocery stores as it continues to meet the need for a more affordable and spreadable butter substitute. But as a result of years of regionally driven regulatory barriers, consumer expectations of margarine are dogged by regional influences. So in Quebec, a white-coloured margarine may be considered the norm, while a softer, glossier yellow margarine may be preferable in Ontario. This is a liability for margarine manufacturers, especially in contrast to the universally identifiable and consistent profile of butter.

As long-standing regulatory pressures subside, a universally accepted profile for margarine may continue to emerge. Consumers will continue to seek out more affordable and spreadable butter substitutes, and the best margarine profiles will end up with the greatest share of the proverbial bread.