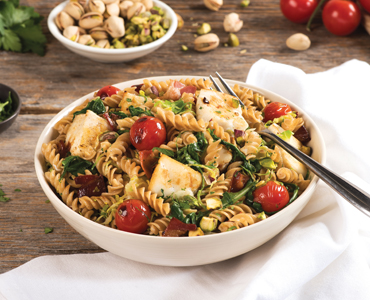 Catelli Foods Corp. director of Marketing Doyle Brown agrees that pasta likely isn’t the first food people think of when planning menus for formal meals or to entertain. But he says the wheat-based noodles are top of mind when it comes to more relaxed or impromptu meals with close family and friends. “Pasta is such a simple food and so accessible,” says Brown from Catelli’s Toronto office. “It’s a great go-to recipe when there is no need to do anything elaborate.”

It’s that intimate connection that Catelli products have enjoyed in the daily lives of millions of Canadians over the past 150 years and counting that Brown says inspired the development of marketing campaigns to help celebrate the milestone anniversary the company shares with Canada in 2017. Founded in Montreal in 1867 by Carlo Onorato Catelli, the company is the largest marketer and distributor of pasta and second largest marketer and distributor of rice in Canada.

A key element of the marketing campaign was the Canada-wide Catelli Family Reunion Contest. Between Feb. 28 and April 4, Canadians were invited to log on to www.catelli150.ca and write a short text of 200 words or less on who they would bring to a family reunion this summer, how those people inspired them, and why your family needs to reconnect.

Three grand prize-winners (one from Quebec and two from the rest of Canada) were chosen, with each receiving up to $10,000 to invite up to 20 people to a family reunion and gourmet chef-cooked meal at a Canadian venue of their choice sometime between June and August. “We will provide a party for them, take all the stress out of planning and putting it on,” says Brown. Public response to the contest, he adds, surpassed the company’s expectations. “We had 4,000 entries by the end of March, with a week to go,” notes Brown.

Another national celebratory campaign is the Catelli 150th Anniversary Recipe Collection. Whipped up by celebrity chefs and available on the Catelli.150.ca website, the dozen dishes are both inspired by and based on comments from Canadians on their favourite or most memorable pasta meals, what influences their food choices and how they want to reunite. “As a chef, I love the idea of family reunions, especially when it combines local tastes and regional specialties,” says Chef Cory Vitiello in a Catelli press release. “Developing this recipe collection alongside my fellow network chefs and foodies has been a special experience, as the recipes are literally inspired by what Canadians are telling us.”

That information was gleaned from an online survey that Catelli’s marketing team designed and carried out with Environics in late 2016 to help plan celebration strategies for this year. A whopping 85 per cent of the 1,700 Canadians who participated in the survey said they wanted to cook with more fresh, local or regional ingredients. That figure jumped to 90 per cent for parents with children at home. Eating local and fresh foods also scored between 86 and 88 per cent according to region.

More than half of respondents also said they had more motivation to celebrate with friends and family in 2017 because of Canada’s sesquicentennial. When making a meal for a family get-together, 35 per cent of respondents said they sought to make a dish that was “guaranteed delicious,” while 33 per cent said they followed “tried and true” recipes.

The survey also found that in today’s fast-paced world, roughly 80 per cent of people wished they could connect in person with family and friends more often. The response was even stronger (88 per cent) for people with children. Distance (51 per cent), finances (46 per cent), schedules (45 per cent) and no time (36 per cent) were the leading reasons people gave for preventing them from making reunions happen.

According to Brown, the key take-away messages from the survey, which led to the development of both the recipe collection and the family reunion contest, were people’s ardent desire to connect with loved ones, and the importance of shared meals at family get-togethers. “They are common threads that run throughout,” he says. “And they are entirely consistent with our DNA, because families have always been at the core of our brand. People have beautiful memories and reunions tap into those special moments. And because pasta is such a good everyday meal, many of those moments involve pasta, and often recipes that people and families have personalized and use as their go-to dish.”

Brown says Canadian consumers readily identify with pasta and Catelli. “Our products have been a staple in Canadian households for generations of families, including mine,” he says. “I’m a huge consumer, and so are my wife and kids.” He adds that the Catelli brand, which is a subsidiary along with the Minute Rice and Healthy Harvest brands, of Spain’s Ebro Foods, the world’s second-largest pasta maker, has managed to remain Canada’s number-one pasta brand thanks to the development and introduction of new products.

Those products include: Healthy Harvest, made from 100-per-cent whole grain wheat; Catelli Smart, white pasta with added fibre; market-leader Gluten Free; and Ancient Grains. The latter product was launched in Western Canada in 2015 and leads that market, and is now being introduced to the rest of the country. Other innovative products include Smart Veggie pasta, which were developed to help parents sneak more nutrition into their kids’ meals, and SuperGreens, which is green pasta with kale, spinach and other green vegetables that Brown says is proving popular with older consumers (and which was selected as best new product in the 2017 BrandSpark International survey).

“You can’t sacrifice on taste and texture, and that’s always the challenge, but the nice thing here is that we’ve done that,” says Brown. “We are constantly working to identify consumer needs and validate them by developing innovative new products that resonate with consumers. We need to be obsessed about it if we want to continue celebrating such big milestone birthdays with Canada.”