Nutrition in a wheel

Known for its smoothies, Evive has launched a line of RTE lunch bowls and cereals 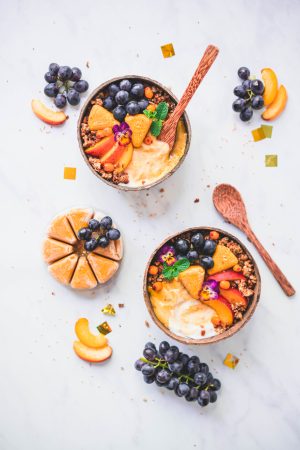 When Claudia Poulin and Dominic Dubé first started making and selling frozen smoothie cubes as university students in Sherbrooke, Que., six years ago, their goal was to break even. After racking up $27 million in sales in 2021—a figure they think could reach $38 million this year—the entrepreneurial couple continues to work hard to develop new products, open new markets and transform their company, Evive Nutrition, into an international food brand.

“Every year it feels like we’re on the starting line, but we’re not taking our feet off the accelerator,” Dubé told Food in Canada recently from Texas, where he and Poulin were in the midst of a three-month road trip with their first child, a six-month-old boy named Louam, to showcase their wares at food stores across several southwestern American states, including California.

The couple’s trip is a follow up to their entry into the US food store market in 2021, a foray that was launched online and targeted all consumers. Dubé said the company got most traction in and around the large population centres on both the East and West Coasts with the most smoothie-hip demographics.

In addition to online sales, Evive Nutrition products are now being carried in eight distribution centres and sold at more than 500 natural and organic health food stores in the US, including both independent and chain stores, as well as online.

The company successfully used the same game plan here in Canada, where it sold product online from the get go, as well as to independent natural health food stores in Quebec before expanding nationwide through major grocery store chains, such as Loblaws, Sobeys and Save-On-Foods.

“We’re trying to recreate the same strategy here in the US, which is to create brand awareness,” said Dubé. “We’re doing it region by region, state by state, store by store. It’s just that the scale here is so much bigger.” 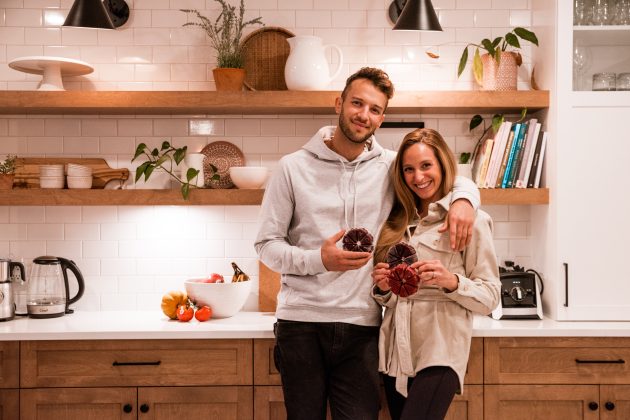 According to Dubé, the blender-free ease of Evive Nutrition’s three lines of frozen smoothie and meal cubes, as well as a newly launched line of ready-made frozen muffin cubes, is the wow factor that continues to set his company apart from the competition and help convince both retailers and consumers to give their healthy food products a try.

“We always get a great reaction from store owners or broker partners when they see our products for the first time or try some of our new ones,” said Dubé. “There’s nothing like them anywhere. It’s an entirely new category that excites people.”

In January, for example, he said a major food store retailer who he and Poulin pitched to in Texas told them she would place an order immediately if they promised to make the words ‘Blender Free’ bigger on their packaging. “We said yes, and she bought it on the spot,” recounted Dubé, laughing.

Enthusiasm for Evive products has never been in short supply. It’s been that way since 2015 when Poulin, a budding vegan who was taking psycho-educational courses at the Université de Sherbrooke, started making smoothies every morning for her and Dubé, who was studying to be a mechanical engineer. 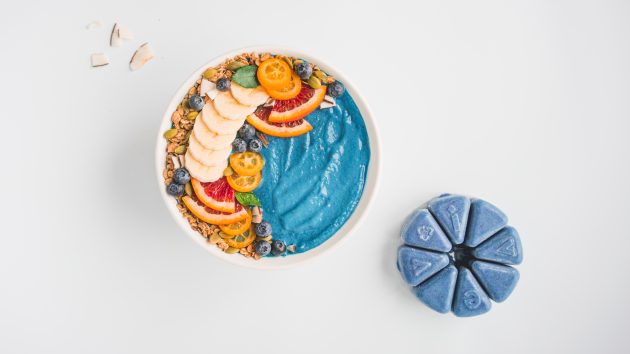 The innovative concept of a plastic wheel to hold eight frozen cubes needed to make a single smoothie changed the company’s fortunes.

To save time, they started making trays of frozen smoothies that they cut up into cubes by hand and put in the freezer in plastic bags.

In the morning they would put a handful of the cubes into a Mason jar or bottle and add enough water, milk or other liquid of choice to cover the cubes. The cubes were then left to melt for about 15 minutes, shaken and, viola! a fresh smoothie without the use of a blender.

Eager to share their idea and wholesome recipes with the world, and make a buck doing so if they could, the couple started making and selling their cubes, first on Facebook and to friends and fellow students, then through local natural food stores.

As sales and distribution increased, they moved production into a small pilot plant with a commercial kitchen at Agriculture and Agri-Food Canada’s research facility in Saint-Hyacinthe, an hour’s drive away.

There, Dubé hit on a key innovation that literally and figuratively changed the company’s fortunes: a round plastic wheel that holds the eight cubes needed to make a single smoothie.

“We were still cutting cubes by hand,” recalled Dubé about the production process, which was done in two shifts. “It was brutal work. Both of my wrists were injured from doing it and we couldn’t figure out how to scale up without having to buy a machine we couldn’t afford. I was ready to quit.”

In a timely eureka moment, Dubé hit on the idea of pouring smoothies into moulds on a plastic wheel while working on the notion of using a circular tray to freeze smoothies instead of the bulkier rectangular trays they were using. “It was the best idea I’ve ever had,” he said.

In addition to eliminating the need to cut, handle and bag frozen smoothie cubes, the sealed moulds on the plastic wheels meant that the product could be shipped, thawed and refrozen after mailed delivery to online customers.

The company’s now-patented wheel also helped Evive Nutrition stand out in the highly competitive smoothie category, which has grown exponentially in recent years. “That’s where consumers are going,” said Dubé. “Smoothies combine convenience, nutrition and great taste in foods that are family friendly.” 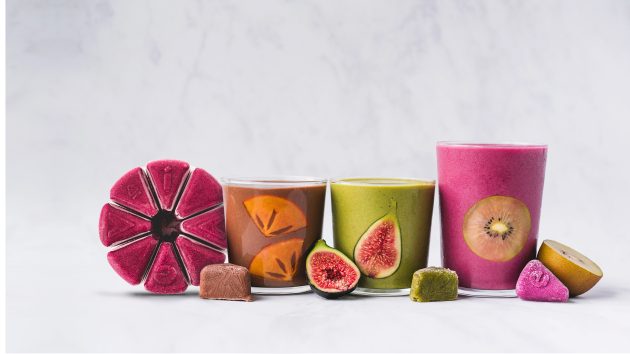 Evive has grown 300 per cent year-over-year, and has sold more than 10 million smoothies.

Initially, the company made a few flavours of smoothies using bags of mostly locally procured and sometimes locally produced fruits, vegetables and other plant-based, organic and gluten-free foods and ingredients.

It now produces three smoothie lines—Energizing, Extra Protein and the latest, Super Functional, which was launched online only in November 2021—as well as a line of lunch bowl and soup options.

The company has enjoyed 300 per cent year-over-year growth and has sold more than 10 million smoothies, which make up half of its 22 product SKUs, both online and through some 2,500 retail locations across North America.

Company sales notably skyrocketed following the couple’s appearance on CBC’s Dragon’s Den in 2019, when they were doing just over $1 million in sales and were seeking a $100,000 investment for a 10 per cent stake in the company.

They got offers from all five dragons, including a winning offer of $150,000 for a 10 per cent stake from Manjit Minhas. Minhas ended up not investing in the company, much to the delight of two private funds, Quebec’s CSN union-backed Fondaction and Vancouver’s Renewal Funds, which did.

This winter, Evive added to its product line ready-made Choco-Spice muffin bites. Made with superfoods like hemp seeds and baobab, the frozen vegan- and gluten-free snacks, which come in a six-portion wheel and can be made in an easy four-step, 35-minute baking process, the muffins are a perfect addition, Dubé says, to a food company with a mission to make and provide healthy foods that are convenient and good for people from all walks of life.

“They’re great because they save people from having to make a mess in the kitchen,” Dubé said about the muffins, which were formulated and produced—like their other products—by he, Poulin, and food scientists at their production partner’s facility in Montreal’s South Shore region.

The muffins were also notably taste-tested by thousands of online subscribers, some 70 per cent of whom provided written feedback on the new product. “We learned a lot of things,” said Dubé. “We increased fibre, for example, and did some minor tweeks to check all the consumer need boxes.”

He added that allowing working moms and other Evive product users the opportunity to taste-test, comment on and/or order through the company’s eye-catching website or social media platforms is another major competitive advantage.

“It’s great because we want to develop and bring new products and food ideas to the marketplace,” Dubé said about Evive, which now has 55 employees who work mostly remotely to handle marketing, customer support and R&D. “Evive is an innovative nutrition brand with delicious and healthy blender-free smoothies that have raised the standards for budget-friendly, ready-to-go meals.”

This article was originally published in the April/May 2022 issue of Food in Canada.