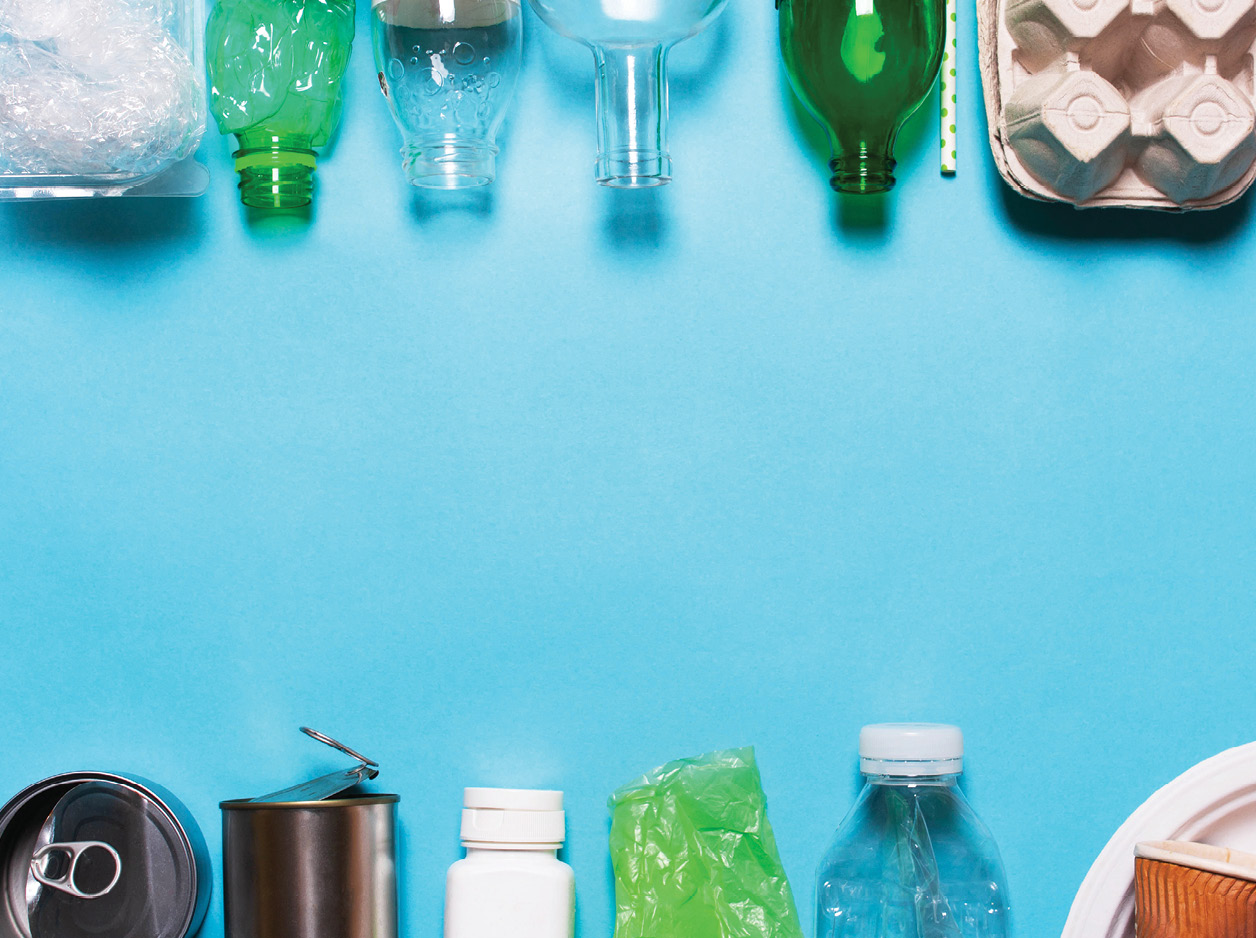 From industry-wide initiatives to private partnerships, there is a great deal happening with sustainable food packaging in Canada today.

Currently, new innovations are being marketed and recyclable packaging for all food products (in many cases made completely from recycled materials) are slowly but steadily supplanting their non-recyclable ancestors while keeping food fresh for the same length of time or longer.

At the government level, provinces such as Ontario have directed the food product manufacturing sector to keep packaging “in the economy and out of landfills.” To align with this, more than 250 firms, including Toronto-based Club Coffee, have implemented How2Recycle and How2Compost labelling, which empowers consumers with simple instructions on exactly what to do to ensure the packaging is disposed of properly.

Last year, the Canadian Produce Marketing Association launched its Plastics Packaging Working Group and so far, it has accomplished a great deal. To ensure plastics within the produce sector are reusable, recyclable or compostable, the group has identified sustainability efforts already undertaken by Canadian players, and continues to investigate innovations and determine best practices. It has also commissioned research on consumer perceptions, industry practices and regulatory requirements, surveyed sustainable packaging activities around the globe and consulted with industry on product design and more.

In June this year, the group published the CPMA Preferred Plastics Guide to help its members make sustainable packaging decisions. It will be updated over time as developments occur.

In terms of plastic substitutes, the group notes that while an increasing number of products are emerging, from cutting-edge bioplastics to products made from traditional, biodegradable wood fibre-based materials, these substitutes require robust collection/compost programs in order to close the sustainability loop. CPMA will be releasing a material selector guide later this year to support members in dutifully assessing options between plastics and alternative packaging materials.

But we must return to plastic, which is used extensively to package produce and many other products, and will likely continue to be used widely for the foreseeable future. Within the plastics realm, advances are being made to boost recyclability, use of recycled materials, and to reduce the amount of plastic in packaging through “light weighting” and other product design avenues.

At a CPMA webinar in June, Brad Malchuk, president of B.C.-based packaging firm Fastik and a CPMA Packaging Standards Committee member, spoke on opportunities for plastic reduction through the use of lidding films. These films are commonly found on the tops of containers containing cherry tomatoes, for example. Fastik has studied how much total plastic can be reduced through using a film to close a container compared to a typical 5-oz. clamshell, and found it can be as much as 75 per cent.

Today, both lidding films and clamshells are generally made of recyclable PET (more on this type of plastic later) and can also include up to 100 per cent recycled content. In addition, companies like Fastik are currently developing compostable lidding films. Even with all these developments however, Malchuk says most produce is still being packaged in full clamshells. He explains that ultimately, it’s the retailers that drive packaging decisions and he believes that adoption of lidding film will grow as more retailers such as Costco lead the way.

In terms of other main developments, Malchuk explains “there is a movement now to make plastics from a single source so [containers] can be more easily separated in recycling… This means there is a higher chance of these products actually being recycled.” A great deal of produce packaging, he notes is still made from “mixed laminates,” which are “film structures with more than one type of plastic, such as citrus bag film which mostly is made of polyester and high-density polyethylene.”

An important example of a single-source plastic is PET (Polyethylene terephthalate). As explained in a CPMA Technical Report, it’s Canada’s most widely-recycled plastic, the most commonly-used plastic in produce packaging in Canada, and it can be made from 100 per cent recycled material. Indeed, about 129,000 tonnes of recycled PET is produced annually in Canada, most of which is presently exported.

However, domestic demand for recycled PET is growing, as major Canadian produce firm Vegpro (its CEO Gerry Van Winden sits on the CPMA Plastics Working Group) transitions all of its Fresh Attitude salads into PET containers made by Cascades from 100 per cent recycled plastic. The transition will be complete by early 2021.

Luc Prévost, Vegpro’s vice-president of sales and marketing, explains that “by doing this, given the size we represent in produce — altogether we produce 1.4 million Fresh Attitude salads a week — we are creating a market for recycled plastic. You need a substantial player to get this going and that was missing in the produce space. There’s a demand for recycled plastic now and we’re thrilled about that.” He adds that “we are not limiting Cascades from offering this to others. It’s a step in the right direction.”

To ensure a long shelf life, the bottom and top of the containers have ribbing so that the baby lettuce leaves don’t rest on top of each other. 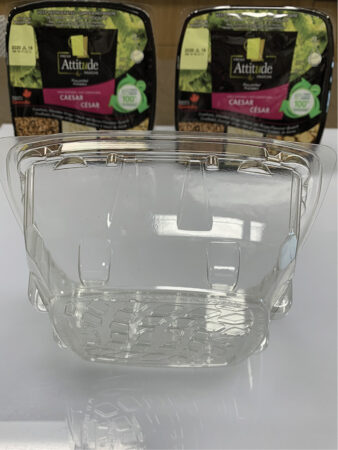 PE (polyethylene, a different material than PET) is another plastic that is being used as the only source in packaging, with new advances making the packaging recyclable while still maintaining the quality of the enclosed product. For example, for the last decade NOVA Chemicals has offered a non-laminated PE recyclable pouch called SmartPack, and in 2016, the company introduced a PE bag with a multilayer film structure that is also recyclable.

Recently, NOVA worked with Emmerson Packaging to create an all-PE fully-recyclable (#2 HDPE stream) and resealable stand-up bag for Anita’s Organic Mill, a B.C. company that markets dozens of flours, cereals and mixes. Anita’s had been using paper bags lined with plastic that were not recyclable. The new bags have two films laminated together, a three-layer external film and a three-layer internal sealant film, allowing them to provide the same performance and cost-competitiveness of the previous mixed-material bags.

TC Transcontinental Packaging has also created a multilayer PE stand-up pouch that is recyclable and resealable. It’s being used, for example, by Harney & Sons for its loose teas. TC has also already launched films and pouches incorporating recycled materials, and new compostable peanut snack bag packaging. Rebecca Casey, TC’s senior vice-president of marketing and strategy, adds that “currently we offer films that are compostable in industrial compost settings, but we are nearing commercialization of a compostable solution suitable for degradation in a home compost.” 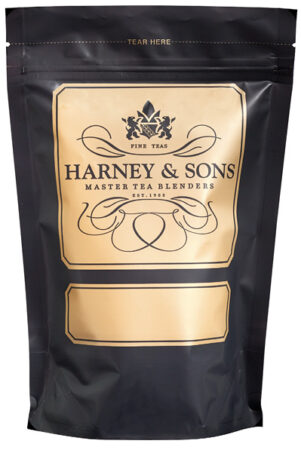 Company leaders wanting to make their packaging more sustainable obviously need to look at what’s now available in terms of flexible (pouch/bag) options, biodegradable alternatives and more, notes Dawn MacDonald, research development manager at Emmerson Packaging. “We always encourage our customers to review their product specifications with a holistic view,” she says, but also cautions that “recyclable, biodegradable and even bio-based resins may not always be the best first step. Down-gauging [making materials thinner] can be very affordable and even the smallest of changes can not only reduce costs but reduce the potential impact on the environment.”

For his part, Malchuck believes plastics are vital in packaging many food products to ensure food safety and more, and that opportunities to reduce the amount used, and to improve the recycling and recyclability of plastic packaging, will continue to grow. He also foresees that some plastic packaging in the produce sector, such as plastic trays, will be replaced by those made from traditional wood-based alternatives that easily degrade. “We are currently developing lidding products to support the wider-scale use of fibre trays,” he says. “I hope to see more fibre tray companies investing in technology to make trays which can resist moisture and maintain their recyclability. There are not enough companies doing this yet.”