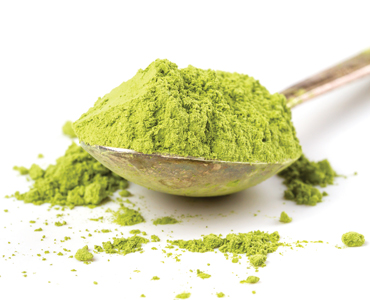 These days, it’s not uncommon to walk into a trendy café and hear the person in front of you ordering a foamy matcha latte. You might even spot a fellow customer munching on a bright green matcha cupcake.

According to a 2015 research report on matcha from the Seattle-based Sage Group, sales of the traditional Japanese green tea have indeed been skyrocketing in North America and will continue to do so. The report, which called matcha “a major trend with long-term viability,” predicted that sales of matcha in the U.S. and Canada would grow by 25 per cent annually, compounded year to year, between 2015 and 2018.

Matcha dates back to 8th-century China, but it was introduced to Japan in the 12th century. While it soon fell out of favour in China, it went on to become extremely important in Japan. As the tea used in the traditional Japanese tea ceremony, matcha continues to hold an important place in Japan’s cultural customs today.

Matcha is a green tea with some unique qualities. It’s powdered, for instance, meaning the leaves have been crushed into an extremely fine powder form. So instead of steeping the tea leaves (whether loose or in bag form) in hot water and discarding the leaves after making the tea, all the powder is dissolved into the boiled water, which essentially means you are ingesting the entire tea leaf. Matcha is therefore much more potent. The caffeine levels in a cup of matcha typically equal those in approximately half a cup of coffee, while the beneficial elements of green tea (such as antioxidants, nutrients, amino acids and chlorophyll) are up to 10 times higher in concentration in a cup of matcha compared to regularly brewed green tea.

It’s grown in a unique way too – prior to the harvest, matcha plants are shaded under bamboo mats or tarp to protect the leaves from the effects of the sun. And the stone-grinding process to create the powder is very time-consuming, taking up to one hour to grind 30 g of matcha.

“I would describe matcha as a super food,” says Dan MacDonald of Vancouver-based Domo Tea. “The benefits are countless.” Matcha aficionados praise the tea for its ability to boost energy and metabolism, lower cholesterol, prevent disease, and enhance mood and concentration, among other things.

While it’s often tricky to make precise health claims when it comes to food products, Sinclaire points out that many of the qualities attributed to matcha have scientific studies to back them up. According to a study published in the Journal of Chromatography A, for instance, matcha has three times more epigallocatechin gallate (EGCG) than regular green tea. EGCG is a catechin, which is a phytochemical compound that acts as an antioxidant and is believed by many to help fight cancer, viruses and heart disease.

Not just for sipping

Matcha is consumed in traditional tea form throughout North America, of course, but it’s become so much more than that. In addition to those trendy matcha lattes, matcha powder is becoming a frequent addition to smoothies and shakes. “I’ve even seen matcha popsicles – people are making those and they’re fun,” says Domo Tea’s MacDonald.

Matcha is also increasingly being used as an ingredient in baking. Countless bakeries now sell an array of matcha cupcakes, muffins, cakes, cookies and more, with the matcha acting as a natural colouring that gives these baked goods an unmistakable bright green hue. And matcha ice cream regularly appears on many North American restaurant menus and in grocery freezers (the Häagen-Dazs green tea ice cream, for example, is actually made with matcha).

In Japan, the Matcha Kit Kat chocolate bar is a popular packaged treat – and in fact, the bright green Japanese Kit Kat has become a highly sought-after product in the eyes of many North Americans looking to try it, many of whom end up ordering them online from Japan. Sinclaire says he wouldn’t be surprised to see more of these types of treats filling Canadian store shelves soon.

“I think information about matcha has really spread to the West,” adds MacDonald. “Looking back 20 years ago, very few people here knew what it was; today, it’s just exploded.”