Husband and wife entrepreneurs ramp up new plant and products 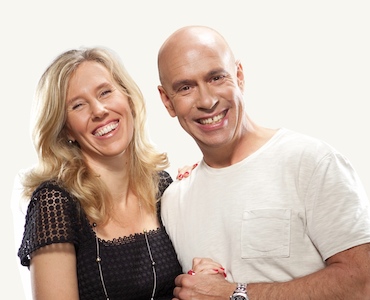 Bernard Le Grand loved the old building just west of Montreal where he and his wife Tatiana Bossy raised their family business and watched it grow into one of Quebec’s largest fresh sauce makers. But the rock-musician-cum-food-entrepreneur says he wouldn’t dream of moving back there now that he’s had a taste of the couple’s new state-of-the-art facility in the nearby town of Blainville.

“It was warm and beautiful,” Le Grand says about the old school house that he converted in the late 1990s when his fledgling pesto-making business outgrew the small workshop he started it in behind his family’s home in St. Joseph du Lac. “But this is such a great plant,” he says. “Now we have everything we need to flourish.”

To be sure, the new $3-million plant that Maison Le Grand moved into in October 2013 is a big step forward for the business, and a

testament to the owners’ righteous convictions about food quality and eating well. Built according to Le Grand’s specifications by Mirabel-based Syscomax, a food facility construction specialist, the modern 15,000-sq.-ft. facility features several novel designs for the food industry. These include offices separated by glass (so that the owners and the plant’s 20 employees can always see and be seen), and a production area with large exterior windows. “It’s nice to look outside and see trees and the light of day when you’re working,” says co-owner Bossy.

But it is the cutting-edge equipment in the production area, together with the work being done in Le Grand’s experimental kitchen and the research and development by Thomas Sérouart, a fermentation expert who previously worked for yeast company Lallemand, that reveal the plant’s true raison d’être: the development and production of 10 times the amount of Maison Le Grand’s popular – and growing – line of fresh sauces.

Those products include the original pesto that made Le Grand’s name in the food business (and which now, according to Bossy, enjoys a 63-per-cent market share, making it one of the top five selling fresh sauces of any kind in Quebec), three non-dairy rosé sauces, four side pesto sauces, and three newly launched sauces: alfredo, bolognese and ratatouille. All are packaged in uber-chic Japanese-style pouches resembling old-fashioned Mason jars. They are sold in major grocery chains across Quebec where they retail for between $6 and $7, Loblaw stores in Ontario, and specialty chains like Whole Foods Market and The Fresh Market in the Northeastern United States. The couple hopes to soon add other major retailers, including Costco, to their client roster.

Expansion opportunities are limited, however, by the fact that Le Grand’s products are made entirely with garden-fresh ingredients. “Fresh products have a shorter shelf life, which is why many companies don’t use them,” explains Bossy. “But we believe in fresh, and we don’t take shortcuts.”

That’s why the new plant uses high-tech steam injection systems to heat product and ingredients rather than kettles, which are the traditional standard in the Canadian food industry. “They are not cheap,” Le Grand says about the company’s German-made systems. “But when you use steam, the protein in the food is not destroyed. And making the best possible products is what we are focused on.”

That focus began 20 years ago, when Le Grand, a drummer and budding food entrepreneur from Manitoba who once had a short-lived business making vegetarian sandwiches that he delivered by bike, realized he could make more money making and selling pesto and sauces made with fresh, natural products than he could playing rock and roll. “Like with music, I’ve always been passionate about food,” says Le Grand. “And like with writing music, when you make a recipe there must a rhythm in how it tastes and eats and digests.”

The problem back then, he notes, was that there was little demand for gourmet products like his. “We were a little ahead of our time (and) what we were doing was still pretty marginal.” Bossy puts it a different way: “Fifteen years ago we had a hard time giving our pesto away. People said it had too much basil.  But food trends have changed and now our yummy products are totally mainstream.”

Le Grand gives much of the credit for the company’s success to Bossy for taking over the administrative side of the business, together with being the primary caregiver for the couple’s three children. “I was creative, but I was losing the battle of management,” Le Grand writes on the company’s website. “Tatiana noticed and soon she was helping, doing some work from the house. It was the beginning of another relationship between us. As time went on she developed her skills and became a natural leader and superb organizer. I could be an artist.”

Success, however, didn’t come overnight. A decade ago, the company was still only making $15,000 a month in sales of pesto in both retail and foodservice (foodservice now accounts for about 10 per cent of company sales) in the Montreal area. But annual sales reached $1 million last year, when the decision was made to invest in a new facility that could support increased production for an expanding line of products and markets.

Though the move and the subsequent transition period proved challenging – Le Grant says they “went from lacking space to suddenly being shut down for 10 days and then having to start up production again in this vast new space – the couple are hopeful that they can ramp up production in the coming months to meet projected demand. “Our goal now is $10 million in sales in two or three years,” says Bossy.

What increased production and sales won’t do, the couple insist, is change their approach to making fresh sauce products. “I’m not a chef, I’m a cook,” says Le Grand. “I try to replicate in the plant what I do in the kitchen, which is try and make healthy, tasty foods that are also vibrant and beautiful.”