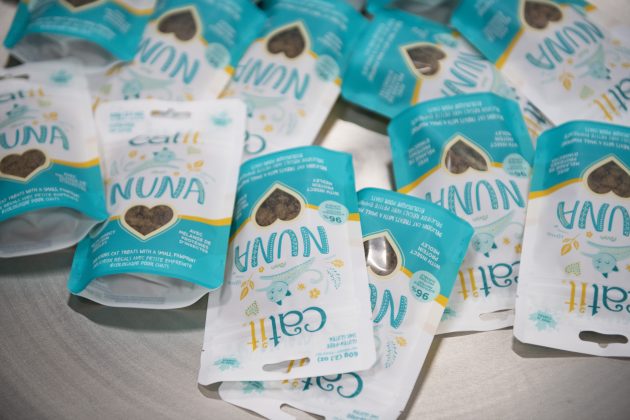 The Nuna line of cat food is the first in North America to be made with insect protein. All photos courtesy Catit

Montreal pet supply scion Rolf Hagen Jr. says he’s satisfied with the modest retail sales posted by his family-owned firm’s new Nuna line of cat food, the first in North America to be made with insect protein.
However, as president and CEO of the Hagen Group, the world’s largest private multinational maker and distributor of pet products, he is electrified by the market potential of the novel product.

Availability
The two-flavour Nuna line is part of the Hagen Group’s Catit brand. Made from a mix of insect, yeast and meat protein—chicken or fish—the dry kibble went on sale both online and at retail locations across Canada in January, 2021. It is also available in the U.S., but only via the Catit.com website. 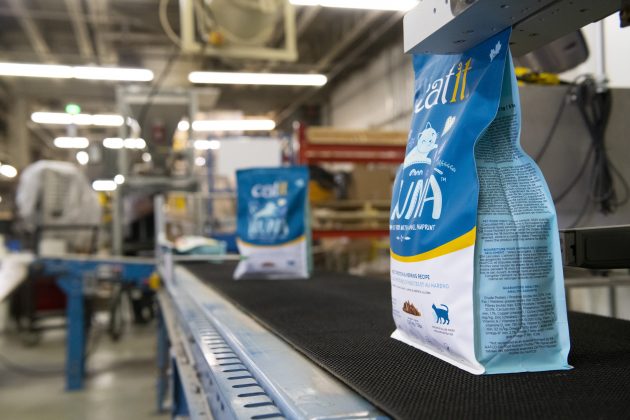 The Nuna line is made from a mix of insect, yeast and meat protein. Currently it is available in two flavours.

The line is also now being launched through Hagen’s extensive network of pet retail companies in Europe and the United Kingdom. A container was also shipped to Korea in April, the start of what Hagen hopes will be a lucrative foray into the Asian market, where Catit is already a top brand, thanks to its many lines of quality cat products including wet food, interactive toys, drinking fountains and furniture.

“Our partners in China are very excited,” said Hagen. “The cat market in China is looking for high-end products like this and we’re already one of the top brands there, as well as in Japan. They believe there is a niche for a very educated and quality product like ours.” 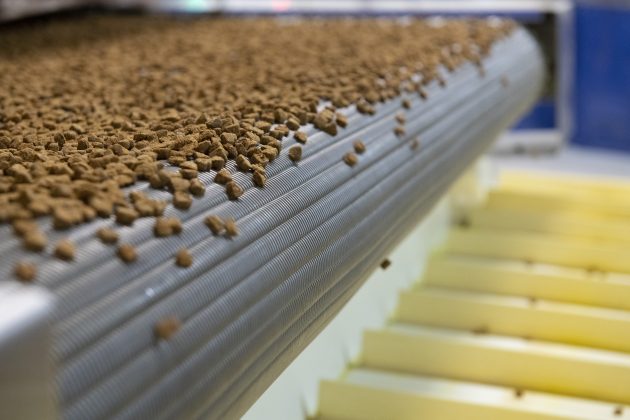 Floured larvae
Developed over the past few years at Hagen’s 270,000-sf facility in the west-end Montreal neighbourhood of Saint-Laurent, the Nuna line uses the floured larvae of black soldier flies, the same animal protein alternative being used by Nestlé’s Purina to make their new Beyond Protein dry dog food line in Europe. Catit also uses the same ingredient to make Bug Bites fish food under its Fluval brand.

According to Hagen food scientist Grégoire Guot, the project’s goal was to use the nutrient-rich larvae as an eco-friendly substitute for the more resource-intensive meat from farm-raised animals that are found in traditional cat food.

“Insects are still considered animals so making a vegan food was never the plan, but cats can’t survive on insects alone either,” said Guot.

All felines, he noted, from the world’s 500 million house cats to the remaining 3900 tigers in the wild, are obligate carnivores, meaning they rely on meat to survive because their bodies can’t digest plants properly. 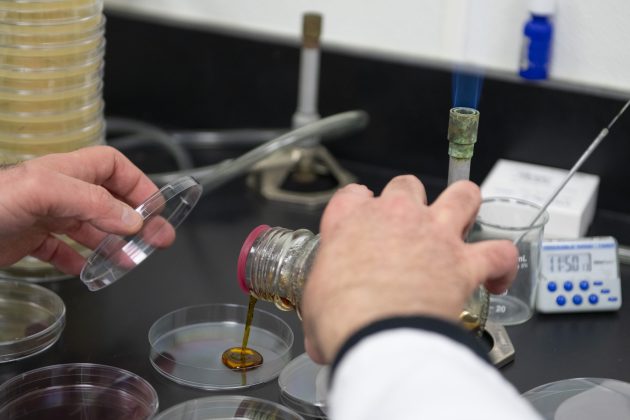 It took a year of taste-testing by different panels of cats to find the right blend of protein and flavours for the new Nuna line.

Testing recipes
Guot said the challenge facing Hagen was to find a balanced formula that was both nutritious and tasty to cats.

“People think cats are finicky but they’re not that difficult,” he said. “They just like to eat what they know, and there is a genetic aspect to it: cats tend to love what their mothers ate.”

Guot said it took a year of taste testing by different panel of cats (both internally using pets of Hagen employees and externally employing professional cat tasting panels in Ontario) to find the right blend of protein and flavours for the new Nuna line.

“We tested a few different recipes,” Guot said about the panels, which typically involve 40 cats that are kept for two days in a common area with free access to automatic feeders. The amounts of food they eat and their reactions and behaviours are recorded for statistical analysis to help measure acceptability, palatability and digestibility.

Once the two Nuna recipes were approved, focus switched to production. Unlike airtight wet cat food lines like Catit’s Divine Shreds and Fish or Chicken Dinner, which are cooked in sealed cans or pouches to protect them from oxidation and contaminants, dry food kibble like Catit’s Gold Fern, which is 95 per cent meat and green-lipped mussel, need to be created out of ingredients that can provide 12 to 18 months of shelf life.

Processing
Supplied by various American and Canadian insect producers, including Maple Ridge, B.C.’s Enterra Feed and some small Quebec firms, Hagen began processing whole black soldier fly larvae by first running them through a mechanical press to extract the oil, which is then treated to remove impurities and stabilized using a natural antioxidant blend.

“The larvae are essentially peanuts,” said Beno<8>î<8>t Choquette, an agronomist who has worked 23 years for Hagen, where he is in-charge of laboratory work and regulatory affairs. “They are high in calcium and protein and there are trace vitamins and minerals and some amino acids. However, we need to supplement it with protein from yeast (an ingredient used for decades in the pet food industry) and meat protein (chicken or fish) to complement the nutrition profile.”

After going through a Hammer mill, the insect meal and additives are reduced to a flour mix that is conveyed to a computer-controlled, twin-screw extruder and cooked at low temperatures (to prevent nutrient degradation) to form dry, pellet-size kibbles.

After extrusion, the preservative-free kibbles are sent to a single pass dryer (to add shelf life), sifted and enrobed in flavours. Once cooled, they are bagged in recyclable packaging—a first for Hagen—on one of the company’s eight fully and semi-automatic packaging lines.

Niche product
Though it is only a small addition to the Hagen Group’s 25-strong list of brand name pet products for aquatic species, birds, cats, dogs, reptiles and small animals, Rolf Hagen Jr. says the sustainability mindset behind the innovative Nuna line is now driving R&D in a company that was founded as a small seed brokerage in Montreal in 1955 by his late father, a young German immigrant who left his war-ravaged homeland for a new life in Canada.

“There are many benefits from using black soldier fly larvae, but they cost eight times more than soybean so they will remain a premium category product in terms of protein pricing,” said Hagen.

The Hagen Group, he added, “is not a prototypical pet food. We have an eclectic array of equipment (and) use a batch system of production that allows us to create targeted speciality runs.”

Still, Hagen is confident the insect pet food market will continue to grow, and he is ready to ramp up the Nuna line to large-scale production if and when demand warrants it.

“We birthed it (and) if it is successful commercially the goal would be to produce it in a traditional pet food factory,” he said. “We have partnerships with pet food makers that would make it happen.”