Manufacturers are meeting consumer demand for healthier, natural food and beverages by featuring real fruit and veggies in their products 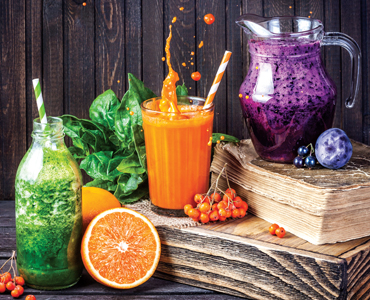 We’ve always been told to “eat your fruit and veggies,” but today, people are increasingly living by that mantra. The rise in sales of fresh produce in grocery stores shows that consumers are indeed choosing the real deal. In the latest 52-week period (to May 27, 2017), volume sales of fruit increased by four per cent compared to the previous year, and vegetable volume sales grew by three per cent, according to Nielsen Canada.

While the healthy food revolution is certainly playing out in the produce section, food and beverage processors don’t have to be left in the cold. Today, smart manufacturers are responding to consumer demand by featuring real fruit and veggies in a wide and often innovative range of applications.

“For most Canadians, eating healthy is a vital part of their lives, but when you consider that 64 per cent of them find eating right a challenge, anything that the CPG industry can do to lighten that burden will be a welcomed aid,” says Isabel Morales, consumer insights manager at Nielsen Canada. “Over half of Canadians (55 per cent) agree that eating fruits and vegetables is the number-one factor in a healthy diet, so incorporating more of them – in any form – is a way to improve the quality of a diet.”

Organic Slammers is one brand that’s packaging up the goodness of real fruit and vegetables. Made by Calgary-based Baby Gourmet, Organic Slammers are a 100-per-cent organic, drinkable fruit and veggie “superfood snack.” The varieties include the “Awesome” blend with bananas, blueberries, strawberries, beets, acai berries and amaranth; and the “Chill’n” blend with bananas, blueberries, butternut squash, Greek yogurt and yumberry.

Organic Slammers were created four years ago as an evolution of Baby Gourmets baby food lineup. “We needed to do something with a slightly different taste profile for school-age kids, but still in our core competency of sophisticated blends of fruits, vegetables, ancient grains and Greek yogurts that taste good,” says Michael Watt, CEO of Baby Gourmet Foods Inc. “Mom knows it’s a guilt-free, nutritious snack, but she also knows her kids are going to eat it and like it.”

In the yogurt category, where many products contain fruit flavourings, iögo has a back-to-basics  approach. All iögo products are made with real fruit and contain no artificial colours or flavours. “Staying focused on being real is a big part of what iögo does,” says Simon Small, vice-president of Marketing at Ultima Foods. “If we understand that people are adding more fruits and vegetables [to their diets], it’s our job to help bring that into the category.”

Since launching in 2012, iögo has continued to find new ways to do just that. In 2015, the brand launched a line of yogurt-based smoothies containing real fruit and vegetables. The latest addition – kiwi, pineapple, mango, spinach and kale – launched in January 2017. Last year, the brand’s kid-focused Nano line introduced a line of flavours that mix fruit with vegetables, including Peach-Carrot, Banana-Squash, and Blueberry-Beet.

On the more grownup side, Kellogg’s Special K launched its Nourish line of products in 2015, as it repositioned from a weight-management brand to a wellness brand. The line includes Apples, Raspberries & Almonds cereal, Mixed Berries Popped Granola with Quinoa, and Cranberries & Almonds Bars. This past January, two new granolas were introduced: Mixed Berries and Dark Chocolate Coconut.

“When developing Kellogg’s Special K Nourish, we listened to our consumers,” says Natasha Millar, Kellogg Canada’s senior Marketing director, Breakfast Cereal and Beverages. “We are giving them more of what they want in their foods, such as great taste and real, visible ingredients, including real fruit.”

Dole recently launched a fresh innovation for ready-to-eat fruit: Resealable Fruit Pouches. The line includes five flavours: Tropical Gold Pineapple Chunks, Mandarin Oranges and Sliced Pears, Fruit Cocktail with Cherries and Sliced Peaches. “We’re trying to bring innovation into the canned fruit category with new modern packaging,” says Peter Stewart, director of Business Development and Sales Strategy at Dole Foods of Canada. “Typically when you open a can of fruit, if you don’t use it all, you’ve got to decant that into another container. Our pouch has a re-sealable zipper closure, so you can leave the fruit inside the pouch. It’s a lot more convenient and contemporary for the user.”

In the snack category, New York-based Kind is ticking all the boxes of consumer needs with its first-ever fruit bar, Pressed by Kind. The fruit bar is made with only fruit and chia, or fruit and vegetables, with no sugar added and no preservatives. The product was first introduced in the U.S. in 2016 and is launching in Canada this fall. Three varieties will be available in Canada: Apple, Strawberry, Chia; Mango, Apple, Chia; and Pineapple Banana, Kale and Spinach.

“Our ingredient deck is really short and clean and it’s all recognizable ingredients so that people really know what they’re getting,” says Stacey Bowman, Kind’s director of Marketing – Canada. One Pressed by Kind fruit bar has two daily servings of fruit. “Similar to what we found in the U.S., Canadians are not getting the amount of recommended daily fruit in their diets,” says Bowman. “With people needing convenience and wanting to have healthy foods, but not being able to sit down and prepare fruit the way that they would like to, we wanted to make sure that we had a solution for that trend.”

Djordje Krstich is a Toronto-based entrepreneur who also sees a big opportunity in the marketplace for real fruit bars. The company he co-founded, Ipanema Valley, imports 100-per-cent banana brownies from Brazil. During the cooking process, bananas are put in high-pressure cooking kettles where vapor pressure concentrates the bananas by as much as 80 per cent. “In doing so, it turns into this fudgey, dark mass that you see there on the store shelves,” says Krstich. “It’s born from a marriage of Mother Nature coming together with food science to produce something very different, unique and delicious. Essentially, you’re eating a banana in a way that you’ve never eaten before.”

Rather than a “made with real fruit” claim, the packaging features the message “100 million fruit cells pressed together.” The reasoning for that is “it’s a verbal hammer,” says Krstich. “It’s a way to say, yes it is a fruit snack, but it’s a different one. It’s more of an experience. There are thousands of 100-per-cent fruit snacks and it’s just going to be commonplace. [Our approach] is going to really make an impact for the customer.” Ipanema Valley also sells three other banana brownies accented with either pineapple, guava or fig.

Another banana product on the market is Oh! Naturals banana chips, made from real, ripe bananas. The bananas are vacuum fried at a low temperature, which locks in the flavour of the banana and produces a chip that has lower fat than other banana chips on the market, says Rhonda Goldberg, president of Calgary-based Oh! Naturals Flavoured Snacks. “Consumers want fast, healthier-for-you snacks and our products [deliver] because of our cooking process. Our products are also vegan, and that’s a huge category that’s also on the growth spectrum.”

In addition to health messaging, the packaging features the words “real bananas.” That’s an important distinction because a lot of manufacturers use pictures of fruit and vegetables on their packaging, but those items are not the first ingredient, says Goldberg. “If something is made with cornmeal as a first ingredient and [the packaging] has a picture of sweet potato, I don’t know if it should be showing the sweet potato,” she says. “It’s quite deceiving and nobody has time to read every single label.”

In some parts of the world, such as the U.K., manufacturers have to show the percentage of an ingredient if it is highlighted by the labelling or a picture on the package. Goldberg would like to see similar standards in Canada. “I think the government should be stepping in to say, ‘What percentage of your product is actually that ingredient in order to call it that on the bag?’” she says.

While consumers may not have time to read every label, they are more label-savvy today. “A health or attribute claim on its own is no longer enough to gain more product fans,” says Nielsen Canada’s Morales. “Consumers respond better to a genuine effort from companies which are constantly trying to improve themselves and take the time to build a name they can trust. Transparency is always a sure way to win consumers over.”

With consumers’ views on health and wellness continually evolving, Morales says the best approach to innovation is to keep on top of what consumers consider “healthy” and to understand purchase motivation. “We’re witnessing a back-to-basics trend in which Canadians prefer more natural ingredients with less artificial additives, so ingredient transparency is key when communicating benefits and attributes,” she says. “But consumers are not only looking to solve their healthy diet puzzle. In addition to health, they’re also looking for solutions that provide convenience. That’s a winning formula.”