Shellfish is riding a wave of popularity, as seafood brands appeal to consumers’ desire for health, convenience and flavour 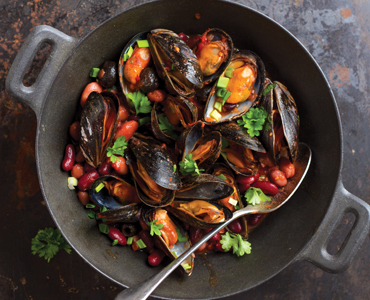 Shellfish isn’t for everyone. Even the co-founder of an oyster company, Sue Simcox, admits she wasn’t always a fan of the salty mollusks. But when the Vancouver Island resident began adding different flavours to her husband Terry’s smoked oysters, which he smoked in the couple’s backyard, she became a convert.

“We had all these smoked oysters in the fridge and I thought, ‘how am I going to learn to like these things, because obviously they’re not going anywhere,’” recalls Simcox, who runs West Coast Smokin’ Oysters in Campbell River, B.C. “So I started thinking, ‘people will eat anything if they like the flavour because they can eventually get used to the texture.’”

The couple’s hobby eventually grew into a commercial operation, with oysters sourced from the Fanny Bay Area and processed

Not only are bold, trendy flavours winning consumers over, people are also interested in oysters for their high iron, magnesium and omega content. On top of that, “there are a lot of people looking at the Paleo lifestyle, and oysters are one of the clean proteins they can eat,” says Simcox. “It makes people happy because they don’t have to just stick to chicken, beef and fish.”

It’s no wonder shellfish is riding a wave of popularity. Whether it’s oysters or mussels, scallops or shrimp, shellfish products tick all the boxes when it comes to what consumers are looking for in food – interesting flavours, convenient meal and snack options, and nutrition.

“Based on our research, one of the key things driving interest is the fact that consumers are constantly looking for healthy food choices,” says Ron Schindler, president of Toronto-based Clover Leaf Seafoods. “The nutrition benefits of our shellfish products are really outstanding. For example, Clover Leaf oysters and mussels are high in protein, very high in iron, low in saturated fat, free of trans fat, a good source omega-3s and are non-GMO and gluten-free, in BPA-free cans.”

Clover Leaf oyster products are the company’s most popular shellfish items, growing at 14 per cent with more than 50-per-cent share of market. Clover Leaf launched smoked oysters with spicy chili a couple of years ago and they now represent over 20 per cent of regular oysters sales, says Schindler. The oysters are naturally hardwood smoked and are packed with a chili in sunflower and chili oil. “They’re a great option for consumers to enjoy on their own, as appetizers or in recipes for entertaining,” says Schindler. “Many people eat oysters right out of the can, and interestingly, consumption is higher for men than women.”

Clearwater Seafoods’ Nova Scotia Prime Lobster is another example of an easy-to-prepare shellfish product. Through a high-pressure extraction process, raw lobster meat is released from its shell and frozen, locking in the flavour. The product can be prepared in a variety of applications, without the hassle of cooking and shelling live lobster, says Hanus.

Domenic Porporo, owner of Toronto-based seafood importer/distributor Dom International, believes there’s a misconception that seafood is difficult to prepare at home. “I think people in general are kind of scared of cooking seafood and they really don’t know what to do,” he says. “Mussels are actually one of the easier things – you just empty the bag, throw the mussels in a pot, add some vegetables and steam them.”

Dom International sells a variety of fresh and frozen organic seafood including salmon, shrimp and New Zealand greenshell mussels. Porporo says that while salmon products are the company’s biggest sellers, sales of mussels have tripled in the last year. “In general, we see demand increasing,” he says. “Consumers are looking more and more towards organic, and they see it as a better-quality product. I think the biggest trend is going towards organic and sustainable products.”

Hanus also expects that demand for sustainably sourced seafood products will grow as consumers take more interest in the long-term sustainability of the food they eat. “The demand for wild, sustainably sourced shellfish consistently outweighs supply,” she says. “Consumers often view wild-caught, sustainable seafood synonymously with things like healthy eating, organic and natural, and they are willing to pay a premium for it.”

As part of its sustainability program, Clover Leaf Seafoods recently launched a new traceability program designed to provide consumers with a high level of transparency around the company’s sourcing and production processes. With the “Trace my Catch” program, every Clover Leaf tuna and salmon product features a unique code that, when entered online at CloverLeaf.ca, provides detailed information on the product, including species, fishing method, ocean of catch, vessel name, fishing trip dates and the location of the processor. Trace My Catch collects information from more than 600 vessels in four oceans, and covers 80 per cent of Clover Leaf products, including cans, pouches and cups. Clover Leaf is adding its shellfish products to the program next year.

While Clover Leaf has always had product codes on the packaging, since it’s required as part of government regulations, the information was not easily available to consumers. But the company decided to develop a user-friendly database because consumers “want to know where their food is coming from,” says Schindler.

Simcox agrees that people increasingly want to know where their food comes from. When the entrepreneur meets prospective customers at food shows, she focuses on telling them the oysters are locally sourced and come from a sustainable oyster farm on the coast. “I know it used to be the 100-mile diet, but people are just trying to eat local and sustainable foods,” says Simcox. “It’s about learning to love what’s in your local area and eating that.”