Consumers are having their cake and eating it too, as the dessert category continues to grow 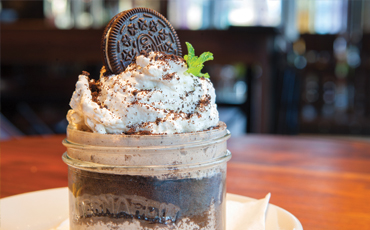 Despite the fact that health-conscious consumers are avid label readers on the hunt for healthy ingredients, they’re not willing to give up their desserts. In fact, whether looking for a snack or a finishing touch to a meal, the dessert category continues to show strong growth.

Technomic, Inc., in its 2013 The Canadian Dessert Consumer Trend Report, found that 38 per cent of consumers say they are eating dessert after a meal at least twice a week; and that dessert consumption has increased particularly among consumers age 18 to 24.

But what is it consumers really want from their dessert purchases these days? For one, a growing number are looking for better than

average quality and ingredients. Indulgence is becoming the buzzword of the day, balanced by a demand for smaller portion sizes. Nostalgia for traditional desserts and flavours holds strong appeal for older consumers, while younger ones are keen on adventurous new flavours. They also continue to look for all-natural ingredients, as well as added fibre and vitamins.

The quest for indulgence is trending upwards across the board, from cookies and pastries to ice cream and dairy desserts. But with that comes a demand for high-quality ingredients.

Danone Canada for one is banking on the new indulgence trend with the launch of its Danette dairy dessert. It’s a product that represents a new segment for the Boucherville, Que.-based company, says Franck Escudier, Innovation Marketing and Brand Management. The dessert made from 75-per-cent milk is packaged in four 100-g individual servings and comes in six flavours, three of which are chocolate based.

“Across Canada one of the things that came out in studies is that the indulgence segment is a reality,” Escudier says. “We found that two-thirds of Canadians treat themselves after a meal, and look for something that’s indulgent, but also perceived to be healthy.”

Ultima also has its eye on the indulgence segment with the launch of iögo Moment, says Diane Jubinville, director, Consumer and Public Relations at Ultima Foods in Longueil, Quebec. “The indulgence segment is the second most popular in terms of growth after Greek. In Europe that category is showing 15- to 28-per-cent growth,” she reports.

The new offering is its richest yet with eight-per-cent milk fat, all-natural ingredients (including four fruit bottom varieties) and added vitamins A and D. The product comes in single-size portions that weigh in at 140 calories each.

While indulgence may be top of mind, so is portion control, notes Michelle Tiang, Marketing manager, Retail/In-Store Bakery (North America) for The Original Cakerie in Vancouver. “People want to make sure they don’t over indulge, so we’re seeing a growth in smaller, bite-size and grab-and-go formats,” says Tiang. Consumers are also becoming more savvy, she adds. “They’re reading the ingredients to know what they’re eating and being careful about what they include in their diet. They’re looking for things like less calories, gluten free, or added protein or fibre. They want something that’s better than normal.”

Jubinville notes that while consumers continue to focus on natural sugars and vitamins, when it comes to desserts “they don’t just want to be told what they should be eating. They want to enjoy it.”

Flavours and textures are also a point of differentiation for consumers, says Jason Labahn, corporate chef of the dining franchise Browns Socialhouse in Vancouver. “They tend to love sweet, chewy and crunchy combinations, along with sweetness and acidity. Go to any Whole Foods store and look at how many chocolate bars there are with different infusions, including sea salt and chili.”

While chocolate, vanilla, caramel and strawberry continue to rule as the flavours of choice, Tiang points to up-and-coming trends like alcohol-based mock cocktail flavours, hot spice infusions (including ginger and chili), and sweet/salty combinations. In fact, a 2013 Datassential MenuTrends report shows that although chocolate remains America’s number-1 dessert flavour, the combination of buttery caramel with savoury sea salt has shown an 850-per-cent increase on U.S. menus from 2009 to 2013.

Popular ethnic flavours that are hitting mainstream include coconut — due largely to the rise in interest in coconut water — and mango, notes Tiang. Red velvet, a U.S. mainstay for years, has also been making inroads in Canada.

Atul Palghadmal, head pastry chef for Jelly Modern Donuts in Toronto, says the company’s success in its cafés and the retail market has been due to its commitment to unique flavour combinations and sourcing local ingredients. “Consumers are much more conscious about what they’re eating,” he agrees. Palghadmal says that the business’ biggest sellers these days are salted caramel and maple bacon, followed by classic jelly and Callebaut chocolate. Peanut butter also ranks as a perennial favourite.

Palghadmal notes that different demographics gravitate towards different flavours and ingredients when they choose to indulge. “Older people look towards the classics like vanilla or lemon curd. They don’t tend to be that experimental. Rather they prefer flavours they know and can relate to.” On the other hand, younger consumers go for the sweeter side, often buying treats that contain caramel and extra icing. “People in between those age groups are the ones who like to experiment with something different,” he says.

Gluten-free desserts are also showing no signs of slowing down. “Mass retailers are adding more gluten free in their sets,” says Tiang, adding that the company has just launched its first branded gluten-free cake offering in the U.S. “It used to be only specialty stores that carried them. But with all the hype, even Wal-Mart and Target have gluten-free sections now. If they’re not at a big price premium people will continue to buy them.”

While still a smaller segment of the market, unique hybrid treats are also making headway with consumers, as witnessed by the upsurge in interest in the cronut (the croissant and doughnut combo) last year.

Perhaps one of the most prevalent trends is the move to modern reinventions and interpretations of classic desserts consumers grew up with. A popular inspiration for many of Jelly Modern’s offerings are classic treats, from Skor bars and S’mores to Nanaimo bars and date squares, Palghadmal says. And at Browns Socialhouse Labahn’s recent mason-jar dessert creations, including the new “Oreo Cookie Jar” that combines classic cookies and cheesecake ingredients, have been an increasingly popular take-home item.

While trends matter, Tiang notes that in some of the more adventurous cases, shelf life may be limited. But there’s one thing that holds true over time: consumers always fall back to traditional favourites. “At the end of the day, people still try to go back to what comforts them.”