Getting cozy with chicken noodle soup

Are canned chicken noodle soups equally pleasing, or should any be left out in the cold? 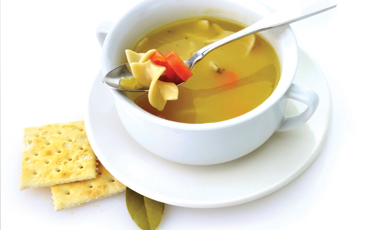 As the cruel Canadian winter fast approaches (group sigh), we can all look forward to donning our toques, putting on the snow tires, and stocking our pantries with wintertime classics such as chicken noodle soup. Chicken noodle soup is a quintessential comfort food that is also popularly known as a natural therapy for common ailments such as colds and flu. It is a staple in many Canadian homes and is the ultimate best medicine when made from scratch – but that’s not always an option in hectic family life.

So in preparation for the upcoming cold and flu season, we ran a blind taste test of canned chicken noodle soups to explore whether they are all equally pleasing, or if any should be left out in the cold.

We asked 50 females from the Greater Toronto Area to taste test five brands of canned chicken noodle soup. We chose brands with similar selling features focusing on regular full-fat, full-flavour varieties. Each participant evaluated four ounces of each sample, labelled with a three-digit code and presented in varied order.

But before we let the soup slurping begin, we asked a few questions about purchase motivations in this category. Most (82 per cent) said they purchase chicken noodle soup over other soup varieties because they simply like the taste better than other soups. And when it comes to brand choice, trust in the brand was the number-one consideration, followed closely by price, and taste they like best.

Two of the five brands performed fairly well, two were not so bad, and one was left out in the cold. But even the top performers in this category failed to really impress and left almost half of our respondents on the fence about whether they would actually ever buy them.

Our front-runners were most likely to be described as hearty, wholesome and homemade. One had the top scores for flavour of the broth, while the other winning soup scored best for its combination of ingredients. Both attributes were found to be strong drivers of overall liking in the category.

The brand with the least appeal truly stood apart from the pack, with significantly lower scores than all the other soups on many key performance measures. Most described this product as watery and bland. It was very weak in flavour and was lacking in the amount of chicken – in fact, the chicken pieces were hardly noticeable at all.

All the soups had the right amount of broth and noodles, but everyone was left wanting more chicken and vegetables. The texture of the vegetables was also too soft in all cases, but trying to maintain the slightly snappy bite of vegetables such as carrots is a notorious challenge for canned soup and vegetable processors.

Snuggling up to sodium

Many soups are notable for their high sodium content. In fact, most of our soup tasters admitted to sometimes or always reading nutritional labels when they buy canned soup, with sodium content as their main interest. Whether homemade or processed, salt has a big part to play in the flavour profile of soups such as chicken noodle, and food manufacturers have long struggled with the quandary of reducing sodium levels for healthier labels, without giving up the flavour character that we have come to know and love.

Four of the five soups we chose to test fell within a similarly high sodium range of 560 to 650 mg per 250 mL. However, one brand stood apart with mammoth sodium delivery, and although it was accurately perceived as the saltiest of the bunch (many thought it was “too salty”), it was also the top scoring product on overall flavour. But what price would be paid for this flavour prize? Our “label-reading” consumers would likely take a pass on this brand.

Everyone has their own preferences for foods that provide comfort or remedy, and while most of these traditions began on the stoves or in the ovens of our ancestors, nowadays the ritual sometimes begins with a can opener. Consumers are accepting of the trade-offs of fast and convenient food choices and are well aware that true homemade quality can rarely be purchased on a grocery store shelf…and certainly not without a premium bounty.

It may be a tall order for canned chicken noodle soups to replicate homemade quality, but “comfort in a can” is best achieved with a flavourful, salty broth, with some consideration not to overdo the sodium and alienate the vigilant label-reading consumer segment. It should also have enough of the chief premium ingredients, in this case chicken and vegetables, to be a reasonable replication of the hearty homemade version.

Contract Testing Inc. is an industry leader in sensory evaluation and consumer product testing. With 30 years in business, we are innovators in testing with consumers across all major food, beverage and household and personal care categories.