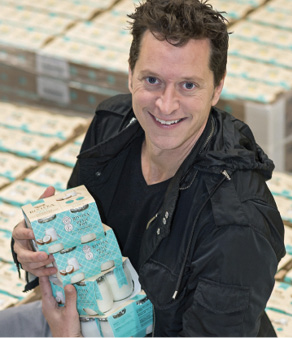 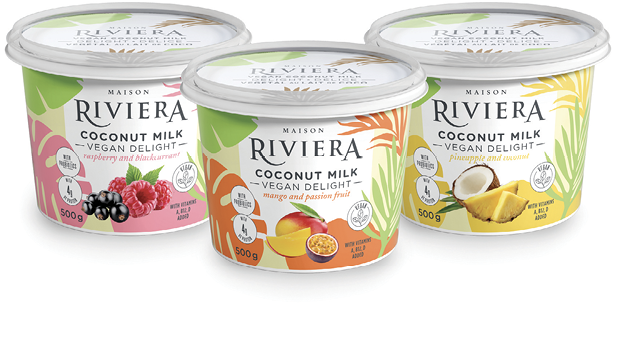 Most travellers to France indulge in the country’s fabled array of wines.

But for Martin Valiquette and Nicolas David — respectively chief executive officer and director of quality, research and development at Quebec dairy manufacturer Maison Riviera — a trip to the Hexagon is a chance to sample the latest French dairy products.

A year ago, during one of their occasional visits to the headquarters of Alsace Lait, a regional milk coop near Strasbourg and a minority owner in Maison Riviera, Valiquette and David bought several new yogurt products at a local supermarket.

One of them — a yogurt made from fermented coconut milk — immediately caught their attention.

“When we tried it we both said, ‘Wow, this is really good,’” recalls Valiquette. “It inspired us to do a product like that here.”

Since February, three flavours of the dairy-free items — pineapple and coconut, mango and passion fruit and raspberry and blackcurrant — have been available in 500-gram tubs in specialty grocery stores throughout Ontario, British Columbia and Alberta.

According to Valiquette, the new products flew off store shelves from the get-go. “We were shocked by consumer reaction,” he says from Maison Riviera’s administration and production facility in Sorel, Que., where 110 employees work. “The response was spectacular from the minute the product went out the door. The volume of sales were three times more than we estimated.”

Valiquette credited that commercial success to what he calls “an alignment of the stars.” They include the rise of popular movements like protection of animal welfare, environmental concerns over the impact that flatulating cows are having on global warming, increased consumer demand from vegans, vegetarians, flexitarians and people with lactose or gluten intolerances — even Health Canada’s new food guide, which recommends cutting milk and cheese almost entirely from diets and replacing them with legumes, among other things.

Valiquette also credits his travel partner David and his R&D team for developing the new product, which contains an exotic blend of coconut, cocoa, pea and fava beans (for protein) plus vitamins A, B12, D and calcium.

“The hard part was finding the right balance,” he says. “With milk, we know the parameters. But this was a whole new ball game, developing a plant-based protein item that tasted great and had a yogurt-like texture.”

He adds that by successfully developing a product that offers vegans a nutritionally complete dairy alternative, Maison Riviera finds itself in the forefront of a fast-growing North American market.

A 2018 study by Dalhousie University, for example, suggested that more than seven per cent of Canadians are vegetarians and more than two per cent are vegans.

The study also estimated that vegan alternatives to dairy products would account for 40 per cent of segment market share in North America in 2019, up from 25 per cent in 2016.

Valiquette says his company is hoping to follow up on the success of Vegan Delight with a second phase: the launch in May of a 650-gram tub of plain, unsweetened coconut milk yogurt. “It’s a top-SKU product for true vegans,” he adds. “The demand is there.”

In order to differentiate the new items from Maison Riviera’s many award-winning lines of dairy products, including desserts, cheeses, creams, butters and yogurts, which come in tiffany blue packaging, the new product line tubs feature tropical motifs with green leaves and pink flowers.

Vegan yogurt is just the latest in a series of trendsetting innovations and products that the family-owned Quebec food company has developed over many decades.

The company’s roots date back to 1920 — a date inculcated in its corporate website address — when Sorel-Tracy dairy producer Napoleon Chalifoux started selling milk locally. It wasn’t until 1959, however, that company, Laiterie Chalifoux (or Chalifoux Dairy) began making its own cheese brand, Riviera Cheddar.

By the 1970s, Laiterie Chalifoux was buying and processing some four million litres of milk a year from dairy farmers across Central Quebec.

In the 1990s and 2000s, the company modernized its production facilities and introduced European ultrafiltration technology that, among other things, helped to widen its product lines to include lactose-free cheeses under the Maison Riviera brand name.

Inspired by refined French dairy products and with an eye to consumer demand for more healthy foods made with quality ingredients, the company had a big commercial hit in 2015 with its Petit Pot line of high-end, set-style and organic yogurts.

Developed as a joint venture with minority partner Alsace Lait, the small glass pots the yogurt came in became the object of an overnight collectibles craze that generated both news headlines and store sales nationwide.

“With the new import quotas coming in for cheese and dairy, we wanted to launch some new products that would be hard to import or duplicate,” Valiquette, who joined the company as marketing manager a year earlier after working nearly two decades for yogurt maker Liberté, said at the time. “We never imagined any of this. We invested very little in marketing for the launch. We just sent out samples, got some press, and things went crazy.”

Demand for the bottles’ colourful lids in particular even led to the creation of a small retail side business.

Since then, several of the company’s food products — including its plain French-style fresh cheese, non-GMO set-style yogurts, chocolate and caramel parfait, and lactose-free, sugar-reduced Greek yogurts — have won top Canadian and Quebec awards for innovation and processing. In addition to top-quality milk, the products use high-end fruits that reduce the need for added sugar, adding to both their health-conscious appeal and the company’s sophisticated marketing and expertise.

The company has also won awards for its stylish website (riviera1920.com), which features slow-motion video footage of a young woman in outdoor settings under the theme, “When dreams meet know-how.”

For Valiquette, the addition of the new Vegan Delight line, which necessitated a $500,000 investment at the Sorel plant to ensure the segregation of coconut milk from dairy milk, which is considered an allergen, is consistent with Maison Riviera’s innovative mindset and culture.

“We are always on the lookout for new products and ideas, especially from France,” he says. “After all, our motto is ‘Bringing Europe to our tables.’”