Pasta and rice have moved from boring to bold, thanks to fresh innovations from manufacturers 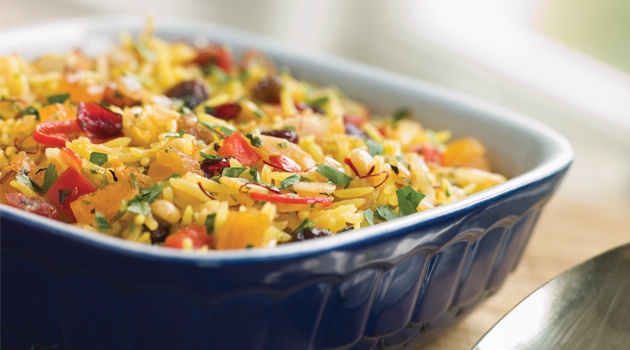 Pasta and rice have long been staples in Canadian households, but until a few years ago, they were mainly of the white variety. Today, manufacturers are livening up the category with products ranging from high-fibre pasta to colourful rice from around the world.

While fad diets have eaten into sales in the past, rice and pasta are enjoying healthy growth. In 2013, sales of dried pasta in Canada increased by four per cent to $672 million, while chilled and fresh pasta increased by six per cent to $146 million, according to research firm Euromonitor International. Meanwhile, sales of rice rose by five per cent to $288 million.

Growth in the rice category is due to increased demand for wholesome, nourishing side dishes, as well as the rising interest in Asian cuisine, reports Euromonitor International. “There have been a lot of developments, including flavoured rice, wild rice and organic rice, so there’s definitely demand from mainstream consumers,” says Svetlana Uduslivaia, senior research analyst at Euromonitor International in Chicago. “And with the Asian population growing in Canada, that provides additional demand for rice at the retail level.”

Lundberg Family Farms, a rice grower in Richvale, Calif., has seen rising consumer interest in unique varieties of rice, including red and black. “We’ve had black rice for quite a few years, but consumers are recognizing it more and more and it’s beginning to go into the mainstream,” says Todd Kluger, vice-president of Marketing at Lundberg Family Farms. Last year, the company launched a new type of black rice it calls Black Pearl and a red rice called Burgundy Red.

The company also expanded into the boxed entrée category with a line of organic whole-grain rice entrées and seasoning mixes. The 11 entrées, which come in flavours such as Mild Curry Lentils & Rice and Spanish Rice, have simple, high-quality ingredients.

“People are looking for real ingredients,” says Kluger. “So instead of flipping over the package and seeing ingredients they can’t pronounce or a bunch of flavour enhancers, if it’s Spanish rice, for instance, they want to see tomatoes and peppers.” Kluger adds that the company is also removing flavour enhancers such as yeast extract from its products and developing products without them.

While consumers enjoy experimenting with new flavours and types of rice, they still want convenience, notes Uduslivaia. To that end, Lundberg launched a line of precooked Heat & Eat rice bowls for consumers who are looking for high-quality rice that cooks in minutes. Minute Rice’s new Ready to Serve Cups, which come in varieties such as Vegetable Medley and Whole Grain Brown Rice, cook in the microwave in just one minute. And Knorr has re-launched Rice Sides, which cook in half the time at just seven minutes.

On the pasta front, the Italian staple enjoys high household penetration in Canada. “Pasta is still considered to be a comfortable, relatively cheap food that you can easily make at home,” says Uduslivaia. While white pasta still makes up the bulk of sales, there’s a shift towards varieties like whole wheat, high-fibre pasta, she adds. “White pasta is still the biggest seller because [whole-wheat] pasta does have a slightly different texture and taste, so it’s not to everybody’s liking.”

To address that issue, some manufacturers are enriching white pasta with fibre. In 2012, for example, Toronto-based Italpasta launched a line of high-fibre white pasta called Total Pasta. The products are made with 100-per-cent Canadian durum wheat and fibre from inulin. The line comes in four shapes: spaghetti, spaghettini, penne rigate and elbows.

When it comes to product innovation, Italpasta has a sharp focus on health and wellness in all categories. “We really feel that consumers are looking for pasta to deliver some nutritional value and [functional] benefit,” says Frank DeMichino, COO of Italpasta. The company is now developing what it calls a “super pasta” that’s high in fibre, protein and omega. The ingredients might include inulin or oat hull bran for the fibre, chickpeas and lentils for the protein, and flax seeds for the omegas. “We can deliver a much more powerful product by having all these ingredients with it,” says DeMichino, adding that consumers, schools and health institutions are all seeking these types of products.

There’s also one thing many consumers are avoiding: gluten. Even if they don’t have gluten intolerance, many Canadians are opting for gluten-free diets for perceived health benefits. While it may just be the current health craze, pasta manufacturers have nonetheless responded to the demand.

Italpasta has a line of gluten-free pasta made with corn and rice, and it’s currently experimenting with adding quinoa and buckwheat as well. “A lot of people think gluten-free is just a fad, but I’m not so sure,” says DeMichino. “I think there is some long-term sustainability only because there is a real challenge with people who have celiac disease. So that definitely is not going to go away.”

Griss Pasta also has a line of gluten-free pasta, but the company is seeing a bit of pullback on sales, says Enzo D’Adamo, sales director at Griss Pasta in Longueil, Que. “I think [the gluten-free trend] is on the downside,” he says. “I don’t think it’s something that’s going to stick around for a long time.”

Vegetables like spinach continue to work their way into dried pasta. “This is a little bit of a marketing gimmick, but nonetheless there was some growth in demand for vegetable pasta,” says Euromonitor’s Uduslivaia. “There is an attempt to position this as a way to increase your vegetable intake. Frankly, I don’t think a lot of people will buy it in the long term.”

On the fresh pasta side, Ebro Foods-owned Olivieri has the most extensive line of fresh pasta and enjoys the widest distribution in Canada, according to Euromonitor. However, local manufacturers such as Toronto-based Queen’s Pasta and Boisbriand, Que.-based O Solo Mio continue to enter the category, positioning their products as preservative-free and all natural.

“The demand for fresh pasta was always quite healthy because it’s easy to prepare, but it’s also seen as fresher [than dried pasta],” says Uduslivaia. “Just like with many other products, there is the perception that fresher means tastier or better quality, so there is always going to be demand.”

Canadians will continue to have a steady appetite for rice and pasta. Here’s a look at Euromonitor International’s forecast for the 2013-to-2018 period:

•Pasta is forecast to increase by a two-per-cent compound annual growth rate (CAGR).

•Chilled/fresh pasta in projected to increase by a four-per-cent CAGR.

•Dried pasta is projected to increase by a CAGR of two per cent.