The St-Méthode Bakery continues to shape the Quebec baking market 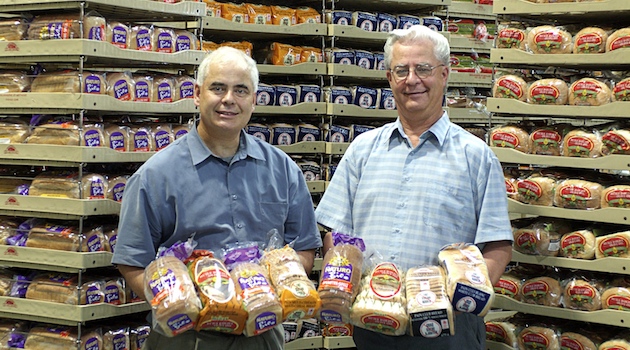 Benoît Faucher likes to joke that he and his five brothers were born between batches of bread in their family’s bakery. “It couldn’t have been any other way,” says Faucher, president and last family owner of St-Méthode Bakery, Quebec’s biggest and oldest home-grown bread company. “Mom and dad were always making bread.”

Renowned across Quebec for its four bread lines – La Récolte de St-Méthode, No Fat No Sugar Added, Campagnolo, and Naturo-Bio – the company churns out some 60,000 loaves a day at its facility, six days a week, and delivers them fresh in its fleet of trucks that run 80 routes to six distribution centres and hundreds of food stores stretching from Montreal to the Gaspe Peninsula.

Though nowhere near the size as industry giants Weston and Canada Bread, St. Méthode is the largest bread company owned and operated in Quebec, and the largest provincial bakery in Canada. It is also now the largest employer in Quebec’s Amiante region, which is best known for the mining of now-discredited asbestos in and around the regional hub of Thetford Mines.

According to Faucher, the company reached another major milestone earlier this year, when a report it commissioned from Neilsen found that, for the first time in its history, St. Méthode Bakery was Quebec’s number-1 seller of healthy breads, a category he says represents roughly a third of the entire $350-million bread market in la belle province. “We’re very proud of our longevity and our success,” says Faucher, the second youngest of six brothers, and one of five who became bakers and worked their entire lives in the family business.

Together with a silent partner, the 55-year-old recently purchased the shares of three of his brothers – Robert, André and Bertrand – and is now the last Faucher to be an owner in the company. “We still have our traditional products that people love,” he says. “And we’ve stayed with the times by innovating and introducing new products that have been very successful.”

To be sure, the St. Méthode bakery has come a long way from its decidedly humble origins.

It started in 1947, when Joseph Faucher and his wife, Mariette Robert, began making bread in a small shed behind their young family’s home in the heart of the village of St. Méthode. “Back then every village had its bread maker, and one of my mom’s brother-in-laws and a cousin were the bread makers in their villages,” says Faucher. “Dad was a licensed butter maker, but he and mom decided to give bread making a try.”

Equipped with a wood-burning oven and a small mixer, the Fauchers and one employee began making between 200 and 300 loaves of traditional white bread a day. They sliced and sold them to both villagers and farming families on nearby rural roads for 10 cents apiece. “They did really well from the get go,” says Faucher. “Within a few years dad was delivering and selling bread in neighbouring villages, so they had to build a bigger building with more equipment and a half-dozen employees.”

By the 1960s, the growing regional business added several new products, including baked beans, pâté, and pies. The Faucher boys also began working alongside their parents. Gaston, in particular, became the company’s master baker, with the other brothers working in everything from production and shipping to sales and research and development. “We all got rolled up in the family business,” quips Faucher, who started baking at age 12. “We never miss our daily bread (and) we make lots of dough.”

After taking over the company from their parents in 1975, the Faucher brothers initiated a major modernization and expansion of equipment and production facilities. In order to make room for a new production facility that more than doubled the size and capacity of their operation, they moved their family’s home to a vacant lot a few streets away. The oldest brother, Robert, still lives there today.

“Up to that point we were still doing things in a pretty artisanal way,” recalls Faucher. “But since then we’ve been a major league operation with state-of-the-art equipment and R&D.” He credits the company’s continued success to two major decisions he and his brothers took in the 1990s. One was to focus operations solely on making bread, and to stop the production of baked goods like cookies, cake and pies.

The other decision was to invest heavily in the development and production of healthier breads, which were launched in its no-fat, no-added-sugar product line, which is called Les Graines St. Méthode. “We saw the growth potential in healthy bread products (and) we were pioneers in the field,” adds Faucher. Another healthy product the company was the first to develop and introduce to Quebec a decade ago is the Campagnolo loaf, which is made with extra-virgin cold pressed olive oil.

In addition to helping the bakery make major inroads into Montreal, which is now its largest market, Faucher said the new healthy product lines have fuelled double-digit increases in annual sales since 2000, and now represent 55 per cent of total company sales. That success, he adds, has helped to offset the stagnation and even decline in sales in the highly competitive sliced-bread market. Even there, however, Faucher says the company’s traditional bread line – La récolte St. Méthode – continues to hold its own, with roughly 12 per cent market share.

Faucher credits that standing to both the quality and popularity of old fashioned products like pain de fesse (or bum bread, due to the hard-crust loaves’ buttocks-like shape), which are made by the 28 employees who work in a small bakery the company acquired several years ago in the tourist town of Magog, an hour’s drive east of St. Méthode.

However, it is in the main bakery in St. Méthode, where 125 people work in the bakery and another 175 are involved in distribution, sales and administration, where the company’s activities continue to be headquartered and focused. Among the employees are two of Faucher’s nephews, and he expects one of his sons, Jean-François, to join the family business soon.

That’s why Faucher is confident that the company will continue to be a major player in both Quebec’s bread industry and the region where it was founded. “Bread is at the heart of Québécois culture,” he notes. “People here know what they like and what they want, and they are very demanding. And that’s great, because it forces us to continue to strive to produce good tasting, quality products.”

2 Comments » for Delivering the daily bread