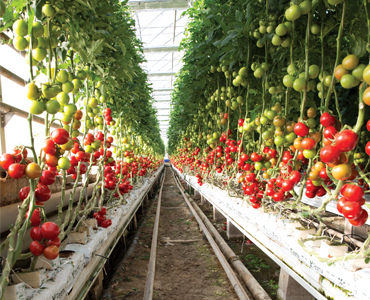 Leamington, Ont.-based Nature Fresh produces English cucumbers, mini-cucumbers, and a variety of tomatoes. The company also happens to be the largest single bell pepper producer in North America. All of these are grown not in normal farm fields, but in a 130-acre facility entirely encased in glass.

It is a state-of-the-art facility, but the advancements do not end there, says Keith Bradley, Nature Fresh’s IT manager. When it comes to every piece of produce that is picked, shipped and delivered, there are tracking mechanisms in place at all times.

In fact, the company’s logistics and handling processes are so sophisticated, he says, that “we basically know the row and the person that picked the produce. Our owner has always been an early adapter of technology and as a result, traceability has always been important. We realized that we had to be able to prove where things were, and through that we found that we can trace back volumes even better. As an example, it allows us to ask the question ‘This section of the greenhouse is not producing as much – why?’”

Jeff Gagnon, the firm’s compliance co-ordinator, says the intent is to track product from the greenhouse to the shelf. “We

want to follow everything all the way through,” he says. “The technological advancements that happened in a relatively short time are amazing. We have so much data and I am thrilled when our more junior people say, ‘I am going to start doing this and checking that trend.’ The data is being used, which is fantastic. We have a lot of disciplines in place to make sure we gather all the information.”

Among the advances is the so-called Internet of Things (IoT) movement, which is and will play a key role in every aspect of the food and beverage industry.

In a recent blog posted by Thingworx, a business unit of software company PTC, Linda Frembes, the firm’s content marketing group lead, wrote that the “potential for smart connected products, systems and operations when it comes to the food and beverage industry is mind-boggling. According to a 2015 survey, there was almost a 20-per-cent jump in the number of food and beverage companies with product sustainability goals compared to 2013. When you think about sustainable farming, waste reduction, and keeping up with feeding the world’s population, you don’t necessarily think about technology and the Internet of Things. But with IoT changing the landscape of virtually every industry and enterprise, the reality is that [it] can play a vital role in improving processes in the farm-to-fork cycle.”

David Zavitz, senior vice-president at Canada Cartage, says the key to it all from a logistics and handling perspective is that the cost of technology has come down drastically. As an example, he adds, where it used to be cost prohibitive to put telematics into tractors or to provide handheld devices to drivers, the “cost per unit has come down incredibly so. What that has meant to us is that we now have technology in just about our whole fleet whereas even three years ago, it would have been possible, but cost prohibitive. We see gains in many areas, but particularly from a customer service standpoint. If customers call for the status on shipments it is much easier for us to almost instantaneously tell them here is where your shipment is, here is what the ETA is. We can pull up screens that can see a truck in a particular area.”

As for the food and beverage sector’s wants and needs, Zavitz says the larger companies are looking to integrate both the delivery and logistics information tighter into their corporate enterprise resource planning or ERP systems. “Those are big ambitious undertakings though so it is challenging. It is not for the faint of heart to do that, but certainly there is the will to want to do that.”

Technology advances are also being used to reduce fuel consumption. For instance, it allows the idle time of trucks to be tracked, the speed they are being driven monitored and incidents of hard braking or hard acceleration recorded. “Fuel is such a huge expense for everybody so that is typically where you can get savings out of a system through better management of your assets and better management of the drivers,” explains Zavitz.

John McKenna, president of McKenna Logistics Centres, oversees an organization that handles both warehousing and logistics for a number of vertical industries, ranging from dry foods to consumer electronics. The control of information, particularly in the areas of food protection and quality, as well as on the warehouse floor, is critical, he says. “People in the supply chain want information. Collaboration between us as a warehouse operator and our customers is key. We store, distribute and ship to all the hard grocery and hard goods retailers in Canada. All that information has to flow quickly and correctly.”

As for other technology advances specific to the food and beverage industry, McKenna says the new Sobey’s distribution facility in Vaughan, Ont. has “gone into areas that I did not think were possible. Where we have pickers in our warehouse putting cartons onto pallets, shrink wrapping them and shipping, the new distribution centre is almost entirely hands free. “It costs hundreds of millions of dollars, but the productivity gains and labour cost savings realizes a very quick payback. There are not a lot of companies that can invest that kind of money.”

That said, McKenna’s goal is to go in a similar direction, but on a smaller scale for two reasons: one has to do with the cost of labour, while the other has to do with the availability of labour. “Looking at demographics,” he says, “in the future we are going to have a smaller resource base to draw upon.”