Chocolate and pretzel tie the knot

Chocolate confectionery sales continue to grow, and one popular trend is branching away from traditional chocolate formats 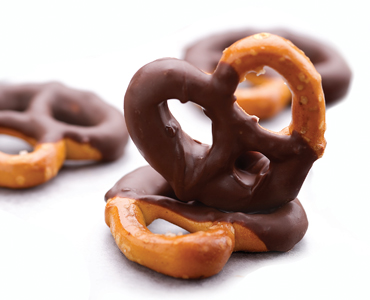 Chocolate confectionery sales continue to grow, and one popular trend is branching away from traditional chocolate formats. Confectioners are creating new clusters of yumminess, combining ingredients to create more complex flavour profiles and multi-textural experiences. One such product is the marriage of chocolate and pretzels.

Pretzels date back to early European monasteries, when the bread was folded to resemble the arms crossing the chest and was used as a reward for children learning their prayers — lending itself to the original Latin name, pretiala, meaning “little rewards.” The popularity of the twisted bread spread across Europe, and they were introduced to North America in the 1800s by German immigrants settling in Pennsylvania, which remains the pretzel-making capital of North America.

The pairing of pretzels and chocolate began in the mid-1500s in Hamburg, Germany when baker Herr Franz Joseph Leibniz joined forces with his chocolatier neighbour to combine their products. The chocolate-pretzel combo has gained popularity in the last few decades, so we recently took a closer look at four chocolate snack brands to see if the latest versions of the chocolate and pretzel marriage are equally harmonious.

We asked 100 females between the ages of 25 and 54 from the Greater Toronto Area, who were all regular consumers of chocolate snacks, to evaluate four different varieties of confectionery with chocolate and pretzels as key ingredients. Both dark and milk chocolate samples were represented, and each brand had its own unique combination of inclusions in its “cluster,” such as caramel, chips, sea salt or peanut butter. All four brands had similar nutritional declarations — these were all full-fat indulgences.

One of these decadent treats outperformed the others, with 60 per cent of participants saying they would be likely to purchase it — nearly twice as high as the other three brands. This brand boasted a significantly higher quality rating, and scored significantly higher on the hedonic attributes of overall liking, pretzel flavour, and the overall combination of ingredients. It also stood apart with superior textural properties: the inclusions had just the right amount of crunchiness, and the chocolate was the most likely to be described as creamy, smooth and melt in your mouth.

Despite this winning performance, the key performance measures for this cluster were not as high as expected for a product in the chocolate confectionery category, and there were aspects that didn’t have widespread appeal among our participants: the chocolate flavour was too weak; some thought there was too much peanut butter flavour; and although it had the best ratio of sweet and salty flavours, this treat was too sweet for more than a third of participants.

The other three brands did not meet the same standards as the first due to various issues with the combination of ingredients. For instance, the addition of caramel led to the awkward issue of sticky fingers — a more moderate use of caramel would have elevated the performance of this brand. The integration of sea salt in a couple of the cluster samples also proved to be problematic, particularly for one brand which was much too salty. The ratio of chocolate to other ingredients was also up for debate. One sample didn’t have enough of a pretzel presence, while another brand was much too thick and crunchy. Overall, the dark chocolate contenders did not perform as well as the milk chocolate.

Chocolate drizzle may be the latest sizzle in the chocolate confectionery world, as are more complex flavour mixtures and multi-textural mouthfuls. Brand innovation in this space lends itself to unique pairings like sweet with savoury, or creamy with crunchy. This trend of combining complex flavours and textural combinations means fusing multiple ingredients so they work together in balance, which can make for greater product development challenges.

Among our participants, one of the top reasons for purchasing one brand over the other was because “it’s a brand that they crave at the moment.” Clever confectioners are constantly looking to satiate those cravings. But like any relationship, this takes a lot of work, and may make the difference between creating a marriage made in heaven… or irreconcilable differences.