The chip category is anything but plain, as brands cater to consumers’ desire for adventurous flavours and natural ingredients 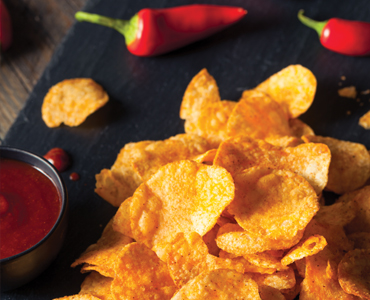 In the summer of 2015, Peter and Chris Neal were in the heart of barbecue country – Texas – talking about a distinctly Canadian dry-rub: Montreal steak spice. The co-founders of Toronto-based Neal Brothers Foods were meeting with executives at Whole Foods’ head office in Austin, arranging an exclusive deal that would see Neal Brothers’ kettle-style, non-GMO chips sold in more than 300 Whole Foods in the United States.

“We asked if there was [a flavour] they were looking for and one of the guys said, ‘I would love Montreal steak spice,” recalls Peter Neal. “I said, ‘Really? Is that a thing?’” So I called friends and family in the U.S., put something on Facebook and got an overwhelming response from people saying, ‘Yeah, we’ve got Montreal steak spice in our cabinet.’”

“We try to create flavours that are just a little bit different, or reflect more of a Canadiana taste and flavour profile,” says Neal.

“Consumers are being more adventurous with flavours, and I don’t know if people would have reached for a garam masala chip a few years ago.” Likely not. But today, the chip category is bursting with tasty innovation. While classic flavours will always have their place, chipmakers are catering to consumers’ appetite for bold and adventurous seasonings, as well as their desire for better-for-you options.

Laura Merritt, senior director of Marketing for Kettle Brand, says there’s growing preference for chip flavours that incorporate unique ingredients from around the world. “Consumers are more interested in ethnic flavours and cuisines than ever before,” she says. “Millennials especially are interested in stepping outside their comfort zone, and a majority of this group describes themselves as ‘adventurous eaters,’ which drives our creativity when it comes to new flavours.”

Kettle Brand, which is owned by salty snack maker Snyder’s-Lance, launched several new flavours over the past year, including Moscow Mule and Korean Barbeque. “[The flavours] were inspired by our favourite foodie hotspots near our home in Portland, Oregon,” says Merritt. Korean Barbeque has a smoky-sweet hoisin and garlic taste, while Moscow Mule has hints of lime juice with a ginger punch, just like the popular cocktail.

In May, Kettle Brand released another cocktail-inspired chip – the Classic Caesar, with tastes of tomato, brine and spices. The limited-time product was released in Canada in celebration of National Caesar Day, and the brand plans to bring it back this summer. “For good reason, the classic Caesar has continued to be a favourite cocktail in Canada, and we felt it was a fun opportunity to take the complexity of flavours in the drink and translate them to our chips,” says Merritt.

Indeed, while exciting flavours are hitting the right notes with consumers, better-for-you options are also in high demand. Emily Harris-Greene, vice-president of Marketing at Way Better Snacks, says millennials in particular “have high expectations for what their food will deliver, making sure that it’s simple, minimally processed and better for you, and also that it’s really exciting and fun to eat.”

“For a long time, the tortilla chip category was pretty much just corn, salt and oil, and that is still a very big part of it,” says Harris-Greene. “But there has been a huge proliferation around flavour and incorporating unique ingredients that you wouldn’t have seen in a corn chip 10 years ago.”

“We wanted something a little bit different for the snack food category,” says Kirk Homenick, president of Naturally Homegrown Foods. “We’ve seen a lot of trends with [chefs] and foodies experimenting with new vegetables and looking for new applications. We thought we could incorporate that into a snack and make it in a way that would be exciting and have a unique flavour profile for the consumer as well.”

Homenick says the term “innovate or die” is always bandied about in the business world, but it really applies to the snack food category. “You constantly have to give the consumer new options,” he says. “They’re going to respond well to your core staple options, but if you’re not innovating and giving them new alternatives, the category itself will stagnate. It’s such an impulse-driven category and innovation is so important.”

That’s especially true with today’s focus on healthier foods. “No doctor or nutritionist would prescribe a daily diet of potato chips or tortilla chips, but it’s like saying we shouldn’t drink either,” says Neal. “There’s always going to be a percentage of the population that is going to drink [alcohol] or eat chips. And if we can make chips healthier, and offer interesting, novel food ingredients and flavour profiles, then I think we can stay relevant with consumers.”