Les Canardises’ duck products are “out of this world” 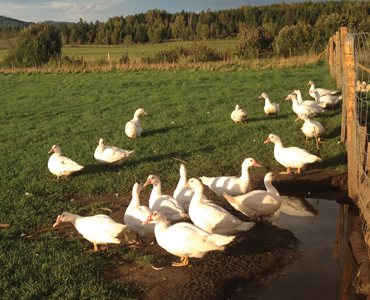 Pascal and Yolande Klein have enjoyed a lot of highs in the 14 years since they moved their family to Canada and founded a duck farm in rural Quebec. But they were over the moon when Canadian astronaut Chris Hadfield took their rillettes de canard (duck meat pâté) into orbit in 2012. “My wife couldn’t believe that a product made from her recipe in our little commercial kitchen here in the basement was in space,” recalls Klein.

Every year since 2003, the Kleins and their three now-adult children – Pierre, Camille and Paul – have raised thousands of meatier-variety mulard and Muscovy ducks on this 50-acre farm in the mountainside village of St-Ferréol-les-Neiges. They make some 20 food products from the meat of the ducks, which are raised outdoors and prepared and cooked on site.

Those products include fresh meat, foie gras and canned products like the rillettes de canard that the Canadian Space Agency

(CSA) added to a Christmas hamper that Hadfield took with him on Dec. 19, 2012 when he blasted off for a five-month mission as the first Canadian commander of the International Space Station.

In addition to direct sales to consumers who visit their farm and some high-end restaurants, the Kleins have built up a retail network of nearly 100 points of sale for their products across Quebec. Most of those locations are specialty food stores, but also included are a dozen independent Quebec IGA stores.

According to Pascal Klein, his family is now in the midst of a major expansion to try and meet growing demand for their products from both inside and outside Quebec, especially from the Napa Valley and other winery-rich, gastronomic-centric regions in California and elsewhere. At the heart of the expansion is a new two-storey building currently under construction on the farm, a stone’s throw from the current building that houses their operations. When finished this spring, the new building will permit more animal processing and feature a much larger, HAACP-certified commercial kitchen.

The construction also signals a generational shift in the company’s ownership, as the Kleins’ two oldest children – Pierre and Camille – will begin taking over the reins of the business from their parents.

“I’m really looking forward to it,” says Pierre, a 29-year-old father of two (soon to be three) young children who studied hotel management but has spent the past several years working in a mine in northern Quebec. He is in the process of moving his young family back to St-Ferréol-les-Neiges to take over the family business with his sister, who does marketing for the business while attending university in Montreal.

“We have some exciting plans and projects for the business,” says Pierre Klein. “But really it’s a question of continuing to develop and build on the success of our parents.”

That was little more than a pipe dream 20 years ago, when the Kleins first came to Quebec on vacation. “We really fell for the place,” recalls Pascal Klein, who worked as a prescription eyeglass technician in France, while Yolande worked for France’s central bank, the Banque de France. Both come from a rural region in France’s Alsace region, which is notably famous for geese and duck dishes.

According to Klein, he and his wife were eager to own their own business. But their home country’s infamously intrusive and slow bureaucracy and civil administration cemented their desire to move their young family across the Atlantic in pursuit of their dream. In 2000 they moved to Quebec for a year and put their kids in school while they took business courses and scouted for opportunities. “We were open to anything in agriculture,” recalls Klein. “Our only criteria were that we wanted to have a farm with lots of freedom, and that we didn’t lose money.”

After returning to France, the couple made a decision to buy a farm in St-Ferréol and open a duck operation. They moved here for good in 2002 (though Yolande returned that year to take a course on rearing ducks in southern France). The Kleins received their first shipment of ducks – 200 day-old ducklings that arrived in a big box from a Quebec supplier – in spring 2004. “It was really something going from paper and theory to handling live animals,” says Klein, laughing.

Disappointed by the quality of that first batch of ducks, the Kleins ordered and imported breeding adults of the heartier and more meaty mulard variety from generations-old duck farms in southern France. “Our goal was to raise ducks outdoors, but to do that we needed the old gene lines of ducks raised in those conditions,” explains Klein.

From the first batch of 500 adults they received, the Kleins began raising and processing larger numbers of mulard and Muscovy ducks every year. Born in a hatchery in Quebec City from eggs collected on the Klein’s farm, the birds arrive a day later and spend three weeks indoors. They are then moved outdoors for 18 weeks, when they reach a slaughter weight of around 3.5 kg. According to Klein, that is three times the size of wild ducks, and twice the weight – and better tasting – than Asian varieties, which are normally slaughtered after 10 weeks.

Unlike big industry players that raise vast numbers (as many as two million a year) of smaller Asian ducks, the Kleins processed only 6,000 animals in 2016. However the quality of their products have helped to make Les Canardises a big name in a growing Canadian niche food market. Their fresh duck meat currently fetches $38 per kg, which Klein says is “a little higher than the industry, because of our artisanal approach,” and is now about the same value as beef.

While Pascal Klein and his kids took care of the farming and processing (the Kleins notably force feed their ducks to make pâté, but all slaughtering is done at a federally certified facility an hour’s drive away), Yolande and an employee cooked and canned products according to Yolande’s homespun recipes. “My father took care of all the marketing and sales and paperwork too,” says Pierre Klein. “And my mom is a fantastic cook, the best I’ve ever seen.”

The Kleins began selling their products at the farmer’s market in Old Quebec, and still have a kiosk there. Their sales distribution has continued to grow, however, in step with their products’ growing renown. And the company received a major boost when Hadfield took their product into space. “We thought it was a joke,” recalls Klein about the CSA’s out-of-the-blue call asking for the product. “But it turned out to be a real thrill.”