We recently looked at four brands of salted butter to find out if they share similar product profiles, or whether any stand out as the better butter. 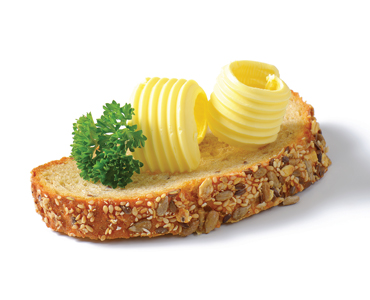 Some might characterize butter as having the ultimate supporting role as the illustrious sidekick of every meal. Butter is one of the most versatile staples and one of the simplest packaged commodities in the dairy case. And it’s still made with the same basic ingredients as it always has.

Butter dates back about 10,000 years, and as legend has it was discovered by accident among the hills of ancient Africa when a thirsty traveller went for a sip of milk from his sheepskin bag and found that it had curdled from the constant jostling of the journey. Romans were known to use butter for cosmetic and healing purposes, while in some ancient civilizations, milk’s “magical” transformation into butter gave it a mysterious, supernatural quality.

The bulk of butter consumed in Canada falls into the churned and salted category. Packaged butters vary in fat content, but all must contain at least 80-per-cent fat. European-style butters(generally marketed as premium in Canada) have 82- to 84-per-cent fat. Bakers will typically aim for higher butter fat content for a more pronounced flavour and flakier texture.

We recently looked at four brands of salted butter to find out if they share similar product profiles, or whether any stand out as

the better butter. We asked 50 females between the ages of 25 and 54 from the Greater Toronto Area to evaluate four brands of salted butter. Each 10-g sample of butter was served at room temperature with a half slice of white bread, and participants were asked to evaluate their appearance, flavour, texture and spreadability. Two brands were marketed as regular butter, while two carried more premium positioning.

Among our taste testers, close to 90 per cent claimed to be regular purchasers of both margarine and butter, with butter accounting for an average of 55 per cent of their cumulative last 10 purchases. When probed on their main reasons for buying butter over margarine, most said it was because it tastes better, or that it’s better for cooking and baking.

All four products looked the same, with no significant differences in appearance or shininess. There were a few perceivable differences in the flavour and textural profiles, and three of the four butter brands emerged with significantly higher liking scores, purchase intent, and better quality. These butters boasted similarly high scores for overall liking and naturalness of taste, and they all had the optimal strength of flavour, sweetness and creaminess. Between these three brands, two were practically identical, while one had a slightly darker colour, saltier flavour, and was slightly less spreadable.

One brand of butter stood apart in our test, with 40 per cent of all participants identifying it as “liked least.” It did not achieve most standard performance hurdles and scored significantly lower for overall liking, quality and purchase intent. Diagnostically, there were a few differences in the sensory profile of this butter which help to explain its underwhelming performance: it had the firmest texture (62 per cent said it was not easy to spread), it was perceived as not creamy or salty enough, and it was the most polarized on strength of overall flavour. Notably, this was also one of the premium-positioned brands.

Decisions in the dairy case are typically quick, and price is certainly a big driver of choice. Nearly half of our testers said they are not loyal to any specific butter brand, and most will purchase the brand on sale. Among the other half who admit to some degree of brand loyalty, most said it was a matter of taste. In fact, despite the perceived homogeneity of this product category, 75 per cent of participants said that some butter brands taste better than others.

There are growing niche opportunities to be found in the dairy case. Consumers now often have multiple butter brands in their repertoire, and while value may be a key purchase driver on one shopping excursion, the next one may be driven by a desire to splurge on a specialty item. Consumers may be willing to pay more for premium options — whether organic, cultured, churned, natural or whipped — but it may take a while for them to truly understand and articulate what actually makes a butter better.

For questions about this research, or how you can leverage consumer taste buds in your business, contact Dan Scholes at info@contracttesting.com or at (905) 456-0783.