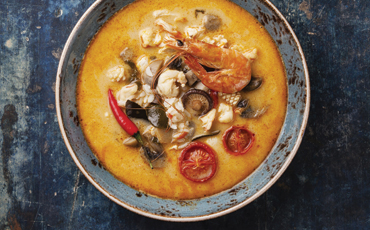 “Honey, can you pass the shichimi togarashi?”

As unfamiliar as it sounds, this request may soon be heard around dinner tables, as food manufacturers look to bring the next generation of global food products to market. In 2015, trend hunters are predicting a move towards bolder, more intense flavours, as consumers become more adventurous eaters.

Shichimi togarashi is just one of the international flavours expected to hit the sweet (and spicy) spot with consumers this year. The Japanese seasoning, a fiery and fragrant blend of seven flavours, made its way to the top of McCormick’s 2015 global Flavour Forecast. Also known as Japanese Seven Spice, a typical blend may contain chili pepper, orange peel, sesame seeds, ginger, poppy seeds, white pepper and nori.

“It’s a wonderful spice that you can use to season food [such as soups and noodle dishes] or marinade foods differently,” says Cloutier. For example, beef can be marinated with mirin, soy sauce, sake, sugar and shichimi togarashi to create a version of ‘yakitori,’ or grilled meat skewers, a popular street food and bar food in Japan.

The Japanese spice blend is part of a bigger movement toward “Asian 2.0,” a new wave of flavours and foods taking hold. While items like sushi and pad Thai are now familiar to most consumers, more complex and “true-to-region” Asian foods will gain ground in 2015, according to Sterling-Rice Group, a Boulder, Colo.-based marketing firm that works with top food and beverage brands. “We’re going to see deeper flavours coming from Asia… flavours that are spicier, savvier and funkier,” says Kara Nielsen, culinary director at Sterling-Rice Group.

“Asian food tends to go sweet to accommodate the North American palette, so it might have some sweet and some heat. We’ll start to see those flavours dimensionalize,” says Nielsen. “In a number of Asian restaurants, chefs are returning to the food they grew up with. They want to explore different regions and bring in or recreate authentic ingredients.”

Specialty food companies and private label brands already market a variety of ethnic condiments and spices to meet the needs of niche markets. But for mainstream food manufacturers, the key is to incorporate flavour trends in a way that will appeal to the masses. Campbell Company, for example, captured the trend toward Korean and Thai food with three flavours under its new Everyday Gourmet brand: Korean Beef with Noodles, Thai Tomato Coconut, and Creamy Thai Chicken and Rice – a tamer version of its top-selling foodservice division soup, Wicked Thai with chicken.

“It’s finding a balance of bringing those ingredients and flavour profiles in a way that’s approachable,” says Moya Brown, vice-president of Marketing at Campbell Canada. “For Campbell, these are unexpected [flavours]… and Everyday Gourmet is really the brand for us where we bring more leading-edge trends to the soup aisle.”

Another trend that Campbell Company has noticed is the rising popularity of Middle Eastern food, which experts say will continue this year and beyond. In 2014, Campbell launched its Everyday Gourmet Moroccan Spiced Eight Vegetable and Chick Pea soup. “The Moroccan spices appeal to those consumers seeking more of a flavour adventure and something really different in the soup aisle,” says Brown.

At upscale Toronto restaurant Byblos – which incorporates Moroccan, Israeli, Lebanese, Greek and Turkish cuisines – diners are drawn to the simple but flavourful spices of the Middle East and Mediterranean, says executive chef Stuart Cameron. These spices include dukkah, an Egyptian nut and spice blend, and za’atar, a mixture of sumac, sesame seeds and herbs. “People want to be excited when they have new flavours and spices that they’ve never been introduced to before,” says Cameron.

McCormick also sees a move toward Middle Eastern cuisine and has identified Middle Eastern mezze as a top trend on its 2015 Flavour Forecast. Citing garlic pepper labneh (yogurt), garlic hummus, and tomato and roasted red pepper spread as examples, McCormick’s report states that these “distinctive dips and spreads, packed with zesty herbs and seasonings, offer an approachable and delicious introduction to a vibrant global cuisine.”

“We have seen mezze around for a while, but people are getting more accustomed to those flavours and they’re popping up everywhere,” says Cloutier.

In the press, harissa – a hot chili pepper paste used in Middle Eastern and North African cooking – has been dubbed “the next sriracha,” the Asian condiment that became a global sensation. At Byblos, harissa paste is incorporated into a variety of dishes, such as whole lobster with harissa butter herb and preserved lemon salad. While Cameron doesn’t think harissa paste will take off quite like sriracha, he says, “it’s one of those staples in Moroccan cuisine that everyone knows really well. It’s been around for a long time and it’s the go-to spicy taste.”

Certainly, not every flavour will hit the mainstream and it can take years for cutting-edge trends to trickle down into the packaged food world. McCormick’s 2015 trends “are about two or three years out, so they’re still very much in a white tablecloth atmosphere,” says Cloutier. How a flavour truly catches on, he adds, comes down to the flavour showing up in different foods, and people becoming more accustomed to it and “falling in love with that flavour profile,” says Cloutier. “The demand starts to be driven through the love of that flavour or trend. Then it starts to get momentum and build, and eventually goes mainstream.”