How and why aquaculture in Canada should continue to expand 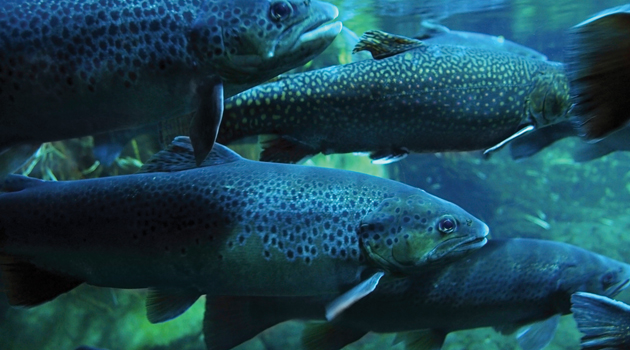 Aquaculture in Canada is big business — and if those in the industry have their way, it will be much bigger in the future. This, says the Canadian Aquaculture Industry Alliance (CAIA), will lead to more jobs, expanded economic opportunities for First Nations, rural and coastal communities across the country, and greater potential for Canada to benefit from international trade agreements.

With operations in every province and the Yukon, Canadian aquaculture is a $2.75-billion industry. It also employs over 14,500 full-time workers, but since about 2002 sector growth has been stagnant. The time to change that is now, says Ruth Salmon, CAIA executive director. “About half of the seafood sold in Canada and worldwide is now farmed, and global demand for seafood is rising rapidly at a pace of seven to nine per cent each year,” she explains. “Demand for all Canadian aquaculture products far exceeds our current supply, so we need an answer to the question of whether Canada will meet future demand with imports, or will we reassert our leadership and grow? Key competitors such as Australia, Norway, Chile and New Zealand are growing their industries and we need to do the same, now.”

The reasons why growth has stalled in the past decade are not hard to pinpoint. Salmon says it’s mostly a matter of a regulatory system that is overly complex and confusing, with lots of federal and provincial overlap. “This of course imposes undue and uncompetitive levels of burden on companies, and so you don’t see the growth and investment in Canada that we have seen in other countries,” she notes. “We’ve got a patchwork of statutes created decades ago to guide wild fisheries, and the solution is a robust and supportive national strategy with a new vision and concrete actions to implement much-needed reforms in legislation, regulations, policy and programs. Over 30 years of studies, committee reports and expert opinion that all recognize the need for new legislation.”

The CAIA believes clearly defining aquaculture, reaffirming federal commitment to promotion, research and enhancement of the sector, streamlining regulations and so on will lead to a moderate increase in sustainable production, which in turn will double economic activity and full-time jobs in the sector within 12 to15 years. “According to the federal Department of Fisheries and Oceans’ own estimate, with a comprehensive regulatory regime in place, Canadian aquaculture output could increase by about eight per cent within five years,” Salmon notes.

The Maritimes and beyond

Anyone familiar with the Canadian aquaculture sector has heard of Cooke Aquaculture, established in 1985 and headquartered in Saint John, N.B. It has grown from a small operation to a fully integrated international firm with operations in all the Maritime provinces, as well as in Maine, Chile, Spain and Scotland. Cooke Aquaculture processes and sells Atlantic salmon, sea bass and sea bream, with annual sales valued at nearly $1 billion. Vice-president of Communications Nell Halse says they have currently been developing new products such as candied salmon, building relationships with leading chefs such as Rick Moonen and supplying new customers. “Where possible, we try to implement our successful model of vertical integration,” Halse explains.

New Cooke farms in Nova Scotia are now being created to supply a new processing plant in the Shelburne area. Cooke is also expanding its feed mill in Truro and building a new hatchery near Digby. In addition, this year the firm acquired a salmon-farming company in Scotland, has expanded its sea bass and sea bream operations in Spain, and is exploring opportunities for growing its Chilean salmon business.

In Newfoundland and Labrador, Cooke is focused on working with the government to fully implement “Bay Management” and on the development of the necessary infrastructure to support further expansion of aquaculture in the province. In the Coast of Bays region, specially constructed wharves are used exclusively by steelhead trout farmers to reduce the possibility of cross-contamination from other vessels. This year, the government of Newfoundland and Labrador invested $4 million towards construction of an aquaculture inflow wharf in Milltown in the Coast of Bays area, the fourth in the region. The government states that in total, $8.6 million has been allocated to advance aquaculture infrastructure projects in theCoast of Bays area since 2013, with overall investment to date in biosecure wharf infrastructure currently standing at $14 million.

Newfoundland and Labrador also recently provided about $80,000 to implement a software-based Sea Lice Decision Support System within the province, which will permit the aquaculture industry a far greater capacity to monitor and mitigate the impact of sea lice as this powerful tool will be used to monitor their prevalence and in evaluating control programs.

Cooke is in agreement with the view that aquaculture expansion in Canada has been limited by lack of federal legislation for aquaculture, and names itself a strong supporter of the CAIA and its National Aquaculture Development Strategy. So is Miranda Pryor, executive director of the Newfoundland Aquaculture Industry Association. “We are fortunate to have continuing and tremendous provincial support here,” she says. “We’ve also had companies investing in research over the last few decades to discover how to farm here.” The main species farmed are mussels, Atlantic salmon and trout, but Pryor notes that there is growth in all species occurring, with Newfoundland well-positioned to provide fresh products along the U.S. east coast. Asia and Europe are other key markets.

“Few regions in the world can match Canada’s natural advantages when it comes to aquaculture,” Salmon notes. “We have long coastal areas, an abundance of cold, clean water, a favourable climate, a rich marine and fishery tradition and established trade routes to the U.S., Asia and Europe. We produce some of the finest farmed salmon, trout, oysters, scallops, and mussels in the world.” She adds, “Canada enjoys high-value jobs and rural opportunities from the sector. If we want to continue to supply our own market and enjoy more economic activity from this sector, we must act now.”