Attracting the next generation of food & beverage professionals 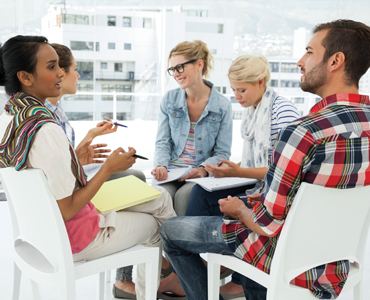 There’s no disputing it: the food processing industry has an image problem, which makes it difficult to attract young, bright talent.

“I’ll say this much: the word ‘processing’ is almost a bit of a swear word to people,” says Craig Youdale, dean of Niagara College’s Canadian Food and Wine Institute. “It doesn’t sound as interesting as the culinary side, working in restaurants or hotels. Everyone loves food, but processing and packaging food doesn’t really turn people’s cranks. Part of the challenge is getting them to see [the sector] in a more sexy way and understand that there’s opportunity for them.”

As those in the food processing industry know, it’s not all about hairnets and production lines. There are occupations in quality assurance, food safety, food science, research and development, engineering, sales and marketing, finance, and the list goes on. However, among the general public, there’s low awareness about the scope of career opportunities in the sector.

Research from Food and Beverage Ontario (FBO) found that less than one quarter of Ontarians have a positive perception of jobs and careers in the industry, and nearly half are unsure. “Most people think of the food and beverage processing industry as being boots-on-the-plant-floor, manual labour, boring and not well paying, which is very far from the truth,” says Norm Beal, executive director of FBO. “Technological advancements have been dramatic over the last 20 years, and those boots-on-the-floor jobs are very high-tech jobs involving robotics. There is some manual labour of course, but we need to broaden how people think about the food and beverage processing industry.”

Today, much work is being done to raise the profile of the sector and make it an attractive career choice. In March 2016, FBO

launched its Taste Your Future campaign, which aims to draw attention to the abundance of jobs in the sector. The Taste Your Future website shares stories, videos and articles outlining education and job opportunities.

This past February, Taste Your Future launched a bursary contest to award students who have innovative ideas. Students were invited to submit a video showcasing their idea for a new product, process or technology for the food and beverage industry. Winners were awarded $2,000, as well as industry mentorship and resume coaching. Post-secondary schools including Niagara College, University of Guelph, Durham College and University of Western Ontario helped promote the contest to students.

Isabel Dopta, director of Communications at FBO, says it’s too soon to determine if the Taste Your Future campaign has moved the needle on awareness. But, “we think we’re starting to move forward because we have the colleges and universities engaged,” she says. “We’re using them almost as our ambassadors and our champions.”

Dopta says it’s of interest to the schools to promote the food processing sector since many have made investments in food-related curriculum. FBO is also getting in front of students who are in other programs that can be transferred across sectors. For example, Dopta was recently on a panel at the University of Guelph’s business school, judging MBA students on how they responded to an ethical dilemma within the food industry. “We’re getting them exposed to the food industry because [as business students], they might be thinking about the financial sector or the health sector,” says Dopta. “They might not necessarily think there are opportunities in the food industry…so we’re trying to broaden that out now.”

While the future of the program is uncertain — government funding runs out in January 2018 — FBO would like to roll out Taste your Future nationally. “Although Ontario represents over 40 per cent of the food processing that goes on in Canada, this is a prevalent problem within other provinces: [lack of] knowledge of the industry and no coherent attraction strategy long term,” says Beal. “We can’t be here today, gone tomorrow, because that just confuses the message. We’ve got to build a long-term, sustainable way of keeping food and beverage processing jobs top of mind.”

Jennefer Griffith, executive director of the Food Processing Human Resources Council (FPHRC), supports the idea of a national campaign. “It could be much larger and have many more arms and spokes to it,” she says. “Government could support that as well, but their whole piece around that is every sector is looking to get these same young people. So, it’s sometimes a hard sell to government.”

For its part, FPHRC has a Career Focus program, which provides funding to employers to hire graduates under 30 years old with a $1 to $1 salary match up to $20,000 annually. The program, which has been running for nine years, is funded by Service Canada. However, Griffith says the program is not being supported this year, as the government is shifting its funding towards green jobs and the summer employment program. “They’re not saying it’s abolished and it’s not because of performance or that it’s not successful,” she says. “I think there are a few other factors that played into this decision. Hopefully it will continue the following year because it’s a very popular program and it gives young people the opportunity to set a career path in the industry.”

On the educational front, colleges and universities have recognized the need for more programs focusing on food processing. Niagara College, which has had a culinary arts program for more than 40 years, has offered a three-year advanced diploma called Culinary Innovation and Food Technology for the past five years. The program, which accepts 24 students each year, combines culinary skills with topics like food science and product development.

On the research side, the Canadian Food and Wine Institute’s Innovation Centre works with small- and medium-sized food processing companies. Students and faculty members help businesses solve problems, develop new products and create new concepts. Putting more emphasis on food processing came down to simply realizing there was a massive need from manufacturers for skilled, educated people, says Youdale. “[Food processing] is about a $40-billion business in Ontario and there weren’t many dedicated educational pieces to this business. And so, we thought we have the expertise to fill that gap.”

A key piece of the puzzle is promoting the food processing sector to high school students. The University of Guelph’s Ontario Agricultural College (OAC) developed a liaison program six years ago, and works with high schools through their specialist high-skills major programs. OAC’s efforts include educating high-school teachers and guidance counsellors about opportunities in the food sector, as well as hosting students on campus, where they can learn about the university’s food and agriculture programs.

“We provide special learning and professional development opportunities for teachers and students, and then those become awareness-raising opportunities in terms of what’s available for students in the sector,” says OAC dean Rene Van Acker. “For us, that has made a difference and we have seen year-on-year increases in applications to our programs for the last six years, so that’s very encouraging.” OAC is also looking at developing a new undergraduate program that would be a mix of science and management for students interested in the food sector. Van Acker says the college hopes to have the program launched next year.

Another avenue to a career in food processing is the Youth Into Food Processing program, which was launched in 2014 by the FPHRC, Toronto District School Board and City of Toronto. The training and certificate program includes seven weeks of in-class training followed by work placements, and is open to post-secondary graduates up to age 29.

The program was born from the City of Toronto’s Entry Level to Food Processing program, which launched in 2012 and is still running. “That program is really successful… but it led us to look at what we can do for non-entry level positions in the food industry,” says Michael Wolfson, food and beverage sector specialist at the City of Toronto’s Economic Development and Culture Division. “One of the issues that we had come across was that there was a real lack of knowledge among youth that the food industry was not just a good place for employment, but it was a good career path.”

This past March, the City of Toronto and Centennial College hosted a workshop on attracting millennials to careers in the food and beverage processing sector. Students, graduates and food companies took part in discussions about what millennials are looking for in a career or in a company, employers’ conceptions about millennials, and what they have to offer young people.

“My takeaway from that event and the work that I have done with the many food manufacturers in Toronto is that the HR practices that have worked in the past are not going to work for this generation,” says Wolfson. Millennials, he explains, don’t want to stay in one job for 10 years, they want flexible hours, they’re more interested in work/life balance than previous generations, and they want to know that the company they’re going to work for is doing some good in the world, not just creating profits. Says Wolfson: “There will come a time when [millennials] will make up the majority of the workforce, and those companies that have updated their practices will be the winners.”