A novel, net-zero packaging for milk 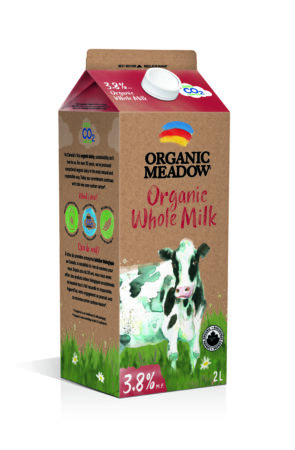 Ontario dairy pioneer Organic Meadow made a splash a decade ago when it introduced returnable glass bottles for its premium organic milk brand to the marketplace. Now the company is making hay with another novel milk container that again connects sustainability with the healthy and responsible nature of organic dairy products and production.

Since October 2021, Organic Meadow has been selling its five varieties of 2L organic milk in brown, carbon-neutral cartons.

Made by global packaging leader Elopak from unbleached paperboard and with one less layer of packaging than traditional milk cartons, the new packaging generates net-zero emissions of carbon dioxide.

Organic Meadow is the first dairy producer in North America to use the carbon-neutral Pure-Pak cartons, which were developed in Europe. The effort earned the Guelph-based (Ont.) business the top award for innovative packaging at the Retail Council of Canada’s 29th annual Canadian Grand Prix New Product Awards in June 2022.

“Sustainability is engraved in our DNA,” Maurice Bianchi, Organic Meadow’s vice-president of sales and marketing, told Food in Canada in a phone interview. “We are organic pioneers in Canada (and) we always pursue sustainable options when they become available.” 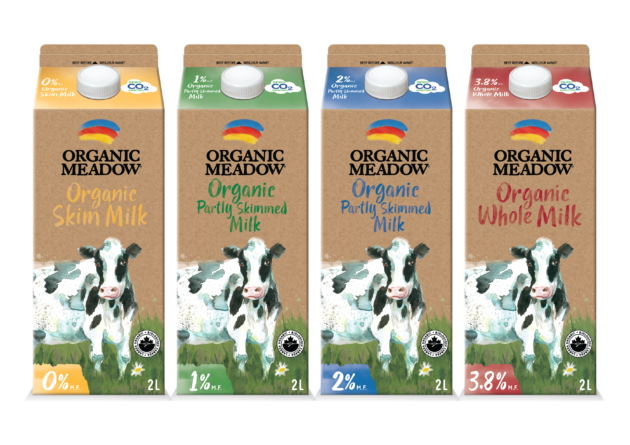 In addition to its carbon-free footprint, Bianchi said the tortilla-brown hue and brightly coloured letters, logos, and artwork on its new milk cartons—including a bucolic painting of a milk cow in a grassy meadow—have been a hit with organic milk drinkers from the get-go.

“Retail reception has been extremely strong,” said Bianchi. He added the fully recyclable, visually appealing cartons “catch people’s attention” and “jump off the shelf” in organic dairy sections of the many health food and grocery stores across Canada that carry Organic Meadow’s lineup of products, which includes milk, cream, kefir, yogurt, cheese, butter and ice cream.

For Bianchi, the advent of carbon-free milk cartons is a welcome advance in the always-challenging issue of sustainable packaging facing food and beverage makers of all stripes. The issue takes on added importance for organic food makers like Organic Meadow, whose core customers are people in search and/or need of natural and/or organic alternatives to conventional products that are made according to sustainable organic farming and processing values, methods, and practices. 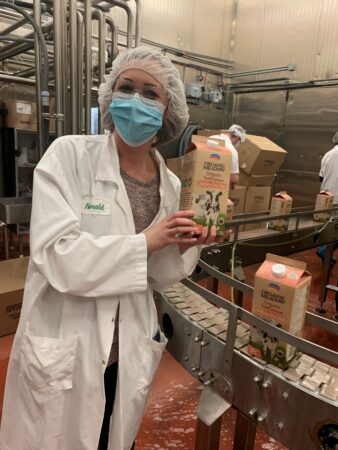 The brown cartons are 18-per cent lighter and generate 27-per cent less CO2 than traditional milk cartons.

It’s been that way since 1989, when a half-dozen organic dairy farmers in Durham, a rural community an hour’s drive north of Guelph, founded Organic Meadow as a small co-op with the vision to build a sustainable system for the manufacture of wholesome organic dairy products.

“They were a very tight-knit bunch who honoured and were guided by values like sustainability, authenticity, community and quality,” said Michelle Schmidt, Organic Meadow’s senior marketing manager.

For dairy products to be sold as organic, producers must be certified as organic. Certification requirements include managing crop and pastureland without the use of synthetic fertilizers or genetically engineered or modified organisms and feeding antibiotics-free cows and heifers only natural and organic grasses and grains.

Despite the higher production costs and marketing headwinds from public debate and bad press about the benefits of consuming pricier organic dairy products (a July 2018 investigative story by the Toronto Star entitled ‘Milked’ notably concluded organic milk was no different than conventional ones), organic milk production has continued to grow in Canada.

The co-op grew to the point where in 2010 it opened the first fully organic dairy in Eastern Canada and the first independent dairy to be built in Ontario in 20 years.

Some 50 people work at the 22,000-sf facility in south-end Guelph, where fluid milk from organic dairy farms across Ontario, which represents 60 per cent of company sales, is minimally processed using HTST pasteurization and used to fill all sizes of Organic Meadow milk containers, including 500 ml and 1L cartons, 4L bags, 946 ml glass bottles and the new 2L zero-carbon cartons.

For the past decade, the company’s best-known container has been its returnable glass bottles, which were introduced in 2009.

“They’re an iconic throwback to the old days,” said Bianchi, a marketing expert who worked for 14 years at both Schneider Foods and Maple Leaf Foods before joining Organic Meadow in 2013. “They’re also a perfect circular packaging  method with zero waste.”

Returnable bottles, however, come with sizeable costs and challenges. In addition to being heavy and breakable, they also must be picked up at retailers who charge a $2 deposit and then sanitized, and heat treated for reuse up to 10 times, or until the label wears out.

The company has continued making bottled milk since 2015, when it was acquired by Agrifoods Co-operative. Organic Meadow is one of a half-dozen brands that now belong to the Burnaby, B.C.-based, farmer-owned co-op, which has nearly 3,000 members and makes dozens of wholesome, premium-priced foods and beverages that are sold at retailers across Canada.

Bianchi said he was all ears a year ago when he first heard about Norway-based Elopak’s carbon-neutral Pure-Pak milk cartons, which had been successfully tested in the European food market. A deal was quickly struck to bring the zero-CO2 container to Canada for Organic Meadow’s 2L format.

“It made sense for us as innovators and pioneers in the Canadian organic dairy marketplace,” said Bianchi. “It’s not easy to come up with new products or sustainable initiatives that we can build on. But packaging is an example of something we have control over.”

Toronto-area design packaging agency Davis was hired to help come up with a visual plan to make the humble dairy cow the hero of the new carbon-neutral milk carton. An artist was notably commissioned to do the watercolour portrait of a Holstein cow that appears on the distinctive brown cartons, which are 18-per cent lighter and generate 27-per cent less CO2 than traditional milk cartons.

For now, Bianchi says Organic Meadow will continue to use the new container exclusively for its five 2L varieties of organic milk, which include 3.8 per cent, two per cent, one per cent, skim and lactose-free.

“We’re extremely proud to be the first dairy to bring this innovative new carton to Canadians,” said Bianchi. “It’s not a huge step in terms of sustainability but it’s a first one and maybe it will lead to other brands and groups getting on board.”

This article was originally published in the August/September 2022 issue of Food in Canada.